And the rain came down

I haven't stepped outside the door today, it's been non stop rain the whole time. There are more terrible floods in other parts of the country, here is not too bad, the water seems to be draining away down into the river below. I was listening to the traffic reports on the radio this afternoon, there was a lot more reports than normal, due to all the road closures because of the floods. I'm glad I don't have to go anywhere, home is the best place to be at the moment. I would like to go a walk though, as soon as it stops raining.
Today I've been pottering. I have a big bag of apples given to me, so I stewed several in a pan. This will do for putting on porridge, or bran flakes, and for puddings with some yogurt on top.
I remembered that I read on a blog somewhere about making some coasters, but don't ask me which blog, I read so many. I read things then forget where I saw it. Was it your blog? Think it could have been Mum, or Briony. It is a simple idea, something to pass an hour or two. I cut four pieces of foam. 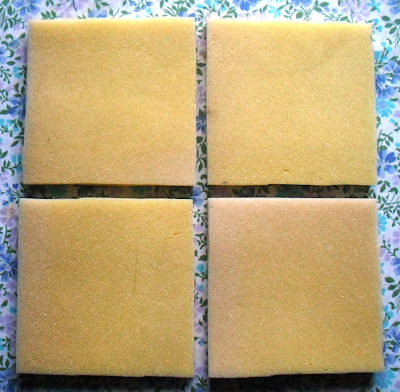 Then cut eight pieces of cotton fabric slightly bigger than the foam. Sew them together right sides in, making four pockets. Turn the right way, stuff the foam inside, and hand sew up the openings. Then run round and round in a spiral with the machine. Four coasters. Thank you for the idea, whoever you are. 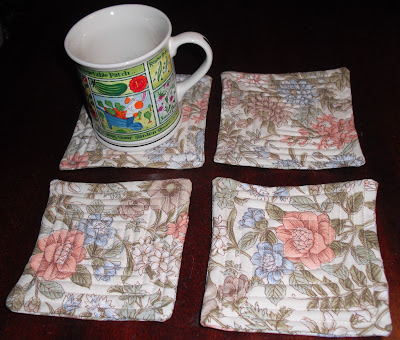 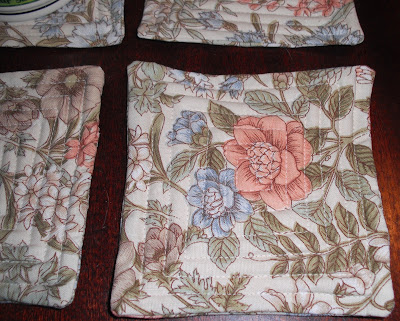 I spent a couple of hours catching up with TV programmes on the iplayer. Oh dear, more weeping over 'Last Tango in Halifax'.  Did you see it? It was so emotional at the end, I thought Alan might die. Such a relief when he didn't. I do hope they make a follow up to it. I also caught up with Coronation Street, poor Tyrone, he's certainly going through it at the moment. I caught an episode of Last of the Summer Wine on Yootoob, it's great that you can see tele programmes on there, when they are no longer on tele.

Anyway, I'm off to read a book. Oh nearly forgot, I have enabled comment moderation, something I have never done before. I am getting more and more spam, need to get rid of it before it gets to the publish stage, and I can't be having any more bun fights.
Toodle pip.
Posted by Meanqueen at 20:05