Another day of rain so no walking today. I went to the bank in town and paid my water bill, any excuse to get out of the house. It was busy, shoppers scurrying from shop to shop, loaded up with carrier bags, trying to dodge the rain. I just ambled around thinking thank goodness I don't have to do that. I bought some wash up liquid for 39p from Home Bargains, cooked ham for the cats for 99p, water colour paints for £1, something to play with, reduced crisps from Poundstretcher, and potatoes and sprouts from Aldi. I almost went into Thorntons and bought a bag of treacle toffee but thought better of it. I saw a programme on the iplayer about sugar addiction, the presenter had diabetes, and my friend has recently been diagnosed with it. I don't want to find myself in the same boat, with no teeth left, so common sense prevailed.
There was such a lot of Christmas stock left on the shelves, the newspapers are reporting that sales are down on last year. Only two shopping days left, I can't see them shifting it all. It would be a good idea to buy up whatever you need for Christmas 2013, after Boxing Day, when the prices will be slashed.
The police were out in the town, they had a mobile office parked in the shopping precinct, and these two gee gee's were strolling around being patted by all the small children, and me. They will probabaly be out later on tonight rounding up all the drunks staggering around and collapsing in the street. Gorgeous horses. 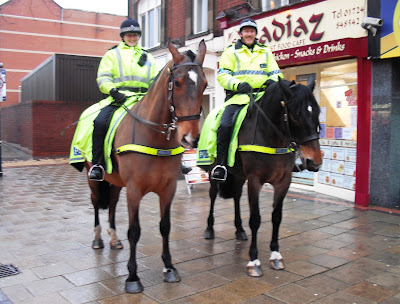 A bit of good news landed on my door mat today, a letter from HM Courts & Tribunal Service. Phew, I don't have to go to court, that's a relief. It's also a bit of a shame, I would like to go and listen in on a case or two, just out of interest, but it wouldn't be right to sit on a jury if I couldn't hear every word. I don't think they would like it if I kept saying 'pardon'. 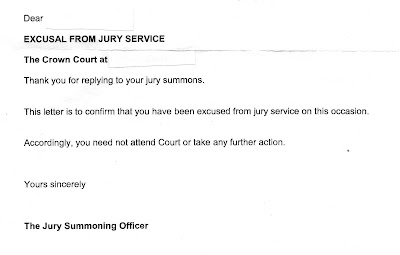 Dinner was quite simple tonight, no picture, you know what a plate of iceberg lettuce and a load of cous cous and grated cheese looks like. I didn't need a big meal as I had a big lunch again, well it was a second, late breakfast actually. My first breakfast was eaten in bed, a bowl of cereal, I didn't get up untill after 10am, no point when it's wet and dark and miserable outside.

I mentioned paying my water bill, it was £42.75 for six months. This is for 9 cubic metres of water, and disposal of the same amount of dirty water. I pay Anglian Water for this. They break the bill down into £13.02 for the actual water, and £14.95 for a standing charge. Then £14.88 for taking it away. There will be another bill coming soon from Severn Trent, they charge me £28 for the surface water drainage.

I've opened a bottle of red wine tonight, a cheapo one for under a fiver, it will last me three, maybe four days. I must say I am not very impressed with it, and wouldn't recomend it. Typical Spanish plonk, it's called, Las Primas, Gran Familia, Tempranillo. On the label it says it's fruity, soft, and spicy, with berry and plum flavours. I reckon it would do a good job on cleaning up the family silver. I need to go and brush my teeth before they turn a funny colour. Have a good weekend. Toodle pip.
Posted by Meanqueen at 21:14