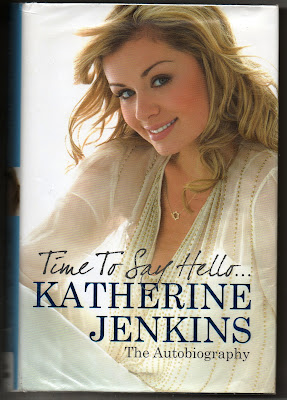 Katherine's story reads like a fairy tale. Girl from a working class background who lived in a semi detatched council house in a small Welsh town, becomes an international singing star. She started singing at the age of four, when her mother taught her a simple song so she could enter a talent contest at school. Even at this early age Katherine had decided that all she wanted to do was sing. At every opportunity she would sing, joining several choirs.

She won the title BBC Welsh choirgirl of the year, and soon after she won a place at the Royal Academy of Music. The early death of her beloved father saddened her, but she was determined that she would carry on as he would have been proud of her.

She was summoned to the studios of Universal Music and sang before a panel of experts, and was offered her first recording contract. I won't tell you any more as it will spoil it for you if you want to read it. It's very easy reading, a lovely story to snuggle up with at bed time.

I've found a little clip for you. A stunning performance with the Mormon Tabernacle Choir. Bypass the first minute of it, move the slider along.

Toodle pip.
Posted by Meanqueen at 19:23