I'm a tele catchup on the computer addict ;o)

Here it is, the cheapest, quickest, pan of veggie stew ever. Take one 10p bag of prepared root vegetables, dump in large pan. Add shake of turmeric, black pepper, veg stock cube, one chopped up leek. Add the magic ingredient, a tub of home made mushy pea soup. Simmer for ten minutes. Take off heat and stir in a few pieces of garlicky cheddar cheese, and two spoons of cous cous. Stand for five minutes and it's ready. There's enough for three or four servings, but I scoffed half of it tonight, and I'll eat the rest tomorrow. It was deeeeelishus. 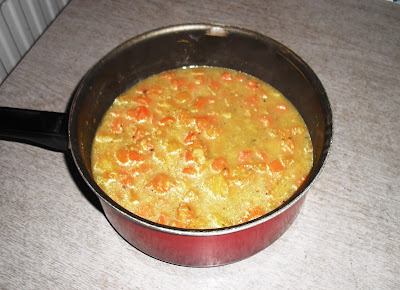 It's been trying to snow here today, not settled yet, but who knows what will happen during the night. Probably be white over in the morning. Two dog walks done today, I decided to stay on tarmac and walk around the streets. It's like a mud bath on the tracks around here, best to avoid in the winter, not much fun for the dogs though, can't let them off lead so much.

I've just been watching the third episode of a drama/comedy on the BBC, it's called Last Tango in Halifax. Is anyone watching it? The main actors are Anne Reid, Derek Jacobi, and Sarah Lancashire. The acting is superb. It's about an elderly couple who meet up again after 60 years. They were childhood sweethearts but went their separate ways. Both are widowed, now they want to get married. There are a lot of twists and turns in the story, it is getting quite exciting. If you haven't seen it you can catch up on the BBC iplayer.
http://www.bbc.co.uk/iplayer/episode/b01p1q71/Last_Tango_in_Halifax_Episode_1/
This is also on yootoob. I see that someone from Ontario has commented on it, so I think it maybe available to our overseas readers. Give it a try. I'll put the link here and hope it works.


One of my favourite programmes is back again, An Island Parish, again on the iplayer. The first series was about the Isles of Scilly, then there was a series about the Isle of Barra off the West Coast of Scotland, now it is about Sark, one of the Channel Islands. The original storyteller died halfway through the last series, but this new chappie does the job very well with his softly spoken gentle voice. Another good programme to snuggle under the duvet and watch.
http://www.bbc.co.uk/iplayer/episode/b01nzqyq/An_Island_Parish_Series_7_Best_Foot_Forward/

Right, I'm off to watch the Christmas edition of Super Scrimpers, it's on Channel 4. here's the link if you want to watch it.
http://www.channel4.com/programmes/superscrimpers/4od#3446889
They rang me up a few months back and asked me if I had any money saving tips for Christmas, with the view of me going on the programme. I said, yes I have, don't do Christmas, ha ha. I don't think that is what they had in mind, as I wasn't invited to appear. Oooops, never mind. Toodle pip.
Posted by Meanqueen at 20:02