Worth Fighting For. Book review.

I think most people will have seen Patrick Swayze in either Dirty Dancing or Ghost, two of the well known films he stared in, I loved both of them. Two beautiful love stories with beautiful endings, I'm a big softie when it comes to slushy romance. The story inside this book has the makings of another love story, this time a true real life love story. 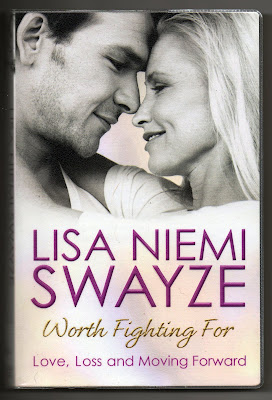 Lisa Niemi and Patrick Swayze first met as teenagers at his mothers dance studio, they laughed, danced and loved their way through the next 34 years together. In January 2008, Patrick was diagnosed with pancreatic cancer. The book follows the 21 month long journey of how they both never gave up hope that a cure would be found.

I wasn't sure if I wanted to read a book like this, dying is not something I want to think about unless it affects my family or close friends. I was expecting it to be hard going and emotionally draining, it was neither. Lisa shares the details of Patricks long battle, describing how they endured his last days. She shows that no matter how dark the future may seem there are always reserves of strengths to call upon, and Worth Fighting For is about how to make it through each day.

They managed to pack a hell of a lot of living in the time they had left, despite all the pain and suffering Patrick was going through. They regularly flew themselves in their own aircraft from home to the hospital for treatment. They both had a pilots licence and were often arguing about which one was going to be Captain when it came to making descisions during the flight. At one time they came up against a huge black storm cloud and couldn't agree whether to fly over it or under it. A call to their flying instructor came back with the answer, you fly though it, that's what you have the instrument panel for.

The way the press hounded them was shocking. I remember seeing photo's of him in the papers when he looked so poorly, and thinking why can't they leave him alone.

Patrick carried on working whenever he could, taking five months to film a TV series, then later working with Lisa on his biography. Every time he changed his chemo there was another lot of side effects to cope with. They always felt that if he could keep going for longer then a cure might be found. Sadly it wasn't to be, he died at home.

Lisa writes beautifully about their love for each other, their love of dancing, of their ranch, of their horses and their dogs. She took charge of all his needs while he was ill, she devoted every minute to looking after him, preparing his medicines, and getting him to appointments. I feel that this book would offer some comfort to others who might find themselves caring for someone with terminal cancer. It's about taking one day at a time, but it goes much deeper than the day to day nursing, it's about a couple who never give up hope. It's about a celebration of the kind of love which can sustain you in the most difficult of circumstances. It's a beautiful story.