Two old bags up for grabs

Oh bother, I was going to give you a step by step tutorial on how I made these two bags, but the pics have disappeared. I know I took them but for some reason they have not appeared on the computer. It could be because the battery ran out halfway through taking them and I had to recharge it. Oh well, never mind.
The one on the left is made of all the small offcuts I had left. I pinned them together like a jigsaw puzzle, overlapping the edges, making the two sides. The edges weren't straight so I trimmed them before I stitched them together. Told you I would get another bag out of it. The yellow flower I hand sewn it on, I am not very good at going round corners with the machine. If anyone wants one of these pop your name on the bottom and I'll draw a couple of names out. You don't get to choose which one. As my mum used to say, you have what you get, ha ha. Closing at 8am Friday morning. 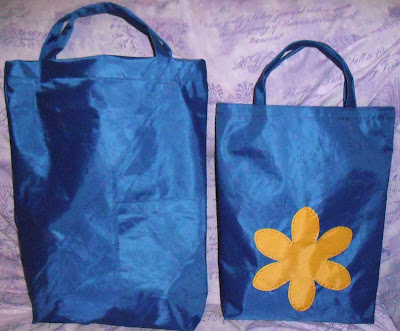 Bet you can't tell what this is. Give up? Ok I'll tell you. There is a bench I walk past which is made of rough wooden railway sleepers. If you look close it is covered in tiny shards of frost. Isn't it pretty. 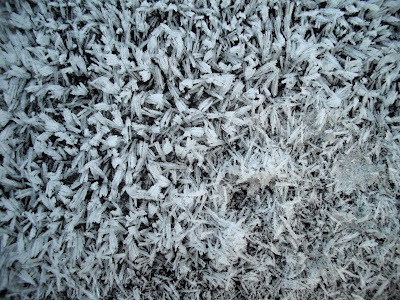 A bit further along is a crack with a weed growing out of it. 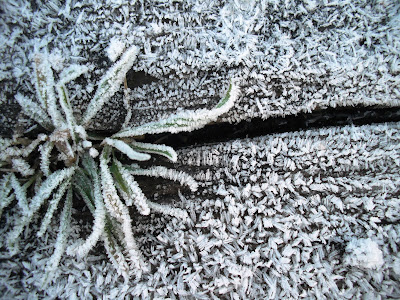 And a bit of green moss. 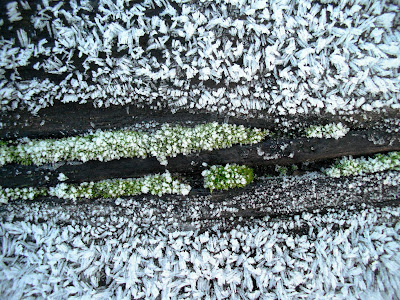 It's like magic the way the frost clings to everything, turning it into a winter wonderland. 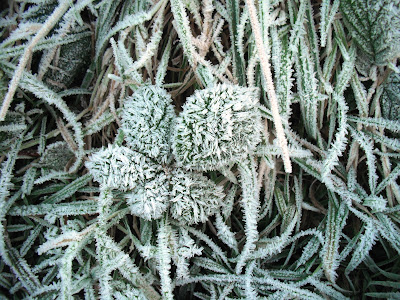 This is really amazing, some dead flower seed heads in a front garden caught my eye as I walked past. 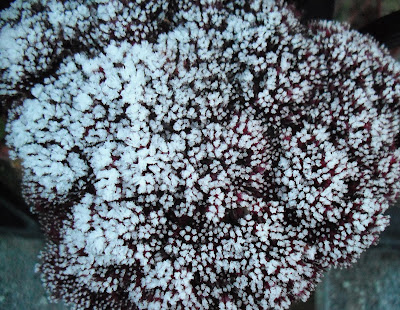 The quarterly gas and electricity bill popped through my door today. Both are estimated, but it doesn't matter, it's about right. £82 for both, which is £8 more than the same period as last year. That will do fine.

The man from Anglian Water is coming in the morning to fit my water saving bits and bobs. I'd better have a bit of a tidy up. Can't wait to see his face when he finds my bath full of water, and a bucket of rainwater next to the downstairs toilet, for flushing, ha ha. Oh heck, I shall have to get up early, he could arrive any time after 8am.
Toodle pip.
Posted by Meanqueen at 19:39