Drowning in a bath towel

Here is a picture of me holding up a very big towel, I think it is what's called  a bath towel, or maybe even a bath sheet. Anyway, it's far too big for me, I only have a small body and don't need something this size to dry myself with. Oh I know some people would get out of the bath and wrap a big towel around themselves, then lounge about in it for an hour afterwards. There's none of that here, far too flippin cold. It's a case of a good rub down and put my clothes back on before I freeze my tits off.
The towel was given to me, it's a good quality towel bought from Dunelm. The thing is, if you have a very big towel, only the middle bits get used, so therefore you are washing a lot of towel for nothing. It also takes up a lot of room in the washing machine, meaning more loads are needed which will cost more money in electricity, water, and wash powder. Anything which is going to cut down the amount of washing has to be a good idea. 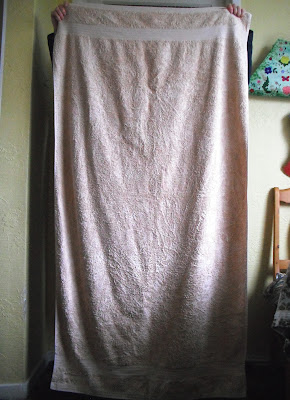 So this is my idea. Cut the chuffing thing in half. Fold it equally in half and cut it down the middle. 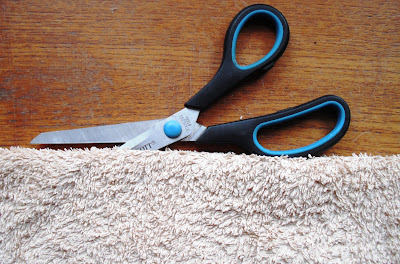 Get two pieces of broad ribbon, fold it in half lengthways and iron flat. 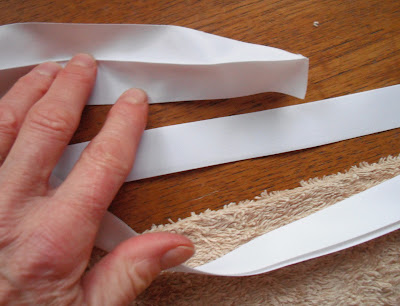 Sew it along the cut edges to prevent fraying. I did two rows of machine stitching on each half, so it won't come adrift in the washing machine. 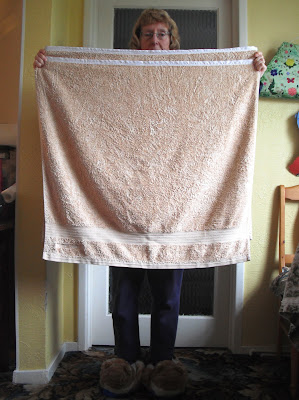 Now I have two, more practical size towels, which will easily do the job. Good idea eh! If there's anything not quite right in this house, there's always a simple solution. So, if you are running out of smaller towels, don't go out and buy new if you have one of these in your cupboard. Just cut it in half.

It's raining here again in my corner of North Lincolnshire. Hope it's better where you are. Enjoy your weekend. Toodle pip.
Posted by Meanqueen at 13:06