Come trucking with me ;o)

D'ya know what, I think it's about time I did another trucking tale :o) My job was such a large part of my life, 32 years in fact, that memories come creeping back every so often, especially when I look at my photo albums. So, I have picked out one particular load I did, which certainly was memorable. I have a stack of Movement Orders, that's the paperwork which has to be completed every time a large, abnormal or heavy load goes out on the road. I can read through these and it all comes flooding back to me. Ah yes, I remember this one alright.
There were two loads to be shifted from Serck Baker, Bristol Road, Gloucester, to Goole Docks. Mark took the lead, and I tagged on behind. Due to the size of them, we each had a mate to sit in the passenger seat, a legal requirement. The description of the load states that they are two Filter Packages, the loaders called them Water Filtration Plants. We are using semi step frame trailers to keep the height down, they have smaller wheels and a lower bed. Total height is 17feet 9inches. The trailers are also extendables and are stretched out to accommodate the load, giving a total length of 68feet. There is a side overhang, which hangs lower than the trailer bed, along the bottom on each side are two iron girders. The overall width is 13feet 4 inches. My vehicle is plated for a gross weight of 75 tonnes, Mark's is 80 tonnes, these come in well under that at 58 tonnes apiece. I think they look pretty cool, don't you. 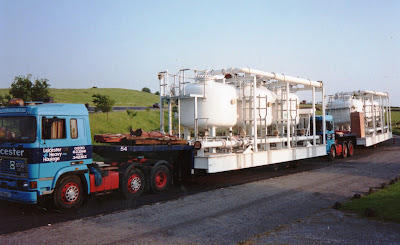 I climbed up on the back of Marks load to take this photo. You can see on the neck of the trailer that we carried tarpaulin sheets, and an assortment of timber, we never knew exactly what equipment we would need, so we had to be prepared. In the box on the side of the tractor unit we had straps and ratchets, chains and tensioners, shackles, and on the back of the cab we had bundles of ropes. You don't see that now because hardly any loads are roped and sheeted these days. 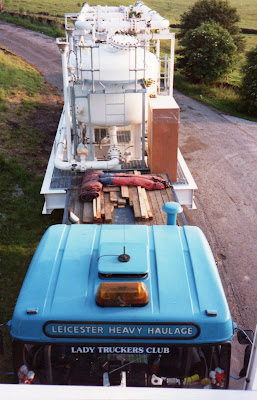 We set off on a nice morning on the 11th of July 1990, from Gloucester, taking mainly 'B' roads, we needed a route with no bridges because of the height. These loads were escorted all the way by the police. The route is worked out months in advance, and all police forces, and highway and bridge authorities were notified. We passed through, Gloucestershire, Hereford and Worcester, West Midlands, Staffordshire, Derbyshire, South Yorkshire, North Yorkshire, and Humberside.
Things were going well, it was a bit of a tight squeeze sometimes, going along the leafy country lanes, so we had to take our time, driving very carefully. The police were there to warn oncoming motorists to move over to let us pass. On a normal single road the police always escorted from the front, on a dual carriageway or motorway they escorted from the back. The police no longer offer this service, the haulage company have to provide their own escorts, which is usually a works van with chevrons painted on it and an orange flashing beacon on the top. I must say, having the blue flashing light there was a comfort, knowing they would back you up if any motorists got a bit stroppy, and they did.
We weren't long into the journey, and mid afternoon a teriffic bang made me jump out of my skin. My first thought was that a tyre had exploded. I checked my mirrors and realised it was my trailer and not Marks that was affected. We all stopped and got out to inspect the damage. Oh dear, not a tyre, but one of my air bags on the suspension on the back axle of the trailer had disintigrated, bits of rubber littered the road. The whole thing was listing over to one side. That trailer aint going anywhere till it gets fixed, I thought.
I rang our boss and was told I would have to wait there until the fitter arrived in a van, from Leicester, to come and repair it. The police decided that Mark should carry on, as it would cause too much disruption to traffic if we both blocked the road, so they took him further on.
With everybody disappeared, I sat and waited, and waited, and waited. The fitter arrived at about 4pm. I told them to bring some new tyres as well, because I was not happy with two of them. Then it started getting dark and the fitter worked on. I had to put the hazard warning lights on, and the orange beacon on the top of the cab as well, as it was becoming dangerous with this hulking great thing blocking the road in the dark. At last everything was fixed, and I was ready to go, it was midnight. I rang the police and asked them to come back and escort me. They didn't want to, saying couldn't I wait till morning. I said, no, definately not, I couldn't go to bed worrying that something might come round the corner and crash into me. Besides, I would never sleep with the cab being lit up like a Blackpool tram. They came out and they took me to where Mark was parked up, it was 1.30am. Boy was I tired, I was glad to get to bed.
Later on in the journey, we were parked up on the Leeds Ring Road, it was busy but quite a wide road. Our escort had left us and we waited for the next one to come along and take us further on. The car arrived, and parked at the front of Mark's lorry, so we got out and walked up to speak to him, to discuss the route we were taking. A few minutes later, there was another terrific bang, oh no, now what's happened. We could not believe our eyes, when a car came along with it's side ripped out. The woman driver, on seeing the police car, decided she had better stop. I felt ever so sorry for the lady, she was so upset, and very apologetic that she had driven into the side of my load. The iron girder overhang had put a log gash in the car from front to back, opened it up like a tin opener. What a mess, but why didn't she stop when she first hit it? It would have done a lot less damage. Panic I suppose. She said, she didn't think she had room to get past. Not a very good judge of width obviously, there was enough room to get a double decker bus through. Poor lady, she was all of a dither. The policeman felt sorry for her as well, he decided no further action was needed, and allowed her to carry on to her sisters house, just up the road. I looked at the damage to my load, there was none, apart from a bit of paint scratched off on the back corner. 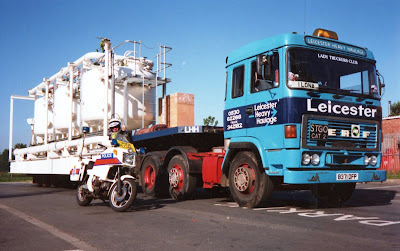 We arrived at Goole Docks without further ado, and there was a crane there to meet us and load them straight onto a boat. D'ya know what, it was quite an eventful journey, ha ha.

Thanks for your comments on yesterdays post, d'ya know what, you made me laugh.
Toodle pip.
Posted by Meanqueen at 21:39