Tales of the Gypsy Dressmaker by Thelma Madine. Book review.

It's taken me three weeks to read this book, picking it up for twenty minutes at a time just before I go to the land of nod. I can't seem to find time to read during the day, far too much to do, so a little read in bed sends me nicely off to sleep. I never did see the TV programmes about gypsy weddings, so I didn't have much idea what this book was about when I took it off the shelf at the mobile library. 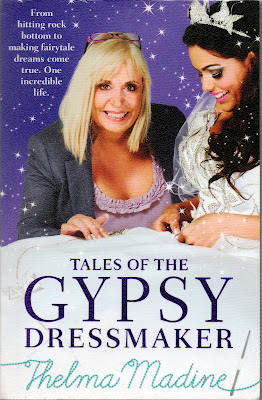 Thelma Madine tells an interesting story about her dealings with the gypsy travelling community. After her marriage broke down and a messy divorce, she found herself skint and living on benefits with children to support. She looked for some way to make a living, using the skills she had as a dressmaker.

One day she was asked to make some dresses like 'Gone With the Wind', and it wasn't long before she had dozens of travellers asking for the same. A few years later she was asked to make a wedding dress with a 107 foot train, and eighteen bridesmaid dresses. From then on she was known as the dressmaker to the gypsies.

There has been a lot of ups and downs in Thelma's life, one of which was that she spent some time in prison. She fraudulently claimed benefits while not declaring her earnings from her business. She admits it was an oversight on her part as she was struggling to pay her bills.

I always thought it would be nice to be able to move around the country and go wherever the fancy took me. It conjurs up a romantic nomadic lifestyle, where all the stresses of life can be left behind as you move on. Thelma's insight into the travelling world is a bit of an eye opener. I had no idea that there are quite a lot of millionaire travellers who have substantial properties in Ireland, yet they choose to live in caravans. They are very secretive about the wealth they accumulate, but not afraid to splash the cash when it comes to flash cars and expensive weddings.

The life of a traveller is far more complex than it appears. We see them in their encampments, and we see them in the news when they are turfed off a site for which they haven't got the necessary planning permission.

Read Thelma's book if you want to learn about gypsy travellers. This book will shock, amaze, and make you laugh, and bring the secretive traveller world to life.
Posted by Meanqueen at 22:16