I can't be bothered with all this.

If I can't moan here, where can I moan? What's got my back up, what's bugging me, and what's stopped me from going about my daily business until I get this off my chest? There's steam coming out of my fingers as I give the keyboard a bashing.

Chuffin British Gas, what a chuffin pain! I've been plodding along with them for years now, everything running tickety boo. Meters are read, bills are accurate and get paid when they arrive, no need to upset the applecart by changing suppliers, if it aint broke then don't fix it.

Now they want to change my electricity meter for a new all bells and whistles, smart meter, apparently they can read it remotely. They try and make out that it will benefit me because I will have more control over how I use my electricity, it will help me monitor how much I use. They don't know that I am not thick. I know that when you flick more switches the little wheel whizzes round faster and faster, and before you know it you can wrack up hundreds of pounds on the next bill. I know all that, that's why I am careful not to leave things switched on. I don't really need a new meter, the old one works perfectly fine.

They sent me a letter asking me to ring and make an appointment for the exchange. I did, and was put in a queue by an automated voice. I got fed up of waiting and hung up. I tried again a couple of days later, another queue. I have got better things to do than to hang around here, another aborted call. Then another letter arrived reminding me I needed to contact them. Another try and another 'give it up as a bad job'.

At the fourth attempt I got through to a human voice, albeit a foreign chappie who I could not fully understand. Not his fault he is in another continent, he needs a job as much as anyone, I just wish they could bring all these call centres back to Britain. I struggled on with him, gave my details to confirm who I am, and managed to pick a few words out and get the gist of what he was saying.

Then it transpired that he was not the one who could make the appointment so I was put on hold, while he contacted the department dealing with meter exchanges. He got back to me in a couple of minutes and gave me another number which I should call, and said that department would be ready to take calls in a couple of hours because they were not ready yet. So I washed the pots while I was waiting.

Then I had a phone call from British Gas Customer Service, an automated call, asking if I would give my opinions on the previous interaction with them. Wanting to give them a piece of my mind, my chance to say what I think, I agreed to take part in their survey. What a waste of time that was. Another machine asking the questions, I am supposed to press the buttons on my keypad on a scale of 1 to 10, the first question I pressed 5, and then the robot asked why I had chosen that response. From then on I was flumoxed, I hesitated and it spewed forth a load of letters, I didn't know what to press after that. I gave up. Are there any humans working for British Gas???

I have just been onto the Brit Gas web site to register a complaint there, and guess what, 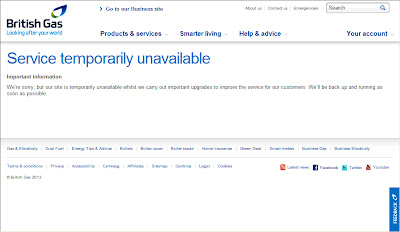 Oh, chuffin heck, what a palarver. Will my meter be changed, or not. At this point in time, I don't give a stuff. I might try ringing the new number that the foreign chappie gave me, or then again, I might not. Depends if I've got time. Toodle pip.
Posted by Meanqueen at 10:41