Tales of a Tiller Girl by Irene Holland. Book review

Hello, Here is a blast from the past, does anyone remember The Tiller Girls? I remember them from Sunday Night at the London Palladium, mum would let us watch it, then it was straight off to bed afterwards, school in the morning.

I thought they were marvelous, and would often copy them doing the high kicks, I could never keep up though without losing my balance. I could see myself on the stage, but the nearest I ever got to a dancing career was three months with Mavis and the Silver Stars, but had to give up because mum couldn't afford the lessons, the shoes, and costumes.

I digress. I've just finished reading a smashing book written by Irene Holland, who started life as Irene Bott, but she was asked to change it when she became a Tiller Girl. She chose to dance under the name of Irene Starr. Her book, Tales of a Tiller Girl, is an amazing account of her early life in London, through to the the present day. She was born in 1930 near Wandsworth Commomn, but sadly her father died when she was two years old, so she grew up with her brother and mother. Dancing was always her passion from an early age, and her mother who was a musician went off touring with a band just so she could afford to send Irene to Italia Conti stage school. In three years she was trained in all types of dancing and singing.

Things didn't always go smoothly though, her height she wasn't tall enough for the Blueball Girls, she sustained back injuries, and the war got in the way, but at the age of eighteen she was accepted into the world famous high kick dancing troupe, the Tiller Girls.

Irene has so many incredible stories to tell, from the stars she performed with at the Palladium, Frank Sinatra, Bob Hope, and Danny Kaye, to entertaining the soldiers and becoming their pin up. The book is also an interesting insight into war torn Britain, and how it affected ordinary working people.

Irene is now 84 and lives in Devon. I've found this short biography about her, if you are going to read the book you might not want to read this, as it gives away the ending of her story. I must say, from a tough start in war torn London, her story has a wonderful heartwarming ending.

I have found this ITV news report from July 2014, about her returning to The London Palladium. There is a short video to click on. All that dancing must have been good for her, she certainly doesn't look 84.

Give this book a try if you like autobiographies, it's an easy read, and entertaining. 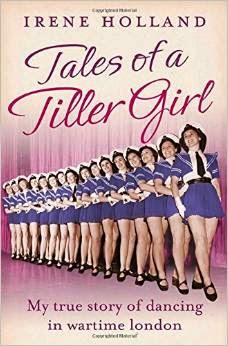 Welcome to the new readers, I hope you enjoy your visits. We've had snow here, and I hear there's going to be more, so I won't be going far. Keep snug, wrap up, and watch tele.
Toodle pip