Hello. This weekend is the North Lincolnshire Artists Open Studios. Some of the artists work from home so they throw their doors open to anyone who wants to visit them. I go to the Ropewalk in Barton on Humber where there are several artists studios in the one building.
I particularly like visiting Michael Scrimshaw, he is my kind of artist, making sculptures from piles of junk at his workshops at home. He looked a bit tired today as this is the second weekend of Open Studios and he has been talking to a lot of visitors. He soon perked up though as our conversations got underway.
Both he and his wife are real arty types, and money savers, so we get on really well. They both have long hair down to their waist, Michaels being a mass of dreadlocks, which must be quite heavy.
A lot of his work is commissioned, and is on show in public places. He tells me he is learning to play the violin, and after only one month of practicing, he can play quite a nifty Irish jig. I must admit I spent that long chatting to them I only had time for a quick in and out at the other studios. 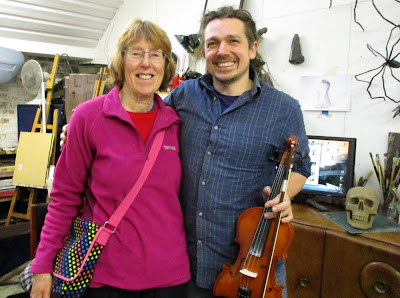 Moving swiftly on, I forgot to mention this the other day. I was in the town and went a bit further up the High Street than I usually do. There is a Herons Foods shop which I have never been in, so I thought I would check out the prices. It's not a very big shop, just two aisles.

These items were 60p each or two for £1. So, 120g of beans for £1. On the Tesco web site a 850g bag of sliced beans is £1. Sliced mushrooms, 900g is £1. At Tesco a 500g bag is £1. So these are the better buys. You might want to check out your Heron Foods if you have one. I shall be walking that extra few hundred yards up the High street again in the future, to keep my eye on the bargains there. 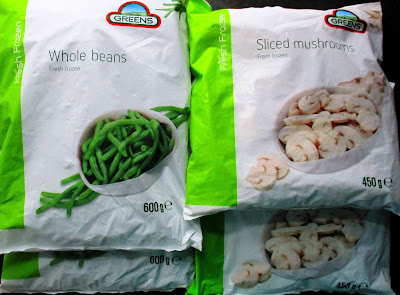 That's all for tonight folks. Thanks for popping in, have a nice Sunday, we'll catch up soon.
Toodle pip