Our cats are happy cats

Do you remember Elmo, he looks very sad here. He spent a week in my cat room and then we put him in a pen at Sue's. He perked up a bit because he had other cats around him and he could watch what was going on over the whole garden. Well, a bit of good news, a nice couple came to see him last night and they fell in love with him, and he is due to go to his new home tomorrow night. He was very happy to have some visitors and went straight to them to say hello. I am so pleased, their home is just perfect for him. 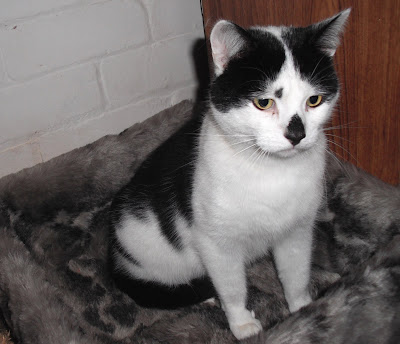 The man paid us a nice compliment. He said he had been to look at some cats at the RSPCA, and was saddened to see how they were kept in rows of pens which were nothing more than a cage. He said the cats looked nervous and frightened. He liked the fact that our pens are full of toys and our cats are so friendly and confident. We told him that's because Sue spends hours with them, stroking them, and playing with them. Also both me and Janet visit regularly to see how they are. We don't have many cats, but I think we are doing things right by keeping them happy while they are with us.

Our next job is to get our mum cat spayed, give her a days rest away from her kittens, and after that there will be a space to move big boy Bobo across to the pens. He is a little bit sad at the moment because he sees cats in the garden and he wants to go and join them. He won't have to wait much longer.

I got my hair trimmed this morning at my friend Julie's house. She had booked a hairdresser to come and cut her and her husbands hair, so I asked if she would have time to do mine as well. It just worked out nicely I arrived five minutes before it was my turn. I hate going to the haidressers, hate waiting, I want to be in and out. So ten minutes later and £5 lighter, I was dun. Julie and hubby are going to Spain tomorrow for a couple of months, they are driving there, with Jessie blind dog on the back seat. The dog is well used to travelling she has been many times before. There is a special deck on the boat for dog walking, with cleaning equipment provided for tidying up after them, if you get my gist :o)

I spent the afternoon walking, helping my friend Helen deliver the Parish Newsletters around her village. Some of the letter boxes are quite difficult to find, wouldn't you think it makes sense for everyone to have them on the front door. No, they are on back doors, on posts, on wooden gates, set in the wall, anywhere. Some houses don't even have a letter box, I gave up looking for it at one house and shoved the newsletter through the cat flap.

I nearly had my fingers trapped a few times. Some of them have a flap on the inside of the door as well as the outside, you try and push it all the way through and find your hand is jammed as you try and withdraw it. And those with brushes fitted in the box to supposedly keep the draught out, are a flippin nuisance. Anything you try and push through gets crumpled and creased and ripped. What a daft invention that is.

The terraced houses in a row are easy to do, just zip along them, but the big posh houses with long driveways, and those set on a hill with loads of steps to climb, take ages going up and down and in and out. I try and cut across garden to garden if I can, and hope no one sees me, ha ha. At least it keeps me fit, and although I might moan a bit, it is surprisingly good fun. I wouldn't want to do a regular paper round though, or be a postie, or do door to door catalogue selling, now that would be boring.

A quick and cheap dinner tonight. Two big spuds in the microwave, two grilled veggie sausages, with half a tin of spaghetti in tomato sauce over it. About 50p, and I'm full. See ya. Toodle pip.
Posted by Meanqueen at 17:34