Here's one for Toffeeapple, she doesn't like tapioca pudding :o) The cooking instructions on the side of this packet are incomplete, due to me removing the 'whoopsie' label, silly billy. I marked the price on the front to remind myself how cheap it was if I didn't use it up immediately. I bought it from Asda at around March time 2010, so it's a bit out of date. It's been sat in my cupboard for ages, and I haven't found any inclination to use it. I well remember this frog spawn pudding from school days.

Anyway, in these times of austerity, a buzz word which everyone seems to be using now, I have got to make an effort and use up every single item in my store cupboard. I think it is recommended to cook this in the oven, but as my oven doesn't work properly, and I wouldn't use it anyway even if it did, I thought I would try it in the slow cooker. Quinn makes rice pudding in a slow cooker, so I wondered if this would be the same. 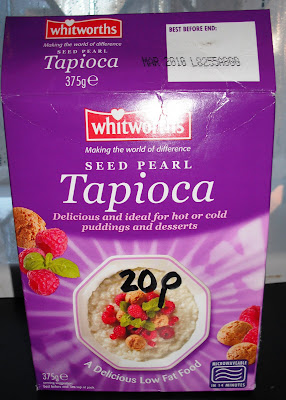 I started it off last night, boiled some water in the kettle, added some Coffee Mate, and was intending to leave it all night as I didn't know how long it needed. I checked before I went to bed and found it was cooked, but a bit lumpy, so I transfered it to a saucepan. 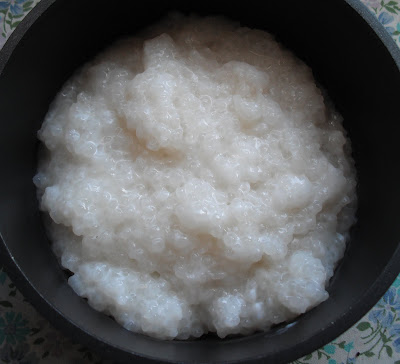 This morning I tasted it, yuk, tastes of nothing, needs some milk and something to sweeten it. I have soya milk on my bran flakes, but yesterday in Tesco I noticed how the price of the organic long life has rocketed to £1.10 from 89p. I started using this one after the price of the soya milk in the chiller cabinet also went up. So now I am looking for a cheaper alternative.

I don't expect the Value one at 65p to be very nice, because the Value yogurts are awful, but it's worth a try. I'll let you know how I get on with that when I open it. I was perusing the shelves of long life milk reading the labels, and found some good old fashioned evaporated milk. I used to love that when I was a kid, maybe this is the time to go back to it. 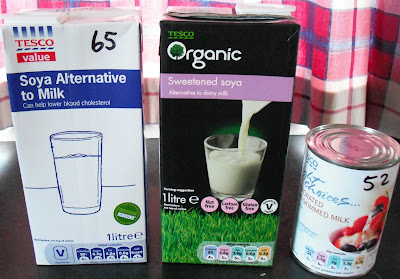 So, I opened the evap milk, poured it into a jug and put it in the fridge. I swilled a drop of water around in the tin and emptied it into the tapioca. Next I added two teaspoons of honey and put it on the stove to warm up. Quick taste, a drop more milk was needed, and hey presto, it's not too bad at all. Frog spawn. 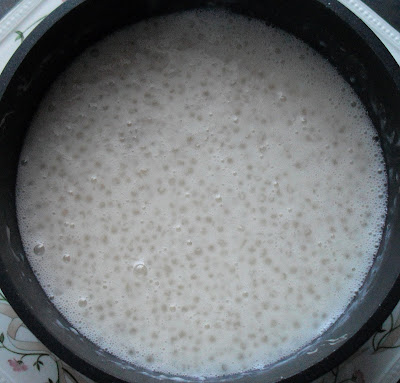 It says on the packet it is microwaveable so I will try that next, there is plenty left. I am determined I am going to eat it. I should add here that I don't eat puddings after a meal, because my meals are so filling. My puddings come any time I fancy one, breakfast, elevenses, mid afternoon, or bed time.

Tomorrow I will try diluted evaporated milk on my bran flakes, if it tastes alright I will make a switch to that. In my coffee I always use Coffee Mate, I buy it cheap on offer, and I can get zillions of cups out of one packet, so very cost effective. It's a cereal day tomorrow by the way, I had a fruit, veg, oats and seeds smoothie this morning, with a cup of green tea. I have updated my food spend diary after yesterday's shop if anyone is interested. Toodle pip.
Posted by Meanqueen at 13:18