A family day out

Hello. I think you might have guessed why I wasn't around yesterday, a trip down the motorway to Burton on Trent. I must say, that the four lane stretch on the M1 is now running smoothly and the journey was done without any hold ups. It's about time it was finished, it has been under construction for what seems like years, and it was getting very tedious to pootle along at 50mph through the roadworks. The traffic in Burton has not improved though, the town seems to be ever sprawling outwards from the centre, new builds bringing more vehicles clogging up the roads. I have no desire to move back there.
Rocky came with me, and after a cup of coffee and a chat to Auntie Pat, I left him with her while I went to the library to meet Uncle Stan. He was happy in his bed. They have a new rescue cat which was very curious to see a dog in the house.
Stan likes to chat, think that's where I have got it from, I found him installed at a table near the exhibition, ready to talk to anyone who wanted the meet the artist. 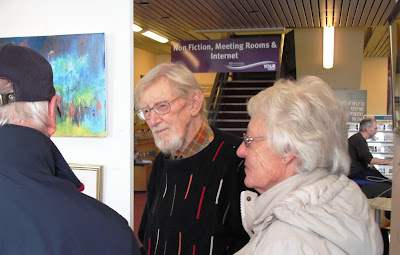 It was difficult to take good photo's because of the sunlight beaming in through the vast windows, and the reflections bouncing off the pictures with glass on them. Some I have seen before, but he has some older and newer ones that I haven't seen. He uses a variety of medium, pastel, acrylics, and oils. Some forty pictures are for sale, all the proceeds are going to the Air Ambulance. 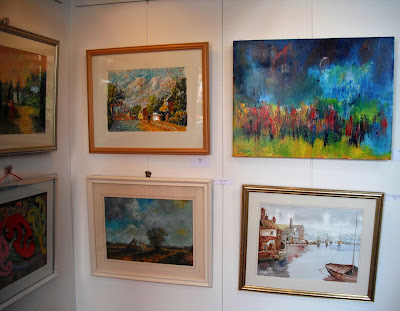 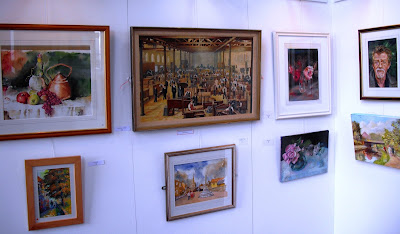 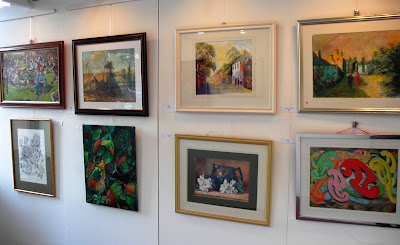 The detail in this one is amazing. 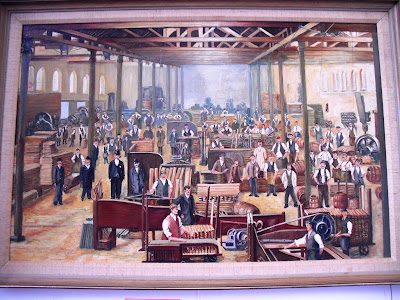 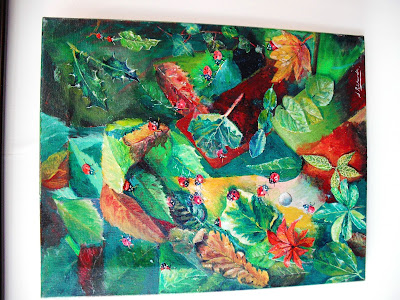 Shame about the reflections on this one, he has got the skin tone perfectly. 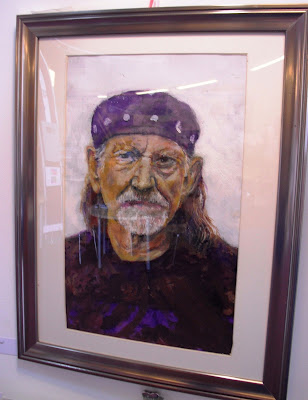 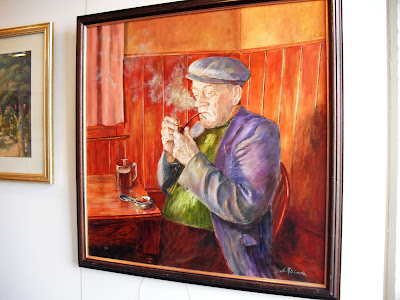 This is what Stan does best, talk. He has been a gents hairdresser for most of his life, at one point having a string of shops. In his later years he scaled the business down to one shop, finishing up with a few of his regular customers coming to his house when the last shop was sold. He didn't need to work, he carried on because his customers were his friends, and the money was donated to Air Ambulance. It wasn't until he was in his late eighties that he finally did the last haircut. 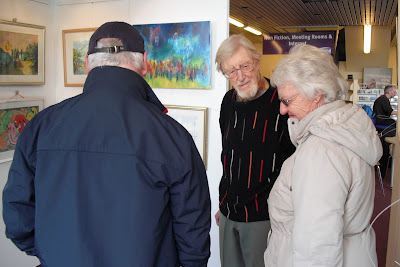 The exhibition is on in Burton Library until Saturday the 23rd of April. 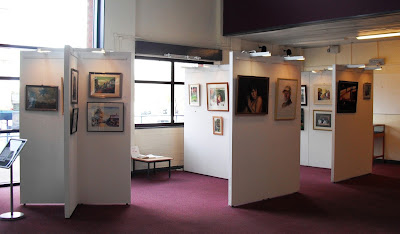 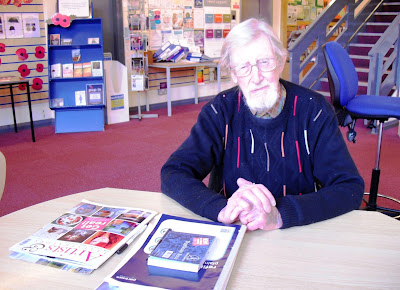 I am very impressed with the library, it was a hive of activity. Spread over two floors, there are meeting rooms for hire, and the food in the cafe is excellent and reasonably priced, I am told. 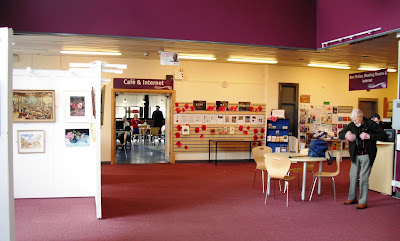 Back to the house for a late lunch. Pat had made a lovely vegetable curry, far better than anything I can rustle up. Stan was whacked, so I left them to their afternoon nap, while I went to visit sister. A couple of hours there for a catchup. Sister was whacked as well after spending all morning getting the caravan ready for their forthcoming trip.

A quick dash up the motorway brought me to Tesco at about 8pm, had to pop in to see if there were any yellow stickers as my fridge is almost empty. Lucky me, there was some fruit and veg. I spent £11, which will see me through next week.

Bits and bobs to do today, need to walk because I missed yesterday. Need to tidy crafty room.

Thanks for popping in. We'll catch up soon.
Toodle pip
Posted by Meanqueen at 11:04