Let's have a catch up

Hello and Good Morning. Let's have a catch up. I feel as if I have been away, though I am still here. Some of my posts are chatty every day stuff, like a diary, but every so often I feel the need to write an article about something that is bugging me. I don't want my blog to turn into another magazine full of articles, and I don't want it to be full of banal chit chat, so you get a bit of everything. Today we'll catch up, it's the weekend, so chill.
There's been a lot going on in the media this week, it was such a shock to hear of Victoria Wood's passing, I don't think anyone saw that coming. Wasn't she just brilliant and talented. I am pleased that her family managed to keep it all out of the press until the last minute. I hate it when news breaks of someone's terminal illness and the press picks it all to bits even before the person has gone. For goodness sake, someone is ill, we don't need pictures of them slipping slowly into oblivion, let's have some respect for the families. Rant over.
The pictures of the Royal Family were lovely, I like that we have a Royal Family and not a President. I have every respect for the Queen, she stepped into her role at a young age, and has given her whole life to her family and her duties. A late Happy Birthday your Majesty.
The pictures of Catherine and William in India were charming. Her dresses were fabulous, and they  both looked happy despite the endless photocalls. They cope with this intrusion very well. As usual there has been a lot of trolls at large slagging them off in the press, I hope they don't read the venomous bile spouted forth in their direction. I don't care how much money they have, or how much they cost the country. They give great value for money bringing in millions of tourists from all over the world. Who would step into their shoes and give their life to their jobs? I certainly wouldn't, I value my freedom.
Look what I invented. I have two watering cans, found in a skip, (house clearance), but they had no sprinklers on them. I need to sprinkle water onto my flower beds, so I found two small plastic bottles that fit the spouts exactly. 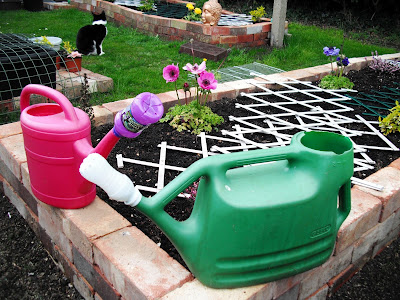 Cut some small holes in the bottom and bingo, sprinklers. Works a treat. 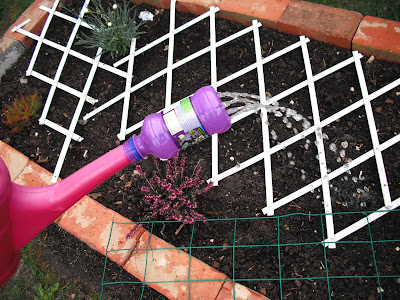 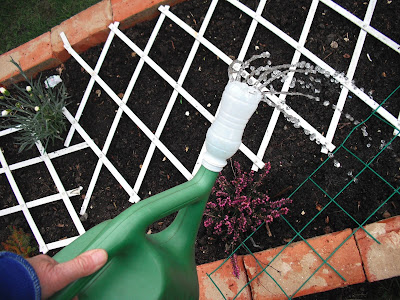 My breakfast this morning. Bran Flakes, nuts, dried fruits, and seeds. Strawberries on a yellow sticker which I found yesterday after calling in at the small Tesco on my way back from the council dump. Grapes I bought a week ago from the big Tesco, also yellow sticker, still fine. Value soya milk and a couple of spoons of Value yogurt. Deeelishus. 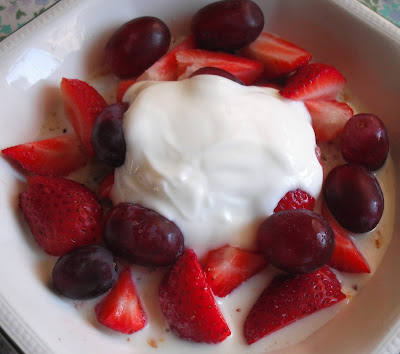 I was in Home Bargains the other day, stocking up on pet food, when I was asked by a young girl if she had seen me on the television. Oooh, I was spotted, ha ha. I think it was the pink sun visor which gave it away. She saw me on the Jo Brand documentary. I had a  lovely chat with her, she doesn't walk a lot, but she loves drumming.

Talking of television, reader John has alerted me to the fact that Rip off Britain starts a new series on Monday, this is the programme I did the filming for in December. Seems such a long time ago now. The programme goes out each weekday on BBC 1 at around 9am, repeated the following morning early, over eight days. I have had a look through the Radio Times schedule. It doesn't give much information for forthcoming programmes but it does say they are investigating sell by dates on Tuesday the 3rd of May. So I think that might be the one. I will keep a look out for anything in the TV magazines leading up to that date. If anyone sees anything, can they please let us know so we can all watch.

It's looking like another nice day, so I'm going to get off this computer and do something else. Thanks for popping in, I hope your weekend is good. We'll catch up soon.
Toodle pip
Posted by Meanqueen at 10:49