Did anyone notice I wasn't around. I went to the school re union, which was also Mr Brodies 90th birthday party. When I was there he taught Art, but he is a man of many talents and taught other subjects as well. I got in the queue to have a few words with him, he was in his element, enjoying all the attention.
The event was organised by Ben Robinson, boss of Burton Albion Football Club, and was held in the function suite at the stadium. Ben was a year above me in school, and has done very well for himself in the sporting world. Such a nice down to earth guy as well. The funds raised went to their charity, Burton Albion Community Trust, and a short presentation was given about the work they do promoting health and well being to all ages.
It was a two course meal, I had the veggie option which was a Quorn pasty with mashed potatoes and peas, and a very sweet posh pudding. I was stuffed. 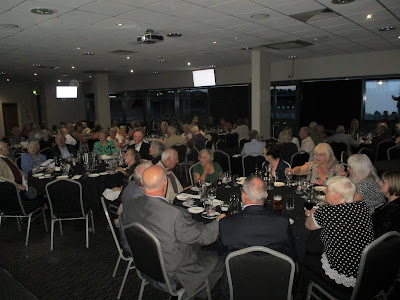 There was a lot of catching up to do. Luckily there were some people from my years, though they had to tell me who they were. It's very difficult to put names to faces you haven't seen for 50 years.

Following the meal there was a very entertaining magician who kept everybody in high spirits. After saying goodnight and goodbye to everyone, it was back to the hotel I had booked for two nights. I finally fell into bed at gone midnight. Don't know how I managed to stay awake, I had been up since 6am, and did a five mile walk in the afternoon around the area I was brought up in.

I have some photo's to post of the 28 miles I walked over the three days. See ya tomorrow. Toodle pip.  ilona
Posted by Meanqueen at 20:39