What's on the menu at Tightwad Towers

Good evening. It's been a mixed bag of weather today, brilliant sunshine, high winds, and dark skies with heavy showers. We were a few short at Crafty Club this morning, I think the weather put them off, it rained about 9.30am just when we walk to the Village Hall.
Not a lot to talk about today, so if news is a bit thin on the ground, fill the space with food. Yesterdays dinner. The cheese and onion pasty has had a few bites taken out of it because I took it with me when I went for a walk. Too much to eat all in one go, so save some of it for dinner. Left over steamed veg from the night before, rocket and shop bought potato salad, and pickled beetroot. 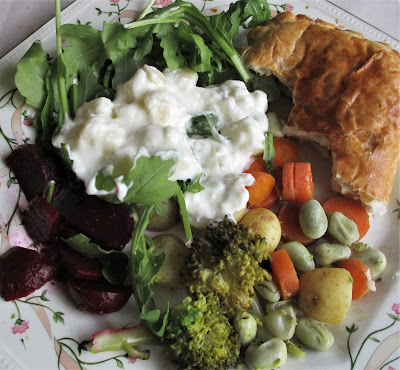 Lunch today was three cheese and onion croquets from the chiller cabinet in Aldi. I haven't had these before but thought worth a try. They were quite nice. the instructions say oven bake them, but I put them under a low grill. I opened a tin of mixed beans and warmed half of them in the microwave. 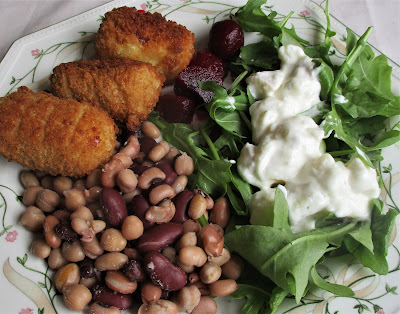 Tonight I wasn't very hungry so I had a cheese sandwich with a dollop of houmous on it. Then an hour later I opened a tin of rice pudding, warmed half of it in the microwave. 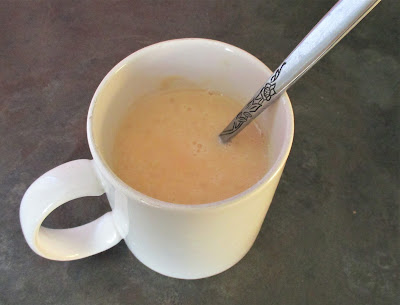 I took Billy out in between showers, we called in to see his best friend Maisie, and the two of them were running around the back garden chasing balls, having a whale of a time.
Now I'm going out for my late village walk. I don't need to do it because my miles are well up, but I feel I want to do it. So off I go.
Thanks for popping in. Toodle pip.  ilona
Posted by Meanqueen at 20:25