Hiya, I'm back, I do love my short de stressing breaks, not that I have much stress in my life anyway :-) My journey was M181, M180 westbound, M18 north, M62 west, exit junction 24 towards Halifax, A646 through Hebden Bridge and Mytholmroyd towards Todmorden, then turn off for Mankinholes.
I arrived at the hostel at 1pm, I fell in love with it as soon as I saw it. After crawling along narrow lanes worried about meeting something coming the opposite way, and having to shunt around a particularly tight right hand turn, there was the entrance. A narrow rough track, should I drive into it, or park and have a look first, remembering my days of driving a lorry into a yard and finding myself unable to get back out again. I took a chance and inched my way between two massive stone pillars that were once gate posts, relief as it opened out into a small car park.
No sign of anyone as this hostel is run by volunteers and the opening time is 5pm. I grabbed a bite to eat from my pack up, and put my boots on. Armed with my map I headed off towards a tall monument on the top of a hill, which looked not too far away. This area is riddled with footpaths, the Pennine Way, the Pennine Bridleway, and the Calderdale way, and hundreds of others. 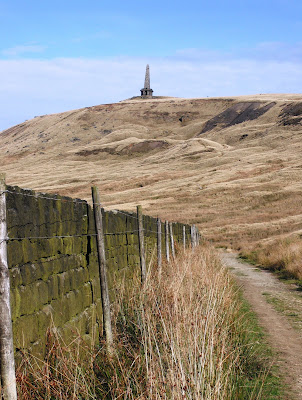 The climb became very steep and I had to have a breather a couple of times. As I sat on a rock a little boy appeared from nowhere, and started chattering merrily away to me. I was just about to ask who he was with, when the rest of the family turned up. Grandma and Grandad, Mum with a little girl, and Dad carrying a small boy. It was nice to see the whole family enjoying themselves. When I reached the top the views were wonderful, well worth the effort. 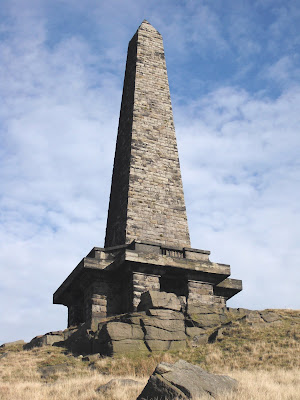 This is Stoodley Pike, it stands at 121 feet tall and was first built in 1814, it collapsed in 1854 after a lightening strike and was rebuilt. 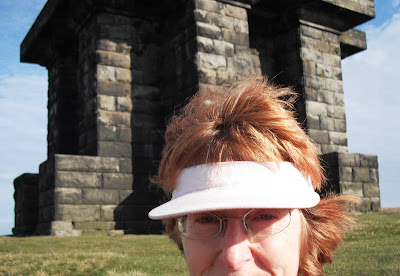 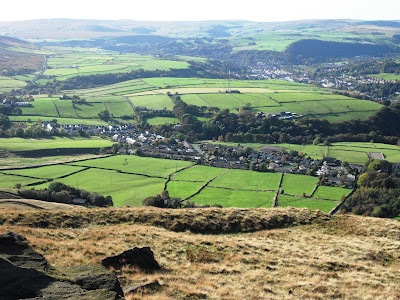 From here I went down the other side, a very difficult walk over boggy ground with no obvious signs of a footpath. It was a matter of looking into the distance and heading for what looked like a stile or a marker post. I reached Withens Clough Reservoir and skirted round the edge of it before returning to the Hostel.
The next day I was up bright and early to get the bus to Todmorden and the train to Manchester. I must say the Northern Rail service was excellent, a clean train, running every half hour, and a reasonably priced day return ticket. I had a bit of time to kill in Manchester so I had a ride on the huge Observation Wheel. It's a bit like a smaller version of the London Eye, only it went a bit faster, a good panoramic view of the city. The pods had smoked glass so I was afraid the photo's wouldn't come out very well. 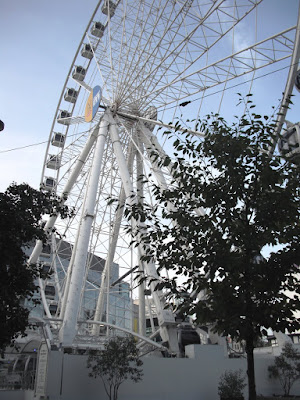 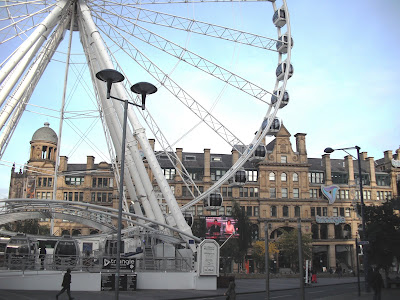 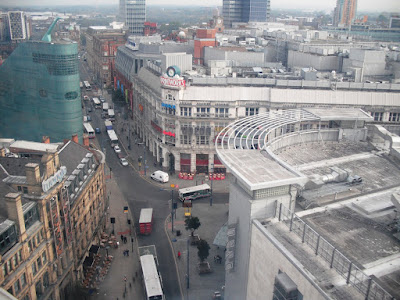 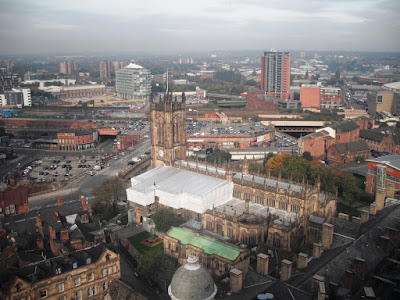 Pity the Cathedral is undergoing renovation and is half covered with plastic sheeting.

I also had time to have a peek inside the Town Hall, a stunning building. 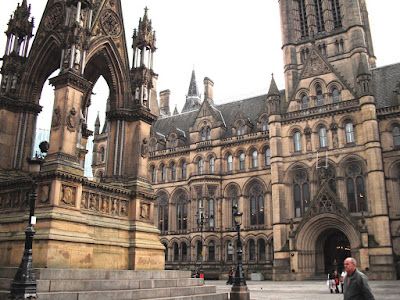 View of the clock tower taken from inside the building. 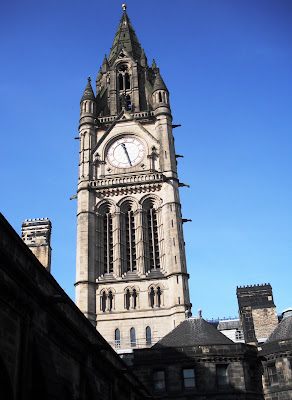 Now it was time to head off for Granada Television Studios, and join the throng waiting to sit in on the recording of a new game show called Heads or Tails, hosted by Justin Lee Collins. There were about a dozen people in front of me, I did wonder at one stage what on earth I was doing there, for a start I hate waiting for anything, especially in a queue. I took a photo of the rather sad and neglected looking gateway which might have been the main entrance at one time. Now it is rather shabby and blocked off. 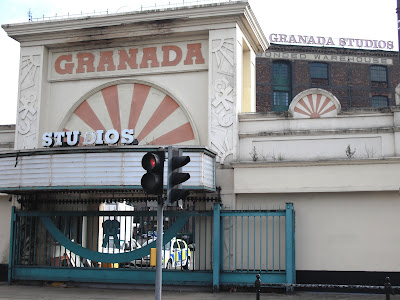 At 1.30pm a young lady came out and checked our names and issued us with wrist bands. We were escorted in and went through the usual security checks, handbag search and metal detector. We were then herded into a room next to the Rovers Return, a replica of the famous pub, not where they do the filming, then we were led into the studios, passing the Countdown clock in the props department.
I got a seat on the second row, and once we were all sitting the warm up people came out and whipped us all up into a frenzy! No not quite that bad, we were given instructions when to clap, cheer, shout, and jump up and down with glee. They recorded all this activity at the start, and then they add it all in afterwards.
Justin Lee Collins appeared next and everyone applauded. I couldn't stop giggling, I thought he was a big chunky guy, what a surprise to see a not very tall, rather weedy frame dressed in a baggy suit. The show got underway, the contestant was a young lady called China, who works in a circus. I couldn't understand how the game worked, other than you could win one million pounds if you correctly guessed heads ot tails all the way through. Maths has never been my strong subject.
It dragged on and on and on. Stopping and starting, surprise guests, lots of banter, I could have happily left halfway through it. Eventually the end was in sight, building up to the grand nail biting finish, would she gamble the £10,000 that she had won, and try for the million. She asked us what should she do, we all shouted. It makes for good television if someone goes for the make or break death. We waited for her answer, 'I will take the ten grand thankyou very much.' A huge sigh from me, and a sort of half hearted cheer from the audience, yay, we can all go home now. Bye the way it will be on Channel Five, not sure when.
Back at the hostel I found I was not the only one staying the night, a man turned up who actually works for the YHA, he had come to do a health and safety inspection. We got chatting he was an experienced walker and very knowledgeable about maps, he gave me a quick map reading lesson. He also had two lurcher dogs in his van, which he had trained for mountain rescue, they were lovely animals. It was nice to have a bit of company.
The next day I was up early again, eager to get a full days walking in before returning home. I picked my route and set off once more into the hills. It was very misty, and at one point it appeared to be getting heavier instead of lifting. I marched on through the swirling fog. Eventually visibility began to improve. 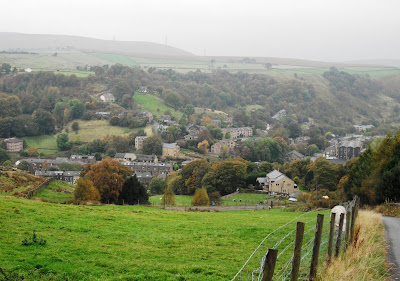 I came down from the hills to walk along the Rochdale Canal for a while. 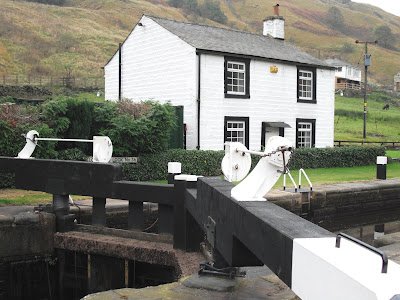 I shared my cheese sandwich with two black cats who lived next to the canal, and on the last leg of my walk I stopped to chat to a man who was repairing a drystone wall. You meet some interesting people when you holiday alone. I arrived back at the hostel at 5pm and said my goodbye's to the wardens, you never know I might bump into them somewhere else one day.
Posted by Meanqueen at 12:07