Make a bracelet out of old pens

The day seems to be whizzing by today, that's probably because there isn't much of it due to the fact that I didn't get out of bed till 9.15am. I know, I know, that's disgusting, I am a slob, but I do have an excuse.
My dear cat Lily who sleeps on the bed with me, insists on trying to burrow underneath the bedclothes. I have to give in because my face would be torn to shreds by his paw as he whacks me with it every few seconds to remind me he is still there. Then he wriggles and squirms untill he finds a comfortable position, I on the other hand have to lie there not moving a muscle in case I squash him. Eventually we both drop off to sleep.
Not for long though, he stands up and jumps down and proceeds to start scratching around on the carpet. I am sure that because it's green he thinks it is grass. I know this is a warning signal for thinks to happen, so I shine the torch in his direction. A torch comes in very handy during the night, it's wind up of course, saves getting out of bed to put the light on, and I don't like being blinded suddenly by a bright light when I am half asleep.
I waited a minute, the scratching continued, then it went quiet. No, it wasn't alright to go back to sleep at this point, just a few more minutes and I would know what to do next. Then it hit me, the vomit inducing smell coming from the direction of the litter box, this cat has forgotten that he is supposed to bury it. Not an ideal situation I know, to have a litter box in the bedroom, but when you have an old boy who has a few senior moments, it's better than scraping it up off the carpet.
I shot out of bed in a flash, and holding my breath I dashed down the stairs with the box, putting all the lights on ahead of me. A quick turn of the door key and I was out on the back yard dumping the box on the ground. Thank you Lily, can we go back to sleep now, I think we will lie in a bit longer in the morning.
I've been wondering what to do with some old felt tipped colouring pens, they were too pretty to throw out. I took all the insides out and trimmed the ends and finished up with mulitcoloured plastic tubes. They have been lying around on my dining room table for ages. I had the idea to make a bracelet with them, but the main body of the pens are made with brittle plastic which doesn't cut too well as it splinters and cracks. The tops however are made out of a more flexible plastic, and trim up nicely with a sharp craft knife.
Here is my bracelet. 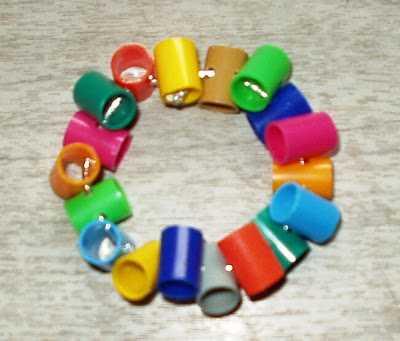 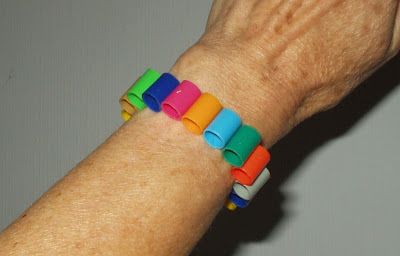 The pieces are half an inch long, I made two holes in each piece with a hot nail, heated over the gas cooker. The holes are not exactly opposite each other because the bracelet has to curve round the wrist, and I didn't want the elastic that is threaded through them to show. Measure the right amount of pieces to fit snugly round the wrist with no gaps. You need to trim the excess plastic from around the holes with a small craft knife. Then tie a knot in the elastic in the centre of one of the pieces so it is hidden. Simple but it looks dead cool.
Posted by Meanqueen at 17:02