Pushed out of bed

Well, Henry has been and gone, the last twentyfour hours have been a bit of a trial for the cats, but we managed. I thought it best to keep them upstairs while Henry had the run of the groundfloor, although he could see them if they ventured onto the top stair. He wagged his tail with glee and barked a few times, when Lilly peeped between the railings on the landing. It's a good job I put a barrier at the bottom of the stairs or he would have been up there like a shot to play with his new friend.

The fireworks last night were a bit of a pain, the cats hide because they are frightened, so I put the radio on loud, and the lights on. I took Henry for a walk at 4pm, and again at 9pm, when hopefully most of them had finished.

Henry is used to sleeping in the bedroom, I hadn't the heart to turf the cats out of there, so I decided to sleep on the settee, because I knew Henry would not settle on his own. All started ok, then Henry became restless, he kept changing his mind and alternating between the floor and the chair. The next thing, he launched himself onto me, we lay together for five minutes squashed onto the two seater settee. I finally gave up as my back was beginning to ache, and I made my bed on the floor, at last Henry is happy and I got to sleep.

Up at seven, out for a walk at quarter past, no time for a drink, Henry is whimpering. We had a long walk, and I had my breakfast when we got back. I was hoping to do a bit of sewing but Henry had other ideas, he loves his blue rubber ball and keeps bringing it back to throw again. There was no settling him, so we went another walk at 11am. My left shoulder feels like my arm has been pulled out of it's socket, hanging onto a big strong dog certainly tires you out. We went down a farm track where I could let him lose, and thankfully there were no other dog walkers about. He just loves water, and of course he managed to find a ditch with a foot of lovely muddy water in the bottom. He thought a good rub down with a towel when we got back was such good fun. At last he flaked out on the floor, and I managed to get back to my sewing. 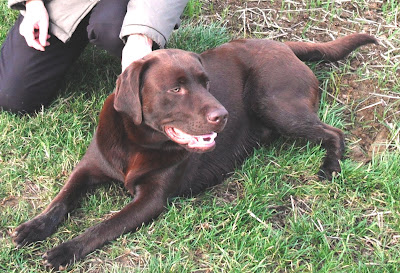