Slap my wrist, I haven't got a post prepared today, so I thought I'd pinch a little story from my trucking tales. I started gathering bits and pieces together for a book a while ago, but I seem to have come to a halt, sometimes the words just dont flow. This tale is from my time at Leicester Heavy Haulage, hope it makes you titter.

Whenever I hear the song ‘Three Wheels on my Wagon’, I think of the time when two of my trailer wheels decided they were going no further, and took a diversion into the woods on the side of the A75, while I was en route to Stranraer. Colin and myself had picked up a couple of heavy lumps of machinery, bound for Belfast, they were loaded on low step frame trailers. We were booked onto the 5pm boat and had timed the journey to the docks just right, only a few miles to go.
I felt a little jolt but thought I had maybe run over a pothole in the road. Suddenly my CB radio bursts into life, Colin, who had been behind me all the way, was yelling at me, “There’s something funny going on with your back wheels, pull over.” Luckily there was a layby just ahead so I swiftly steered into it. We got out to check my trailer, something was missing, there was a gaping hole where there should have been two wheels. The middle axle on the nearside of the trailer had dropped down to within an inch of the road surface because it now had no wheels to support it.
We looked up and down the road, no sign of the runaways. I dropped the trailer and we carried on to the docks, we needed to tell them of our delay, and to get some help. Colin discovered that he couldn’t board the boat because his load was too high, so we were both booked onto the next one due to leave the following morning. I rang Jim, the transport manager, and we were instructed to go back to my trailer and search for the missing wheels, in the meantime he would arrange for a tyre company to come out and put them back on for us.
It was getting dark by this time and I was beginning to see the funny side of the situation, singing ‘Three Wheels on my Wagon’, while staggering about in a pitch black wood, with a small flashlight. Talk about looking for a needle in a haystack. “I’ve found one,” I shouted excitedly as I pushed it up to the road, but we didn’t find the other. The tyre man turned up and said he couldn’t put just one wheel on, there had to be two, but he did have a plan to get me going, he asked me for a chain. He jacked the axle up so that it was raised off the ground, he attached the end of the chain, with a shackle, to a hook on the edge of the trailer on the opposite side. Then he took the chain across the bed of the trailer and underneath the lame axle, bringing it back across. Then, with a tensioner he attached the other end to an anchor point on the trailer and tightened it up. He lowered the jack, and hey presto, it worked. The dangly axle was supported by the chain, and I was able to complete the journey to the docks, get on the boat to Belfast, and drive for an hour to the destination.
When we finally delivered our loads we got the crane driver to lift my trailer onto the back of Colins, he took it piggy-back and I followed him in my tractor unit back to the depot. It's a good job I had a lot of wheels, when you start off with twenty you can afford to lose a couple, ha ha. 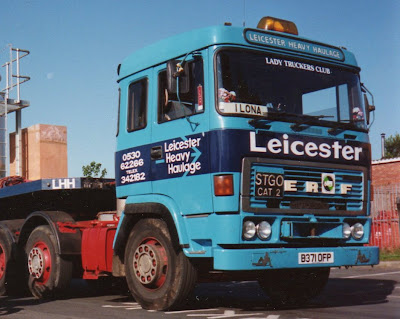