How do you like your sausages, burnt to a crisp?

A little bit of excitement to start the Burton in Bloom village fete today. I didn't have to go far, just to the end of my road, which made the job easy. I used my trolley to move the tables and stock onto the green. When I arrived I found everyone had abandoned the site and taken cover behind cars, buildings, and hedges, the barbeque was blazing merrily away, don't know if anyone had thrown some burgers on it at this stage, ha ha. Apparently there was a gas leak around the top of the bottle, and it was thought best to abandon ship and call the fire brigade. 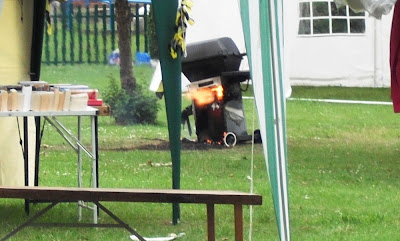 Keeping well back in case of possible explosion. It was roaring like the sound you get from a hot air balloon. I thought any minute now it's going to blast a thousand pieces of hot metal all over the place. 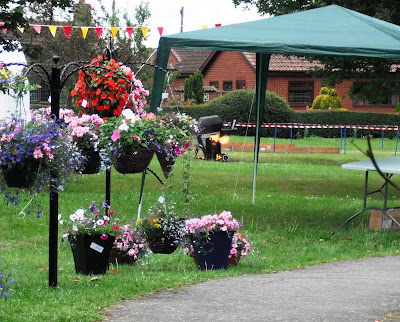 Here they are, hosepipes at the ready, what shall we do now lads? They stood around looking at it. A few sausages would be nice. 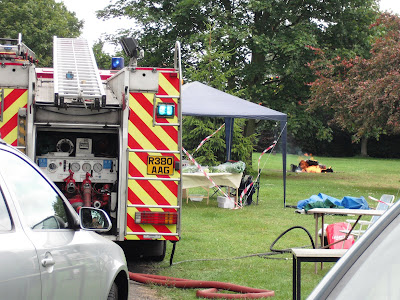 Well I reckon some of those Petunias would look nice in my patio pots, might ring the wife to see if she wants me to bring some back. 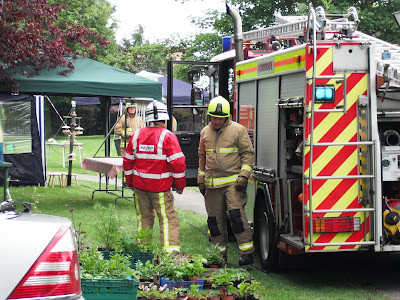 What's it doing now Joe, are them sausages done yet? 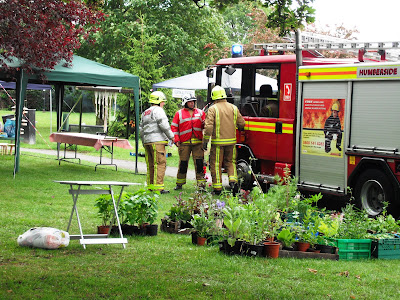 I think we can say goodbye to the sausages, they're burnt to a crisp. 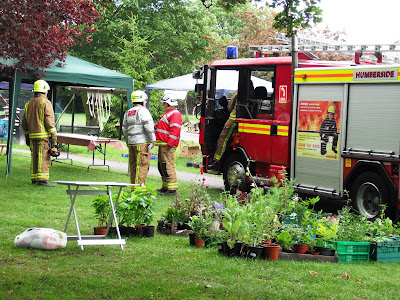 There she goes, she's keeled over, still blazing though. Wonder if we ought to do something? Nah, leave it a bit longer, we might get some overtime in. 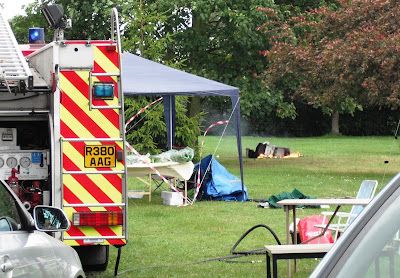 Aye up the backups here, no sweat lads, we'll go over and have a look in a minute. Don't think you'll be needed. 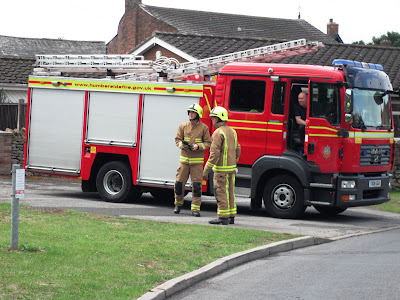 Eventually they put on breathing aparatus and doused it with water. Then they got the thermal imaging camera out just to check, then more water. Then we were allowed back on to the site.

Once we were set up it wasn't long before we had attracted a crowd around our stall. That's Janet on the left looking away, and Sue chatting up the customers. 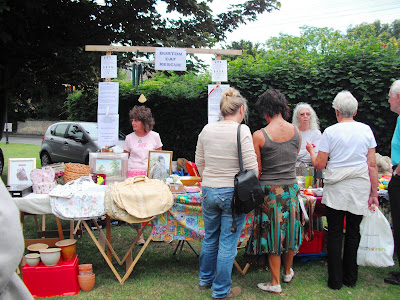 By now they are throwing money at us, we have some great bargains. 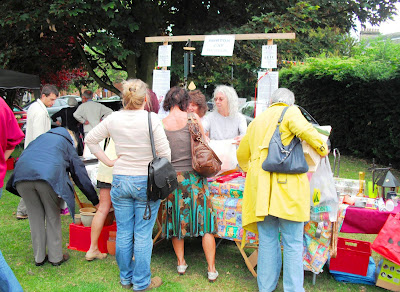 People are gathered around the little ones for the judging of the fancy dress competition. 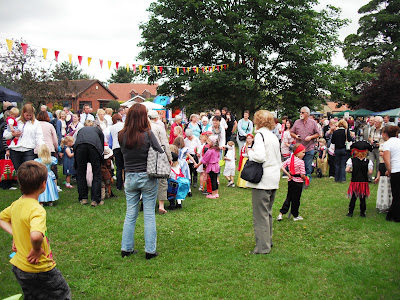 They were so excited, I wonder who has won. 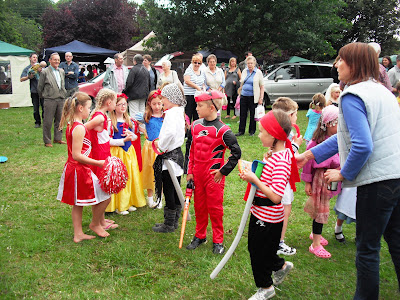 I never did get to find out, but they all got some sweeties. 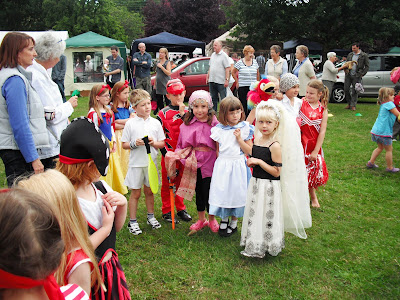 Oh well, that's the end of the barby then :o( 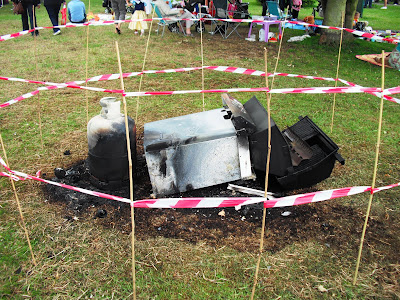 No it isn't we've got another one, ha ha. You can have your burgers after all. 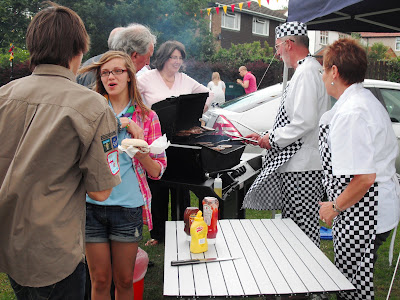 The Teddy Bears Picnic was a great success. 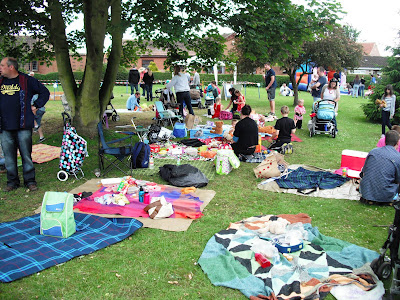 Janet treated us to some scrumptious WI scones. That's Womens Institute for anyone reading this outside the UK. They are well known for their fantastic baking. 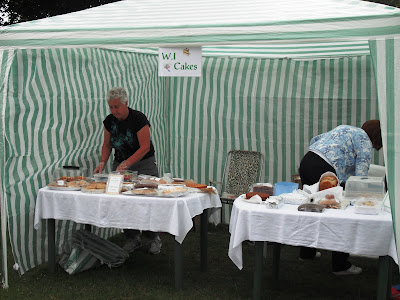 The local history group has a lot of followers here. They always seem to find old photos which have been hidden away for years, then they bring them out and everyone comes to inspect hoping to see some of their ancesters. As you can see, it's heads down, looking for Aunty Maud or Uncle Cyril. 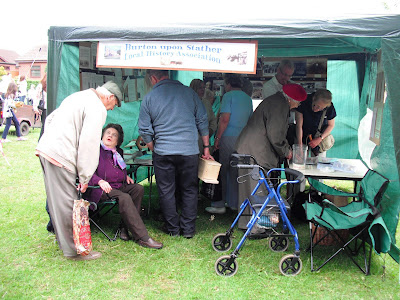 The Allotment Association was busy. We have only had allotments here for about a year, and everyone seems to be doing well with their growing. 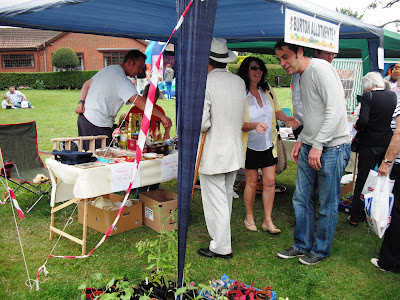 The smallholding from up the road always bring their flowers, don't they look a pretty picture. They always sell a lot. 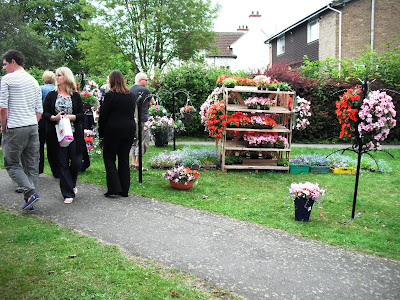 Well that's it for another year. I've just had a phone call from Sue, we have taken the grand total of £109, which we are well chuffed with. All we need to do is find homes for the cats we have, so we can take in some more. Our next fundraising event is next month, when we have a stall at Jerry Green's Dog Rescue open day. Now we need to collect some more stuff to sell.
Posted by Meanqueen at 18:28