It was a miserable start this morning, raining and dull, so I stayed indoors and got on with a bit of sewing. I haven't been very productive just lately, making the most of the sunshine, outdoors in the garden and gallivanting off out and about. I'm making some more bags, because they are easy to do, and I still have some strong fabric left which needs using up.
This afternoon it brightened up a bit so I went a walkabout around the village. We have a very nice caravan site here, and there are often people about that I haven't seen before. I came across two ladies walking their dogs and stopped to chat, they live not far from my home town, that was a coincidence. They asked me about the footpaths, so I was able to tell them where the nice walks are.
What's hapenning with the sunflowers? Here they are, the biggest one is 11inches tall. I have been keeping them indoors at night, if anyone spots them through the front window they will think I am growing illegal substances, ha ha. I take them outside in the sun in the mornings. It was a bit windy one day and they got a bit bendy, so I moved them to a sheltered spot. I am not sure at which point I should stick some canes in for support. 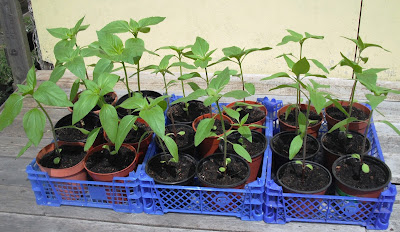 They are in quite big pots but the roots are not showing at the bottom yet. I have nowhere to plant them in the ground, so if they need a sunny spot I will have to put them in bigger pots on the decking against the side of the garage. I'll give them a few more days before I transplant them. 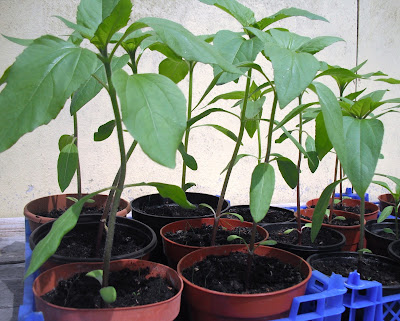 My lunch today was one chopped onion and five sliced mushrooms, cooked in a little oil, with a dollop of garlic puree and a splodge of wholegrain mustard. Added to that was some cream cheese, and just before serving I stired in two teaspoons of plain yogurt. Eaten on a bed of raw spinach. 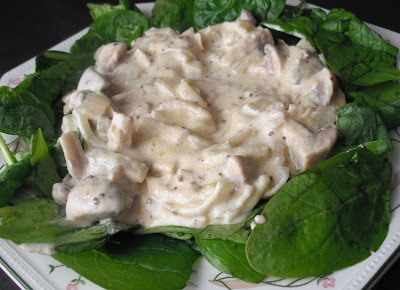 My half yearly water bill has arrived from Anglian Water. I am pleased to say that my water saving has paid off. This bill is £32.66 compared to £38.70 for the same period last year. A saving of £6.04 yippeee. Every little helps. We get two bills, the other one is from Severn Trent Water, and that is for surface water drainage. The cost of that is £29 per half year, so not too bad at all. I will carry on flushing the toilet with the bath water.

Another bill I have recently paid is the quarterly gas and electric combined. There was a slight increase there due to the very cold weather we had earlier in the year. British Gas compare year on year, and include the figures for the same period a year ago. My gas consumption this time went up because I put the central heating on a few times, but my electricity went down. It pays to be careful, and the more they bump up the cost, the more careful I will have to be.

I had a phone call yesterday from Orange, I have my home phone and broadband from them. I am on quite a good package, because I limit my phone calls to off peak times, or should do. Sometimes I sneak in an odd one or two here and there in the daytime, and accept that I will be paying for them. Anyway, they have noticed that my monthly bill has crept up a bit and have offered me another package to include unlimited phone calls whatever time I make them. Of course they will charge me quite a bit more for that, which I thought was too much. The sales lady seemed a bit peeved when I said I didn't want it. She couldn't grasp the idea that if I wanted to keep my bills low, all I had to do was to stop phoning during the day. This is the exact same reason why I will not go onto an all inclusive package on my mobile phone, I prefer PAYG. I don't want to spend hours on the phone, landline or mobile, and I certainly don't want to pay more for the privilege.

Well that's about it, we've had a lot of rain tonight, bucketing it down, I hope it's all gone by tomorrow. If not, more sewing I think. Toodle pip.
Posted by Meanqueen at 21:49