Making sure I have enough money for what I need

It's looking like it might be next week when I go and do a proper shop, I will last over the weekend. I hate shopping on a Saturday or Sunday when the working population and their sproggs invade the supermarket, piling their trolleys high with cases of lager and gigantic bags of crisps. I'd rather not get into the scrum at the checkouts.
So, what have I been eating. This is the mushroom omlette which I had yesterday lunchtime. No frills, no titivation needed, just a big omlette almost as big as the plate, stuffed with lots of mushrooms. Very filling. 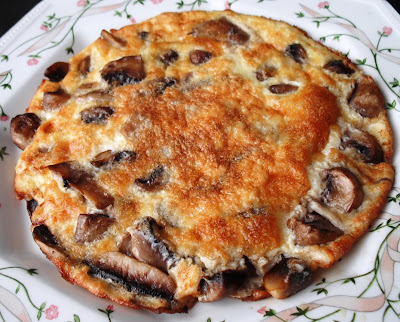 Last night I made this pasta thingy. The middle bit is onions and sweetcorn, with some spices thrown in, turmeric, garlic, a bit of this and that, very tasty. I made two portions and had the rest for my lunch today. By the way, the wholemeal pasta was three bags for £1, from the cash and carry, cheap because it's out of date. 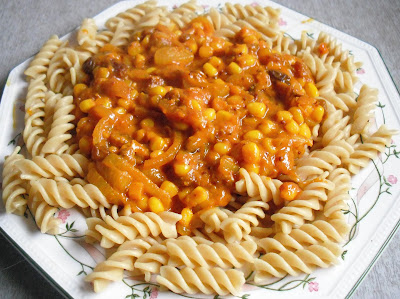 Debbie asked where I get tinned tomatoes from at 25p, and are the chick peas dried or tinned. The toms I get from Home Bargains or B & M, look for offers, four tins for £1. I use tinned chick peas, can't be bothered with the faff of soaking, and I don't like planning ahead. I like to open the cupboard and base a meal on what I see, and I want to be eating it within 15 minutes. The chick peas are also from Home Bargains or B & M. Failing that, you can get these items in Asian stores. If I see a good price I will buy a tray of 12 tins.

I did cheat a little yesterday, bought a few fresh items to top up what I have. I get withdrawal symptoms if I can't have my veg. I found a few reduced items in Asda. Two bags of spinach at 40p each. Half a cucumber at 15p. Punnet of cherries at 37p. Broccoli 60p normal price. Seeded bread at 53p reduced. From Aldi I got 1kg bananas for 68p and a large tub of natural yogurt for 55p. From B & M I got six eggs for 95p. That will keep me going for a while.

Tonight I had steamed potatoes, onions, broccoli, and spinach, topped with a tin of mushy peas. There's a lot of rumbling going on down below, I think it's going to get a bit windy later, ha ha.

It's looking like I might be spending more money next week, I'm having an eye test on Monday and new specs are on the cards. The week after I want to go away for a few days, oh gawd, it's never ending, always something to pay for. I'll be living on porridge for a while to catch up.
Toodle pip
Posted by Meanqueen at 21:14