Couldn't you just fall in love with this view? Monday morning and I'm setting off up into the hills. The weather looks ok, a little overcast, a bit windy, but at least it's dry. Time to explore a few more paths in this beautiful countryside. Todays walk is lots of little short walks, rather than one long one. There was quite a steep climb out of the village, and half way up the hill I looked back and saw Kettlewell below. 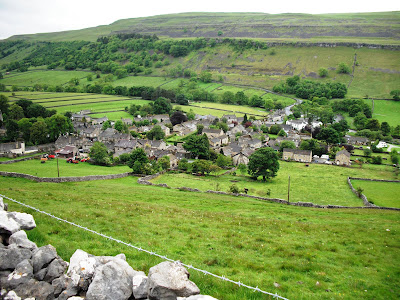 A little bit further up and the sun came out. I love the way the shadows of the clouds drift over the meadows. 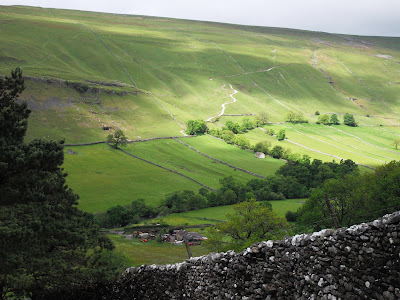 And here we are, even higher up, with views way into the distance. You can see the river down in the bottom. 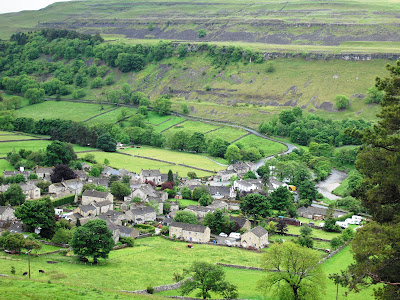 As I climbed higher the weather changed a little, it became more windy and as you can see the clouds were covering the tops. 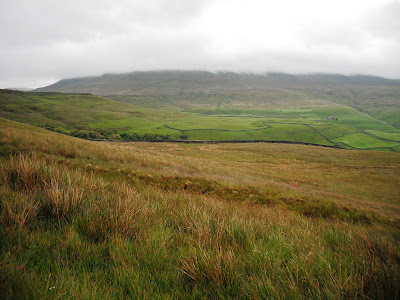 Time to go back down methinks, if I carry on I wont be able to see anything. I don't fancy having my head in the clouds. 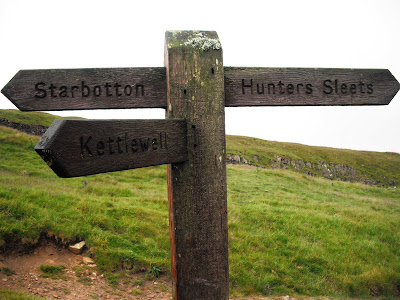 As I came back down into Kettlewell I noticed that there were a flock of sheep in a pen at the farm. Looks like they have been gathered up for shearing. 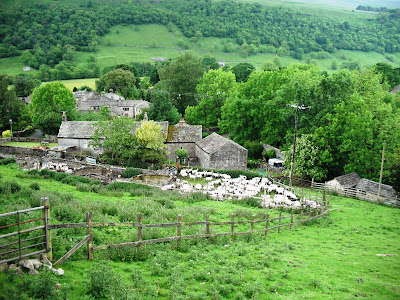 Checking my map, and the position of the clouds I took another route out of the village. After a steep climb I stopped to catch my breath, I could hear men shouting, higher up behind me. I was thrilled to see two men with two dogs bringing another flock down from the hillside. It was just like the TV programme 'One Man and His Dog.' I love watching working dogs, they seem to love their job, and they are so clever. I had a good viewpoint, it was wonderful to watch. What a bonus to see this.
They had to cross the stream at the bottom. If you enlarge the photo's you can see the position of the two dogs. 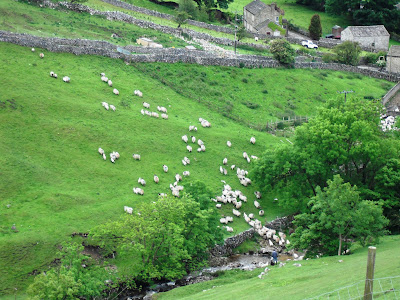 Look how they are gathering them all together. 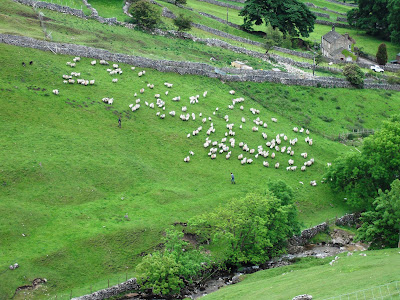 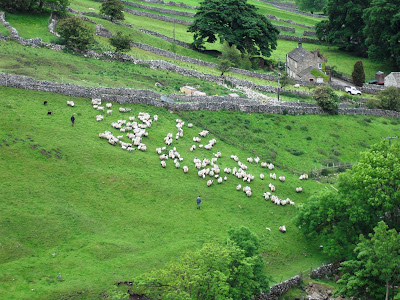 Isn't it an amazing sight, I am so lucky to be here at the right time. 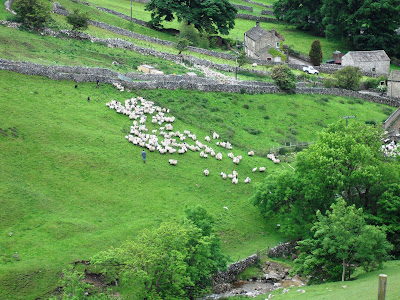 There they go through the gate into the farm. 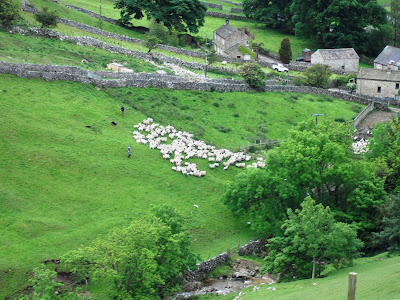 Right, off on my walk once more. Now cows in a field don't usually bother me, but at this time of year there may be calves around, so it's best not to get too close as they can be aggressive. There weren't any calves with this bunch, and I want to enter the field through this gate. But the ground they are standing on is a foot deep in slurry, and I didn't fancy that all over my boots, yuk. So I took another route alongside the wall. 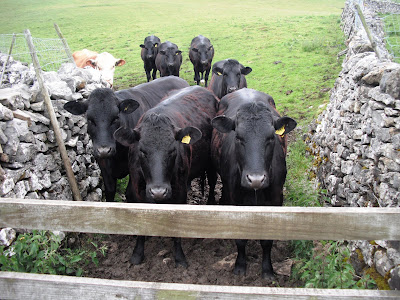 Once again, the higher I went the cloudier and windier it became, so I decided to go back down the way I had come.

And look what I saw, the sheep had been trimmed and were being herded back up again. Back over the stream at the bottom. 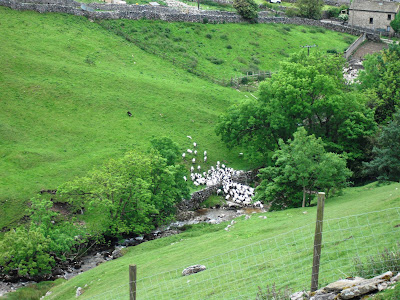 By this time I'm stood on a very conveniently sited wooden bench to get a good view. Here they come. 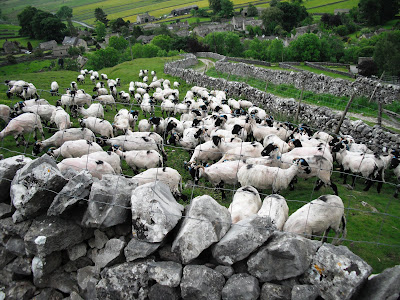 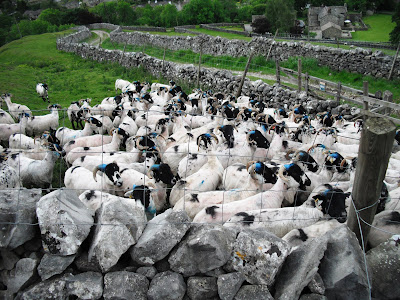 There they go. I feel a bit sorry for them, the wind is getting up and they must feel a bit cold now they are naked. 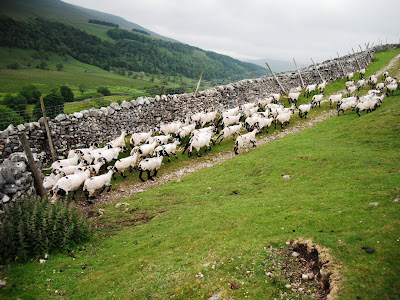 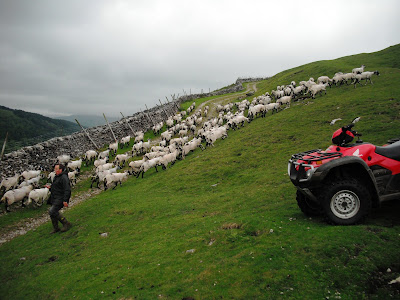 I'm not sure how far they are taking them but it is pretty chilly up there. 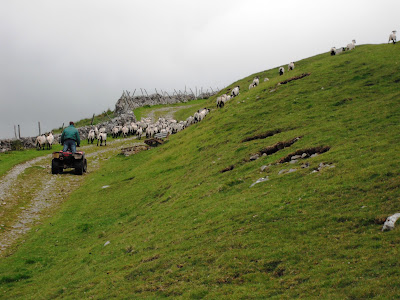 I went back down into the village and set off on a totally different path which would eventually take me to the opposite side of the valley. Here we are on the other side looking down at Starbotton, another lovely little village. The two tracks you can see in the distance are where I was walking earlier. 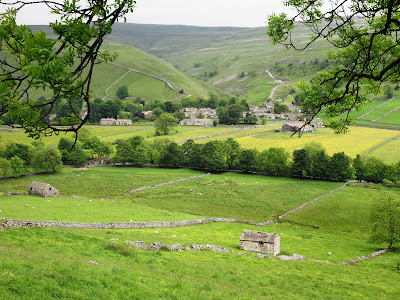 The higher I climbed the better the views. There is still cloud over yonder, but it is sunny where I am sitting on a rock eating my lunch. I love the way the river meanders below. 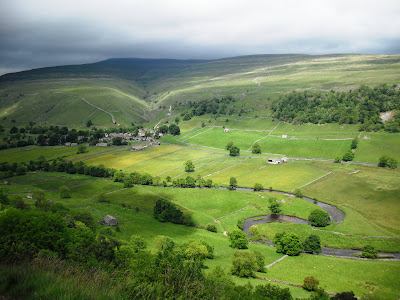 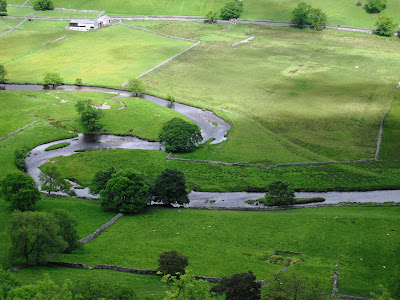 Once again I arrive back at Kettlewell but there is still some time left, so I set off again. I can see a circular walk on the map which will take a couple of hours. The footpath goes over several fields and climbs steadily all the way to Hag Dyke. I had to stop for a few breathers on the way up here. 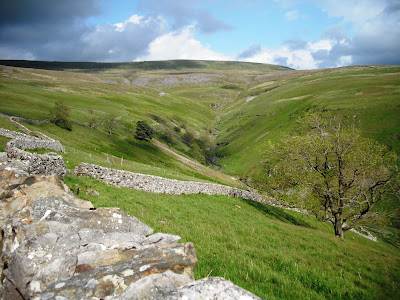 Hag Dyke was originally a farmhouse and it's occupants can be traced back to 1730. In 1959 it was rebuilt as a hostel and is now run by volunteers. The only way to reach it is by walking, or with a 4 x 4 vehicle, as the track is really rough. 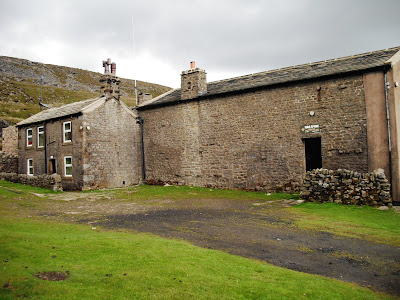 There wasn't a soul about, just me and the sheep. It is very isolated if you want to book a bed you can do through the web site, there is lots of information here.
http://www.hagdyke.com/ 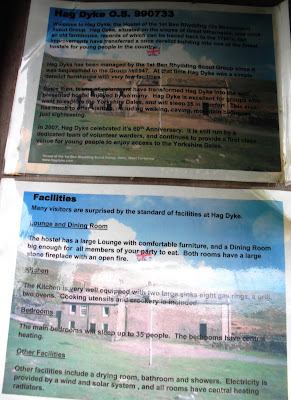 There is a board up at the front, you might be able to read it if you enlarge by clicking on it.
I got back down to my car about 6pm. I had checked out of the hostel in the morning and left it open whether to have an extra night or not. I looked at the map to see where I could do another walk, but I had done most of the paths around the village, so I decided to head home. I was happy with my two days in the Yorkshire Dales, but I will definately be going back there again, I love the place.
Posted by Meanqueen at 14:45