I did something a bit different today, I went on a Ranger led ramble with a group of people. I have done these ocassionally in the past, they are organised by the local council, usually two a month. Sarah is the Ranger, she works at the Waters Edge Visitor Centre at Barton upon Humber, when she isn't rangering she does conservation work around the centre. 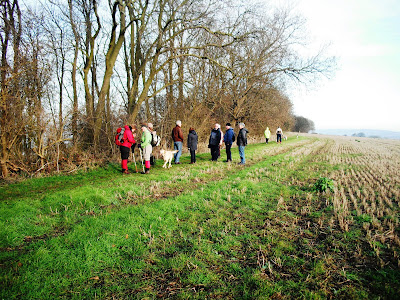 We met at Alkborough, about three miles from where I live. I thought it was daft to drive there so I walked to the start. It was quite frosty but once I got into a fast pace I soon warmed up. It is quite high up along the banks of the Humber and the wind whips across the fields. We met at 10.30am.

When I walk on my own I like to make good progress, stride out and keep moving. It's a different matter with a group, you can only go as fast as the slowest, so not long after we set off I started getting cold and had to put my jacket on. There was a scheduled pub stop for lunch at Winteringham. I took a packed lunch because (a) I didn't want to spend any money, and (b) I don't like to stop for more than 20 minutes, and from past experience I know they take over an hour to eat their meal. I said cheerio to the gang at the pub and walked a few hundred yards further up the street and called in to see my friend Helen. I enjoyed my frugal lunch in a box, wholemeal pasta, lettuce, potato salad, two boiled eggs, and mayo, with a couple of slices of wholegrain bread. I could have stayed there all day in front of her roaring real fire in her cosy living room. I left at 2pm giving me a couple of hours of daylight to get back.

The sun was going down and it was getting quite cold, I quickened my pace, and arrived home just before 4pm. Checking the distance I had walked 14 miles, I think I will sleep well tonight.

I had a phone call tonight from Janet, with the good news that the two kittens have gone to a new home today. The couple in their early forties, originally only wanted one, but once they saw the two sisters together they agreed to take both. Then afterwards we had more phone calls asking about the same kittens. We either get no enquiries at all for a few weeks, then get several all together. By the way, we had a much better day yesterday on the stall, sold quite a lot of stuff, so it was worth going. It will keep them in food for a while.

Thank you Sally and Little Blue Mouse who reminded me of the Steptoe and Son episode where the old man has a bath in a tin bath in the living room. I have found this on Youtube. Albert is eating pickled onions in the bath, but I can't find the one about when he washes his dishes in the bath water. It's a 30 minute programme so you might like to watch the first half of it, the second half is about Harold building a new bathroom. Toodle pip.