I'm struggling with the green tea, it's still horrible. I've got honey in it, a splash of lemon juice, two elderberry juice ice cubes, and some syrup from a tin of peaches, and still it tastes awful. I will gulp it down as fast as I can.

I can hear Bugsy scratching in the litter box downstairs. Any minute now the smell of fresh poo will reach my nostrils and I will have to get up out of my chair and dispose of it. He does pick his moments, still it's better than 3am, the time when Lily decides to do his ablutions. I sometimes wish for a full nights sleep without being disturbed.

What did I do today? It was a nice morning again when Henry choc lab arrived. His owner Helen has a de cluttering job in town. Yes you've guessed right, she goes to people's houses and sorts out their stuff for them, and tries to get them to pass it on to charity shops or dump it, so they end up with a neat and tidy house. Not as easy as it sounds, some of them are rather attached to their clutter. I'd like to do that job, would be good fun to sort through peoples drawers, ha ha.

Anyway, Henry was whimpering to go out, as he does, so we went round to see if Graham and Lady wanted to come for a walk. Graham gave me the thumbs up at the window and was ready in five minutes. Henry loves Lady and Lady loves Henry, aaahhhhhh. We set off down the lane past the playing fields, the new cemetery, and the allotments, across the fields, to Normanby Hall.

This Regency house was built in 1825 in 350 acres of woodland, deer park, gardens, and country park. We are lucky that it is close enough to walk to. This is the back of the house. 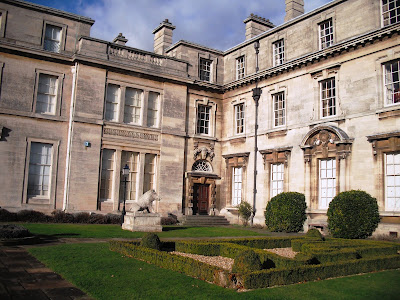 There are lots of peacocks here, I wonder if these two are waiting to get in. 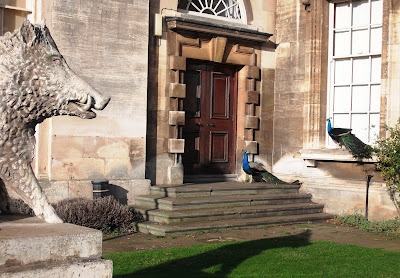 I couldn't persuade them to show us their plumage. 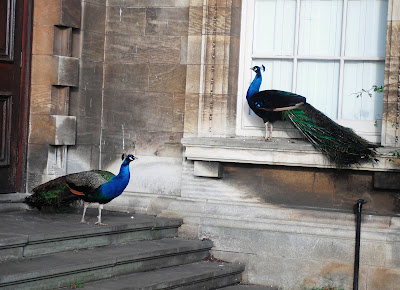 They can sometimes be found wandering around on the road outside the park in Normanby village. 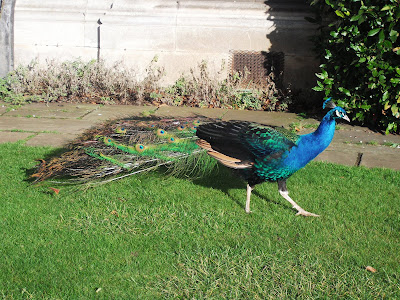 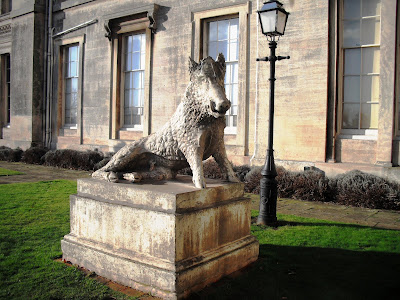 Here is Henry waiting for me to take his photo. He's not very good at posing. 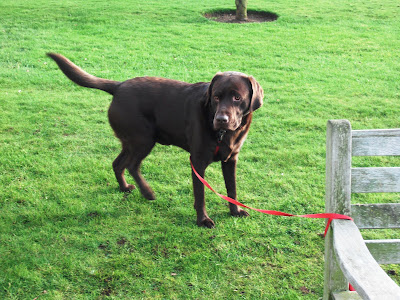 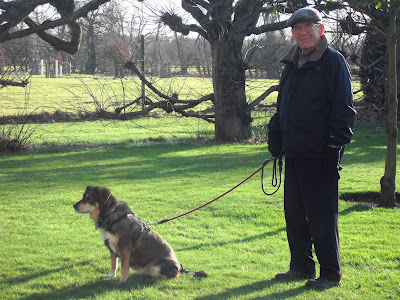 The wind started to get cold on the way back, the two dogs were having great fun chasing about in the fields. I was ready for my lunch at one o clock.

An hour later and Henry was ready to go out again. My goodness, he has loads of energy. This time his companion was Rocky from up the road. He doesn't get out of his garden very much, so I have started to take him out most days when I am here. He stayed with Barry and his dog Scruff for a while, but his owner wanted him back. Shame really, we were rather hoping that she would let him go and live with them permanently. It was not to be, so now I try and bring a little happiness into his life.

Rocky has a habit of jumping onto any bench that we pass, because he knows I will sit down and give him a treat. He is such a cutie. 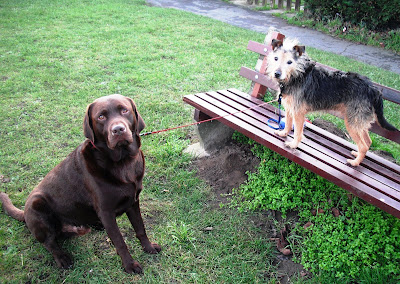 It seems that there is still a problem with posting comments on some blogs. I have been unable to comment on those who have their settings on Embedded. If this is you and you aren't getting as many comments as you normally do, you need to change to Pop Up, or Full Page. If anyone wants to read up on this, click on help, and go to the Blogger Help Forum. There are posts in 'How do I', and 'Something is Broken'
http://www.google.com/support/forum/p/blogger?hl=en
Now why doesn't that link work, ugger, I give up.
Toodle pip.
Posted by Meanqueen at 18:43