A look at the Tor, then off to Bath.

I got up a bit earlier today as I knew I had to pack the tent away, mind you, it comes down a lot quicker than it goes up. The cyclists got of to an early start, I thought they would all be in the kitchen cooking their breakfast, but only one decided he needed something to eat before he left. Three others filled up their water bottles, I can only guess that they are going to stop somewhere for breakfast. I left before the warden showed his face, he must have been having a lie in.
It was a ten minute drive to Kath's house, and she was ready when I got there for the walk up to  the Tor. It was already hot then. Kath parked in the Rural Museum car park and we crossed the road to get the path up. It looks like the Tor is only half way up in this pic, but hills are deceiving. 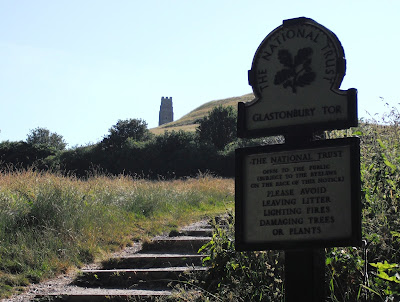 This made us smile, a sign for dog walkers to take note of. If you have forgotten your lead there are some free ones hanging on the fence, no excuse now. Brilliant idea. 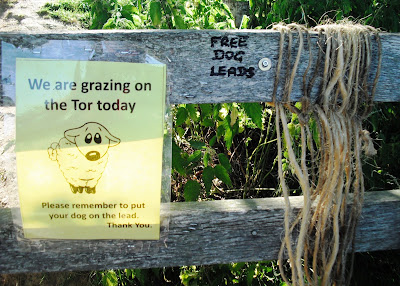 We're starting to get some nice views now. 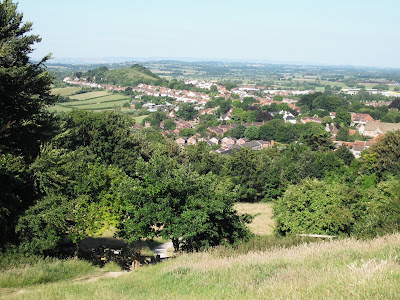 A bit further up. Down below is Glastonbury, and beyond it is Street. 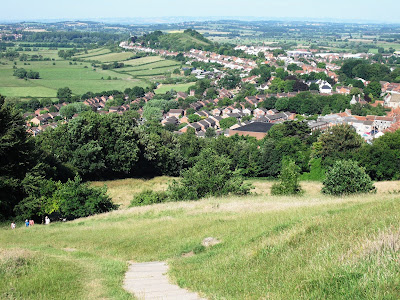 Phew, almost there now. Kath can see her house, and I can almost see the hostel. 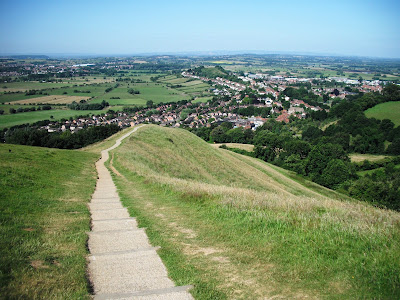 Looking good Kath, I'll race you to the top. 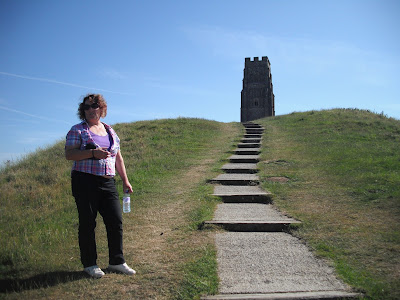 We arrived at the top, and this is the view over the other side. A lone female sits contemplating life. 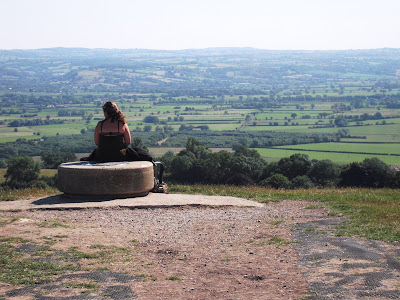 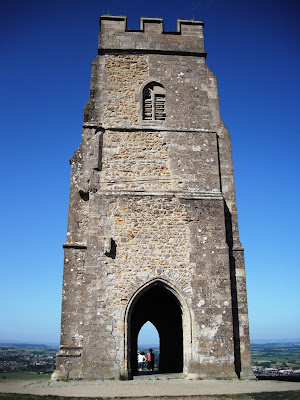 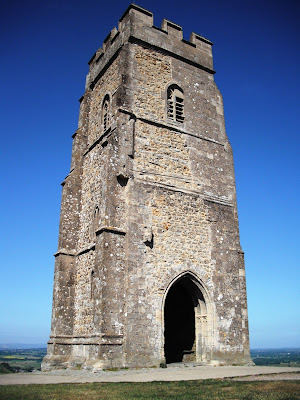 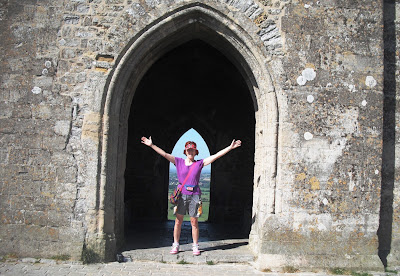 Here is some information about the Tor. I'm being lazy taking a photo of the sign, rather than looking it up on the internet. 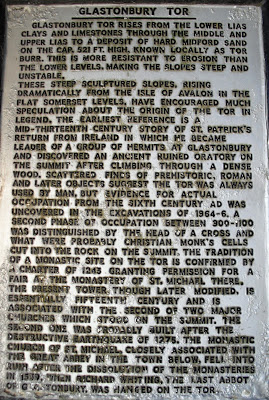 It was lovely and breezey at the top, which I was pleased about because my arms are sore. I will have to slap some more sun cream on them.
We had a look round the Museum of Rural Life, it was lovely, once again Kath's imput made it more interesting for me. She has a wealth of local knowledge. I told her a story about a school desk that I used to sit at, a bit like this one, she said I must tell you the tale. When I was about nine or ten, I sat next to a boy called Ian Foster at school. He lived two doors down from me. All our desks were old and scruffy and the school ordered some new ones, but there wouldn't be enough for every child to have one. They had a competition to decide who would get them. The ones with the most tidy desk would get one. On the day in question I was off school through illness, and Ian tidied my desk for me. He did it so well that we won a new desk. He was lovely, I had a crush on him. 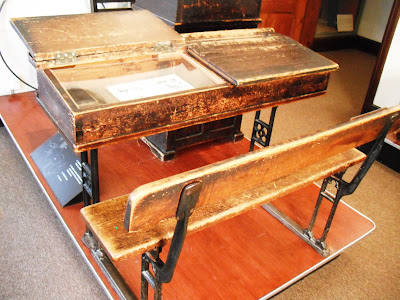 I'm glad we don't have to do the washing with equipment like this any more. It must have been hard work. 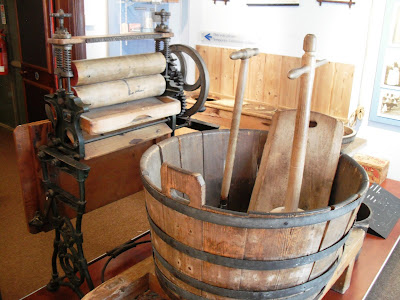 There was an exhibition of woodwork using reclaimed wood, some of it washed up on the beach. I loved this quirky set of shelves. 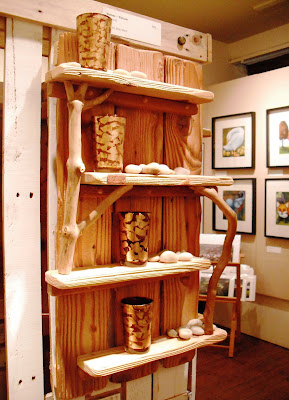 I went back to Kaths house for a final natter, and left about 1.30pm. I did think I might go and have a look at Cheddar, but I decided not to, as I didn't want to get to the hostel in Bath too late. I didn't know where it was and the map I have isn't very good for finding your way in a car. I wanted to avoid driving in the city centre so I went around the outside of it, and hopefully approach it from the right side. I was so hot and bothered that I pulled in at Sainsbury's just to cool down in the store. I needed some bread anyway, and found some reduced seeded bread, and reduced spinach, so I was happy with that. I thought I was going in the wrong direction so I turned left for the city centre, it was going to be guess work from now on. I knew the hostel is on a long steep hill, and I thought I might be near, so I stopped to check. I looked up at my surroundings, and lo and behold I had stopped right outside the entrance. Wow, what a bit of luck. I checked in at 4pm, and went a walk down the hill into town. This church is at the bottom of the hill. 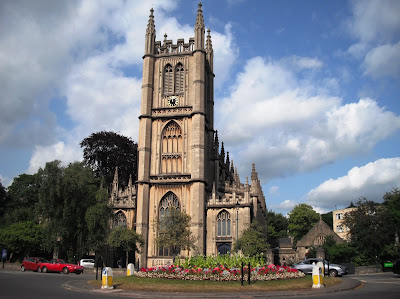 They have open top tour buses like London and Oxford. 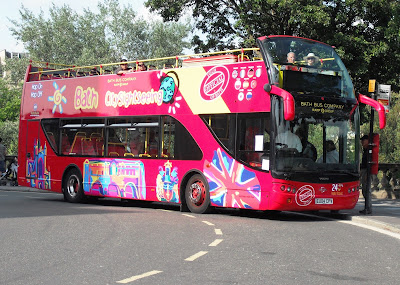 This looks like a nice park next to the river, I fancied having a stroll down there. 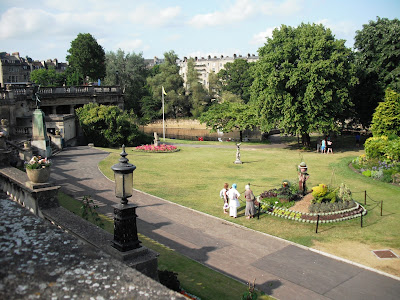 Oh, you have to pay, what a cheek. It's not a lot but I won't pay on principal. Gardens are usually free. 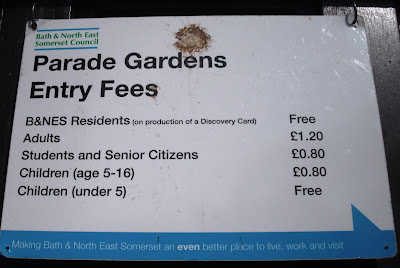 This is the Abbey, which unlike Glastonbury, is free, so I went inside for a few minutes. Next to it is the Roman Baths, now I fancy going to see that and had a look in the entrance. People were queuing to get in. The price for adults up to the age of 65, is £13.25. A bit steep I thought, I will think about that and decided later. 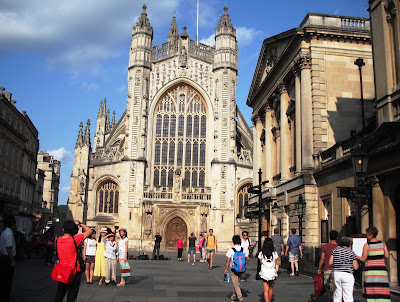 There are lots of houses which all look the same, like this. It reminds me a bit of Oxford. 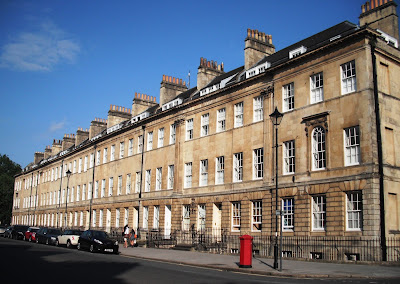 That's all I had time for tonight. I walked back up the hill, but I may get the bus in future as they run every ten minutes or so. I am in a dorm with six beds, I think there are four of us in there. The hostel is an old building, up a driveway, set back off the road,  but quite modern inside. The toilets and showers look newly refurbished. The young lady on the desk was friendly and helpful. There are quite a lot of foreign people here, of all ages. I won't be able to stop up quite so late here, don't want to disturb my room mates. Catch you tomorrow.
Toodle pip.
Posted by Meanqueen at 21:27