Well it had to be done, I've been holding off doing the shopping for as long as I could. The little top ups from Aldi, B & M, Poundstretcher, Asda, and my garden have kept me going. There's only so much rice, pasta, and tins you can eat on a daily basis, then the cravings start for some fresh veg.
I went to Tesco at 7.30pm last night, it's only five miles away so I consider the money I spent on petrol is a good investment when I can come away with this little haul. I struck lucky, they had over ordered on a lot of stock, and there weren't many people there ready to grab it, so I managed to get my share. I came out an hour and a half later with a trolley full. It pays to be vigilant and watch what the assistants are doing with their ticket machines. There was a nice young man marking down the veg and he knows me and what I look for. An Asian woman was in competition with me, she grabbed a couple of items which I would have liked, but she has a kids to feed and I'm pleased they will get some peaches. I beat her to the 25p cauliflower :o)  Swings and roundabouts. 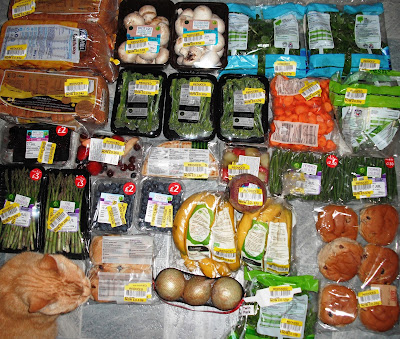 Here is my list of reduced prices. The bread at 34p was due another mark down, but they are always late in that department and I didn't want to wait. Also I took the last three wholemeal loaves, because didn't want to miss out on them. Most of these are 90% off.

My, that looks better. My fridge is all scrubbed out and super clean, it's like a new one. All this will be inspected daily to make sure it is eaten before it goes off. The soft fruit will be the first to go, the swede will be the last. I got some Quorn burgers on offer for the freezer, and bags of frozen peas, sweetcorn, and broad beans. These are handy to have as a standby. The wine by the way was given to me, in exchange for delivering two dogs to the kennels and fetching them back the following day. I will do odd jobs for wine, ha ha. 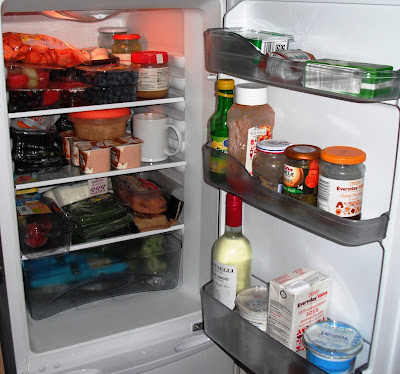 So, let the scoffing begin. I know Tesco get a bad press sometimes, but I reckon they are no worse than any of the other supermarkets for price increases. They are all at it. They don't have to sell this lot at a reduced price, they could give it to the staff or bin it. Because it is about to go out of date it wouldn't be practical to donate it to charity as by the time it is collected and distributed to the people who need it, it would be inedible. Best to let it go cheaply, it has to be eaten quickly. I wouldn't have money to spend on going out, my car, computer and broadband, my cats, and other little treats, if I had to pay full price for everything. I am lucky that I can get to the store to buy it. All that fruit and veg helps me to keep healthy. Thank you Mr T.
This is not a sponsored post, most supermarkets do something similar. I choose Tesco because it is nearest to me. It is up to the individual shopper to stake out their local store, go late to see what's on offer, then base their meals around whatever is cheap. No meal planning here, I eat what is good for me, and cheap.
Toodle pip.
Posted by Meanqueen at 09:50