Hello. We finished the conversion today of spacious detached bunny house, to two luxury hedgehog apartments. This is Helen last week making a start. She is attacking a broken hinge with a screwdriver. It's easiest to work on it while it's laid on it's back. 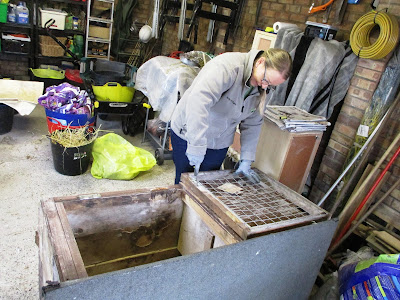 And here it is. The old bedroom door was rotten so we made a new one. The holes in the wire mesh were too big so we added some smaller mesh to the inside. 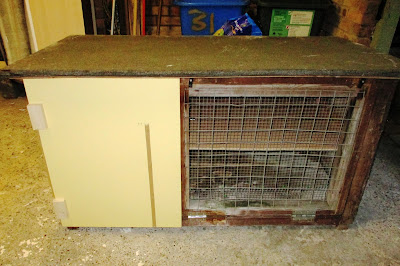 On the left two sleeping compartments. We had to build this from scratch by adding the upper floor, and replacing the rotten divider with two new pieces. There is a gap at the back wall so they can leave their bedrooms to get to the food and water in their recreation area. 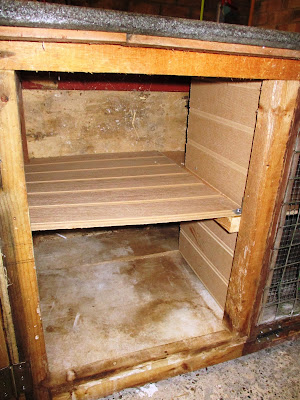 The front of the mesh is hinged at the bottom and folds down. The door to the bedrooms opens to the left hand side. 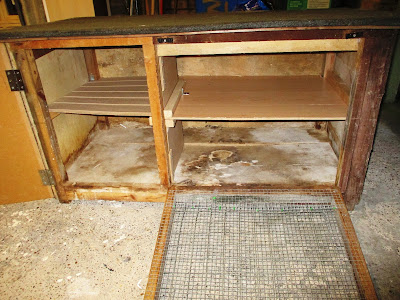 Helen will put some lino down on the floors of both apartments. There will be plenty of hay to keep them warm in bed. This one will be outside so it will be covered in a waterproof sheet to protect it from the weather even though it has a proper felted roof on it. 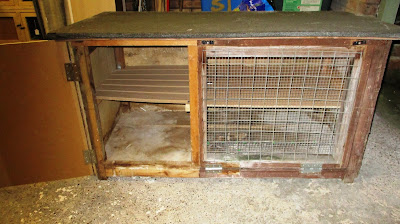 Lucky hoggies having someone to look after them through the winter. They will be released in the spring, the charity has arrangements with special locations to let them go in a safe place. They are released on large acres of land around stately homes, where there is very little traffic so have a good chance of surviving.

Phew, that was hard work, it's surprising how tiring sawing wood and screwing lots of screws into tight places with very little room can be. We had a laugh and did some cursing, and almost gave up, but then we decided we would not be beaten.

It was a microwave home made ready meal for dinner tonight as I couldn't be bothered to cook. Now I am chilling.

DON'T FORGET IT IS CHECKING IN DAY TOMORROW FOR THE WALKING GROUP. Let's see how we are all doing. Thanks for popping in, we'll catch up soon.
Toodle pip
Posted by Meanqueen at 20:46

Email ThisBlogThis!Share to TwitterShare to FacebookShare to Pinterest
Labels: make do and mend, recycle, reuse