Hello. Paul O'Grady is one of my favourite entertainer/presenters. He comes across as a very sincere guy, no airs and graces, just tells it like it is. Funny, down to earth and to the point. Lily Savage was a hoot, my goodness did she make me laugh. I have always been fascinated by blokes in frocks, and Paul played the part of Lily to perfection.
I have read one of his previous books, this one covers the period of when he was starting out on the club circuit as Lily, through to his mainstream television appearances, and the London Palladium. 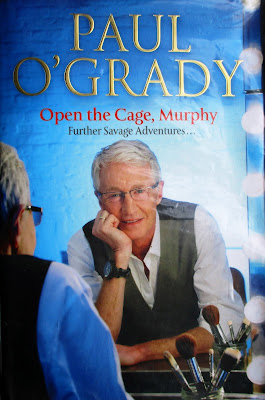 Murphy was his manager/partner, and the story is about the two of them touring the country, then the world, as Paul became more and more famous. There is drama, great sadness, and extreme hilarity in this book, and you can feel the emotions oozing from the pages. He writes as he speaks on television, which feels like he is having a conversation with you. There is lots of name dropping, he must have met most of the famous people in the world. This also give an insight into how the entertainment business works. Even entertainers have their idols.

I must say Paul has worked extremely hard throughout his life, and hasn't been afraid to tackle any opportunities which came his way. Some great photographs in the book, it's good to put faces to names.

If you want an interesting read about one man's journey to the top of the entertainment world then this is the book for you. It's funny and it's sad, and a great read.

Thanks for popping in, we'll catch up soon.
Toodle pip
Posted by Meanqueen at 12:47