The hidden costs of food preparation.

A thought just occurred to me while making my lunch. If your ingredients aren't healthy in the first place, no amount of fafffing about in the kitchen is going to give you a healthy meal. All it does is make more pots to wash, and use more gas or electricity.

I have faffed a little, making a silly face with my salad :o)  Ingredients, salad leaves, cherry tomatoes, grated carrot, coleslaw, and raw mushrooms. Served with a slice of bread and cheese. A big plateful of healthy food and no cooking. 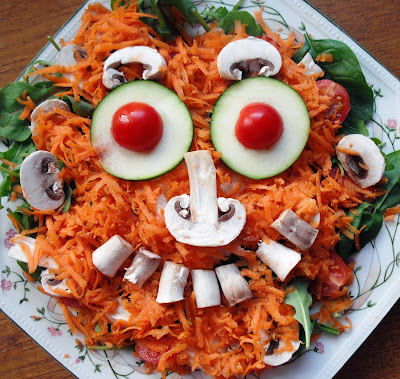 The last of the reduced strawberries, with plain yogurt. By the way, did you know that the basic plain yogurt is 10p more in Aldi than in Tesco. 55p / 45p. 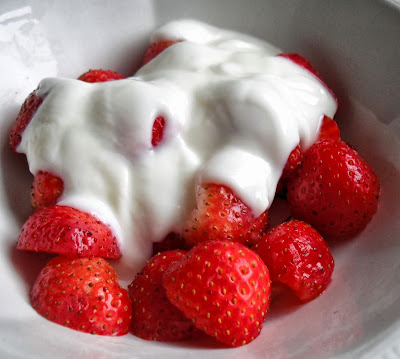 The moral of this story is, making meals with just a plate and a knife cuts down on washing up, saves time in the kitchen, money on heating water and uses less wash up liquid. The non cooking method also reduces your utility bills, saves money on gas and electricity. Also raw food is good for you.
Think about the cost of fuel when you meal plan, think about how long you need to cook some foods for. Boiling food for an hour is something I never do. Using the oven is something I never do. If I make a stew from fresh ingredients I chop the veggies small so it doesn't take very long to cook on a gas ring. It's all very well making a cheap meal but if it needs to be baked, stewed, braised, or roasted, then it might not work out so cheap. Unless of course you are batch cooking and can spread the cost over a weeks worth of meals.
The only thing I make large portions of are soups and stews, and that's only when I have a glut of veggies, maybe bought a pile at a silly reduced price from Tesco, too good a bargain to pass by. If I make a three day stew, more often than not I eat it that same day, and for the next two days. Sometimes I stretch it to four days by adding a tin of beans or tomatoes. I save money by freezing and microwaving the extra portions.
So, put a smile on your face and plan your no cooking meals. To cut down on cost, steam veg rather than boil. Grill rather than bake or roast. Use your microwave or slow cooker rather than your gas or electric cooker. A few pennies saved per meal might not sound very much, but added up over a year it is quite substantial.
Toodle pip.
Posted by Meanqueen at 14:31