Eat your heart out Jamie

I see Jamie has gone and done it again, brought out another cookbook. It's called Save With Jamie, it's about making cheap quick healthy meals, which he says average £1.32 per person. I have to say Jamie, you are wide off the mark with cheapness, you would get a three course, gut busting, slap up meal for that amount if you parked your bum at my table.
How about a platefull of this Jamie. A three day stew, and not a dead animal in sight. Potatoes, runner beans, and courgettes from the garden. A handfull of frozen broad beans, half a tin of baked beans in tomato sauce, a handfull of frozen quorn pieces (special offer), and a packet of sauce mix thrown in. Any old sauce mix will do, one that you have had lying around for ages is fine.  I have made enough for two more big meals, or could have it for lunch, or it freezes well for another time. 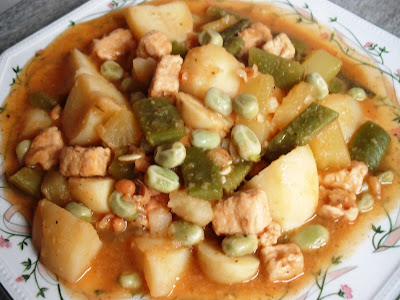 In an interview taken from Yahoo News, Jamie said: "We're not trying to make the cheapest food on the planet, because that's boiling beans and rice, and that's not particularly nice. And I don't think that's where Britain is." What's wrong with boiling beans and rice, Mr Oliver, because that is exactly what a lot of Britains are doing. What do you mean, 'not particularly nice', what a load of old codswallop. Give me a good serving of beans and rice any day rather than your fancy, mucked about, arty farty little pile of food which barely covers half the plate.

My meals are very cheap at the moment because I am using home grown veg, but come to my house in the winter and I will still be serving up dinners for a lot less than your £1.32. Lot's of love, Meanqueen. Your Superscrimper, tight as a ducks arse, pennypinching, cheap and cheerful pensioner.
Toodle pip.
Posted by Meanqueen at 21:44