Good evening from Saltburn by the Sea. Today's walk was 17 miles, a lot of it marching through industrial estates and housing estates. At last I am in the countryside. I said goodbye to Brenda and her family this morning and set off  along the south bank of the River Tees. I'm so pleased that she invited me to stay at her house, her family made me very welcome.
The sun was shining, it was looking like it might be a nice day. I passed several boats moored up for unloading on the opposite bank. 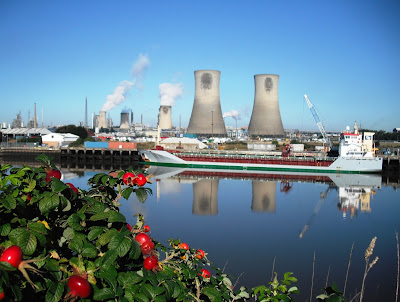 I was following the Teesdale Way foot and cycle path, you never know what you might come across. 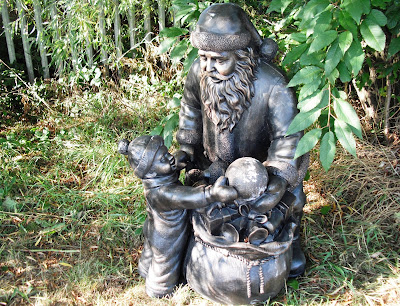 It wasn't long before I got to the Transporter Bridge. There are a lot of portacabins parked in the car park, being used by the contractors for the upgrading and renovation of the bridge. 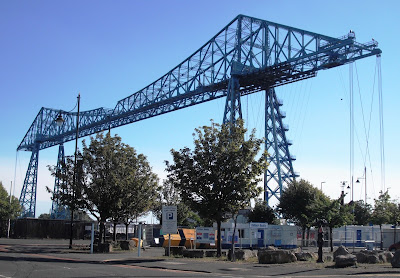 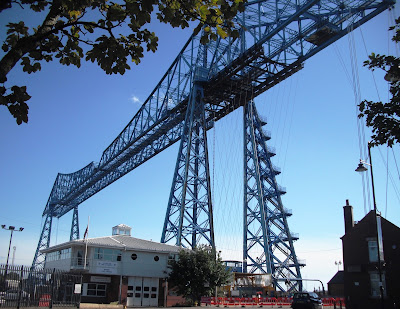 Although it is closed, I was allowed to go through the barriers to get a closer look because no one is working on it today. The security man told me they are adding a lift to one of the support towers so that people who cannot climb the steps will be able to ride in the lift to the top. That yellow platform is where the cars drive onto, and are then transported to the other side suspended from the top of the bridge. 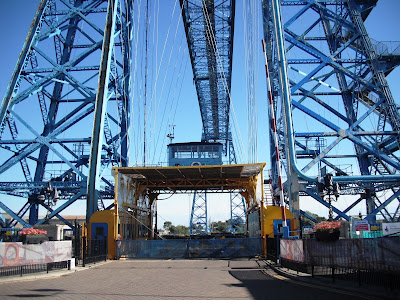 There is a visitor Centre which is a big attraction. The bridge has been in operation for more than a century, and is a grade 2 listed building. It is used for extreme sports like bungee jumping and abseiling. 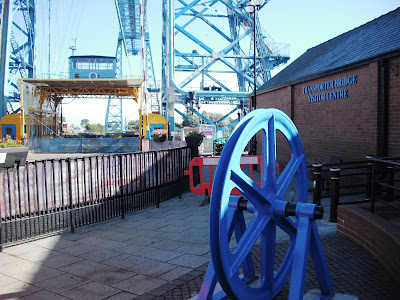 Blimey, I've got 32 miles to walk before I reach Whitby. Best get on with it then. 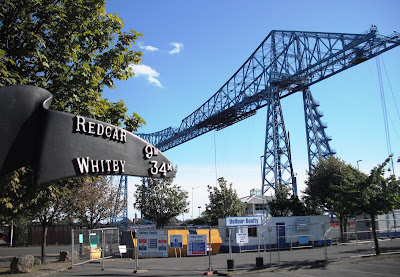 Isn't it a beautiful piece of engineering. So tall, so elegant, so graceful. As I walked away they moved the cradle to the other side. 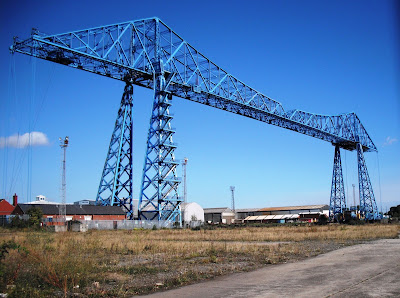 I continued along the south bank. The cycle maps that Martin and Brenda gave me are proving very useful. 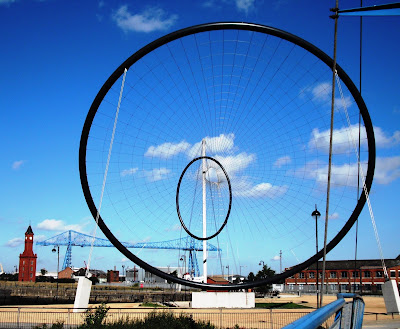 Past the Football Stadium. 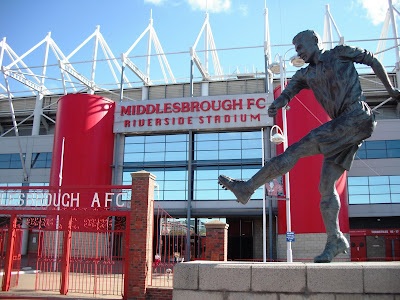 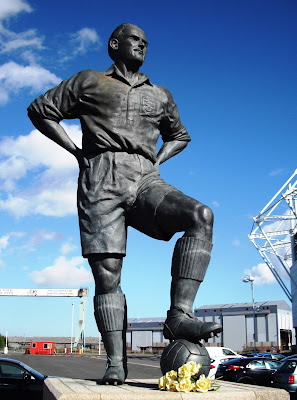 My plan was to follow the Teesdale Way to Redcar, but I came across a section that was blocked off and overgrown. so I decided on plan B, which was to get on the cycle track and go through Grangetown, and Lackenby, then follow the A174 to Marske by the Sea. This building is the Kirkleatham Museum. I didn't go in because I wanted to press on. It's an impressive building. 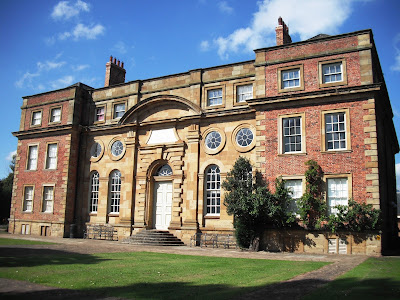 Just across the road are these Almshouses, what a posh place to live. Looks more like a stately home. 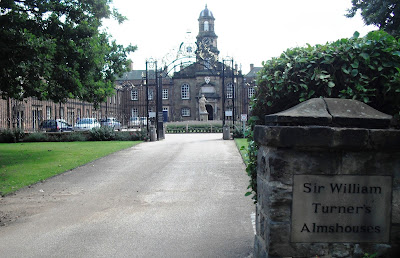 I can't remember what this house is called, it's on the left as you go into the town. 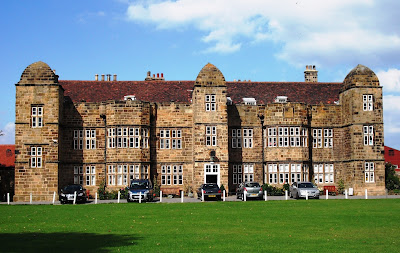 The only part of the this church which is left standing is the tower. It's right on the coast overlooking the sand dunes at Marske. 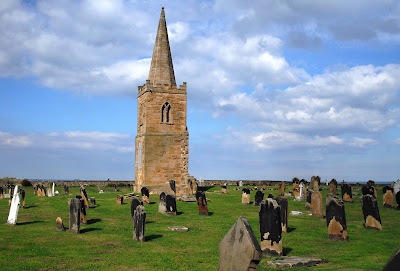 I finally reached the sea front and sat down on a bench to rest for a few minutes. I got chatting to an elderly gent walking his dog, he advised that the easiest and quickest way to get to Saltburn was to walk along the beach, so I did. Approaching the Pier at Saltburn. 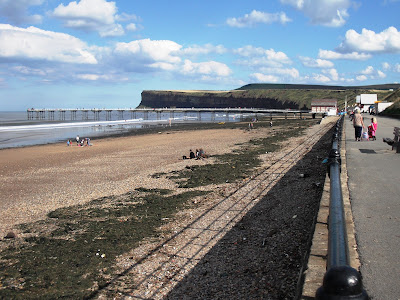 There was loads of people out enjoying the afternoon sun. Lots of dog walkers, swimmers, and surfers, or just walking along the pier. 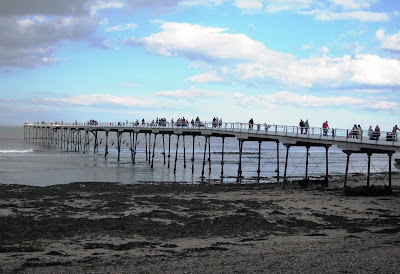 I climbed the steps up to the roadway above. 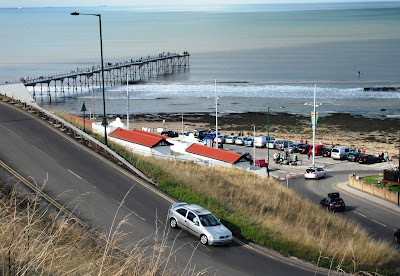 That piece jutting out over there is Saltburn Scar. The Cleveland Way is along the top and I will be setting off along there tomorrow. I've been checking the maps and the time all day today, I would have liked to go on a bit longer a bit  but there is not much chance of finding a bed further on. Best to pack up now. 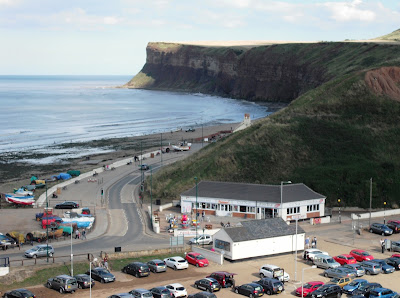 The brass band is very popular on the bandstand. 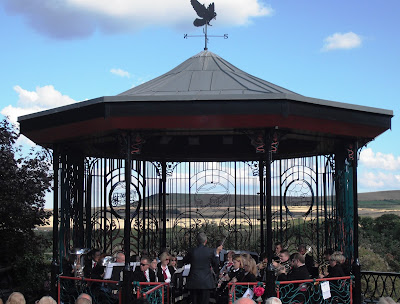 I asked a couple if they knew of where I should look for a B & B. The man was very helpful, he got his phone out and went on the internet to look for me. Several street names were mentioned so I went off to knock on a few doors. Wasn't having much luck, there aren't many places round here. Then I walked down another street and spotted a sign in a window. Bingo, struck lucky, yes they have a room, en suite, price £25 including breakfast. So here I am, watching X Factor on the tele.

I've had a good day, even though some of it was a lot of marching through industrial areas again. Marching helps me to focus on the job in hand, I like the idea of pushing my legs to work harder. Blister count? Nil, these new socks are great. I'm off down the Cleveland Way tomorrow. Although it will be nice scenery, there will be a lot of ups and downs to contend with, I guess it will slow me up a bit. Catch you tomorrow.
Toodle pip.
Posted by Meanqueen at 21:39