Hello. I haven't read such a compelling book as this in a long time. It's taken a while, it's 530 pages long. When I start a book of this size I often can't do the distance, but there is something about Steve Jobs, and the way it was written, which has taken me right to the end. The book was first published in 2011, this is a later one published in 2013. 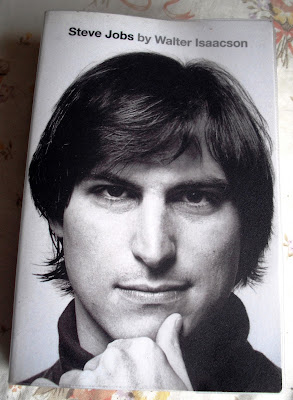 I see there are several books about the life of Steve Jobs, and normally I am a bit sceptical of biographies because I wonder how the author could have known so much about the subject. What prompted me to choose this one was that Walter Isaacson is a renowned and well regarded biographer, and his research over two years included over a hundred interviews with everyone that came into contact with Steve.

I made some notes along the way because I found myself being drawn into the complexity of Steve's personality, and how his mind worked. Any psychiatrist trying to unravel what was going on in his head would have their work cut out. He had a belief that reality could be distorted, he had the ability to manipulate people to do what he wanted. For anyone interested in more reading on Reality Distortion Field.

Steve was very creative, he had vision, he was high energy, but could play the victim when it suited. As a boss he was very scary to work for, firing people at a minutes notice, he could twist things around to suit himself. He could put people down and humiliate them, then later they would be friends. He rubbished ideas, then later claimed them as his own.

Steve built Apple Computers from nothing, he did it by sheer bloody mindedness, and a passion to build the best products. By his mid twenties he was a multimillionaire. He was ousted from Apple, but ten years later found a way to get back in, once again his manipulation techniques got him what he wanted.

The man was a genius, he strove for perfection in all that he did, in his work, what he ate, where he lived, everything had to be just right. There were no compromises. I wonder how much further on computers would be now if he had lived longer. He died on October the 5th 2011. I'm glad I read about his fascinating life.

Thanks for popping in, it's almost the weekend, enjoy. We'll catch up soon.
Toodle pip
Posted by Meanqueen at 13:26