Wot i did yesterday

Hello. I had a trip across town yesterday to pick up flea treatment at the vet. On the way back I called in at Morrisons, a place I don't shop very often. I have noticed that some of the regular things I buy are a bit more expensive there. However, as I was passing the door I thought it might be worth a look for some yellow stickers as it was about 5pm.
I found a few. Would anybody pay £1.92 for 20 blackberries? Not me, but I would pay 20p. Ten on my porridge this morning, and the rest for tomorrow. 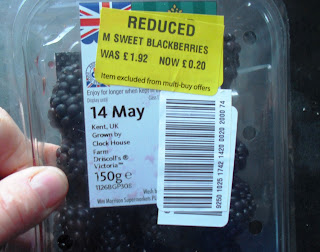 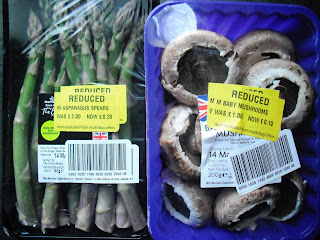 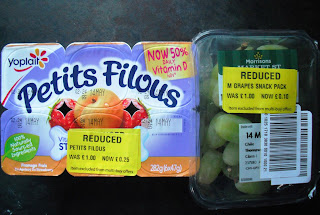 I took my scrap wood to the tip, there was a man on duty who I haven't seen before so I had a chat. I put some plastics in the general waste skip and said oooh, look at this, and held up a pink piece of fabric, it looks like a childs clothes rail cover. I said what a shame to throw this away. He said I could have it. I said what about the cameras, I don't want to get into trouble. He said, they won't be bothered about that, take it, so I did. Isn't it pretty. 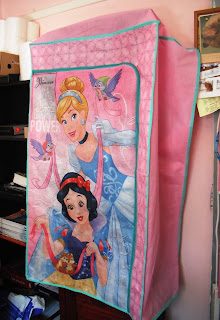 I called in at a little garden centre yesterday as well, not a big fancy one, but a small family business. I have bought a few plants that now need re potting or putting into the beds. So that's the next job to do.

Carol at Crafty Club was asking about the vinyl I sometimes use, have I got any more, and can I get some. I paid a visit to the man who makes covers for market stalls to see if there were any offcuts. He dived in the bin for me and got some out. Not a lot, mainly orange and black, but he said I could go back again for more.

I've been to town this morning a few things I wanted to do. I had a look at the new refurbished library and I must say I didn't like it much. Had to ask where the arts and crafts books were because there are no labels above the shelves. The building has also been taken over by other organisations, community groups and suchlike. The books are now all on one floor where as before it was fiction downstairs and non fiction upstairs. There are lots of small interview rooms on the ground floor, and big open spaces in the library. Not impressed, I filled out the comment form.

Anyway, I'm off outside now to re pot the plants and mow the lawns. Thanks for popping in, we'll catch up soon.
Toodle pip
Posted by Meanqueen at 15:22