A take it easy kind of day.

I had a walk and talk with Helen this morning. She lives in the next village, only ten minutes in the car. I could actually walk there, but she didn't know what time she would be ready, or should I say what time Henry would be ready, Sometimes she gives me a time, then rings up half an hour before and says come now, Henry is pacing the floor ready to go.
This morning we borrowed Guiness and Angus to take with us. Helen pack leader has them trained. Sit down boys, if you want a doggy sweety. The two labs sit waiting patiently, Angus says don't forget little me. 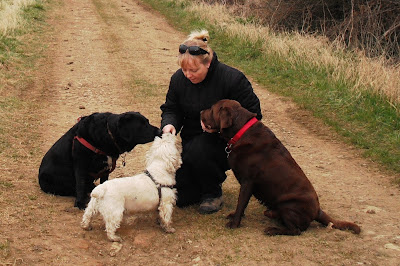 Angus says, if I'm only getting one, I'm off. Smile for the camera boys. 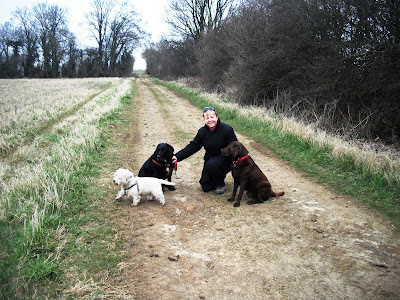 We did just over an hour, they all ran amock in the flooded fields, oh, my what a state they were in. Little Angus's belly and legs were black. Helen has her back seats covered with those proper sheets you can buy to protect them. I call her car the dogmobile. They needed a hose down when we got back. It was good to catch up with Helen, we haven't had a natter for a couple of months. A mug of coffee and a sandwich soon warmed us up back at the house.

This afternoon was taken up with sorting my pots out at the front of the house. Some of the plants needed repotting into bigger pots, and the corner near the front door was full of muck and leaves, so that needed sweeping out. Looks nice and tidy now. It will soon be time to start mowing the lawn, I'm holding off for as long as I can, because once you start you have to keep doing it. I had to come in because it started spitting with rain. I hope it's fine tomorrow because I fancy going out.

It's two weeks since I did a Tesco Shop, I'm going to manage with what I have in, until next week. I have the frozen curried stew I made, I've got plenty of onions and carrots, a couple of ready meals, plenty of tins, rice and pasta, I will be able to knock something up with that. I don't want to buy more food when I already have enough.

Thank you for putting up with the word verification, I know it's a pain. Switching it on and off at random seems to be working though as regards to cutting down the spam, I am getting a lot less. So I will continue with it for the time being. A bit of a nuisance having to keep going into the control box, but it's worth it as it has cut it down by 50%. I'm not sure how the automatic spammers work, but I suspect that if a blog never has word verification activated then it must trigger something off, because the amount of spam grows and grows. But if it is intermitently turned on then a lot will be blocked, and after a while will be diverted elsewhere looking for an easy target. I imagine that the spam comments are initially written by humans, some of them are so rude, I want to tell them to get stuffed. Well I suppose I could do anyway, get stuffed spammers, ha ha.
Toodle pip.
Posted by Meanqueen at 20:57