Repairs in the garden

It's April Fools Day today, has anyone caught you out? Has anyone made a fool out of you? No one has tricked  me today, because I haven't been anywhere. I have spent the day pottering. I thought I had better get some seeds sown or I'm going to miss the boat. I haven't much window sill space to put them on though, I have to keep them clear for the cats.
So here I have got two blue plastic trays, lined with a piece of plastic, so they don't leak mucky water all over the place. I have used plastic cups from the tea machine, collected when I used to go to work over four years ago. Lasting well aren't they. No need to buy pots. I bought the compost last year but didn't use it so I hope it's alright. Well they have two choices, they either grow or they don't grow, ha ha. There's runner beans, broad beans, dwarf beans, courgettes, tomatoes, and cucumber. It's a start, maybe I'll sow a few seeds straight into the beds as well, when it warms up. 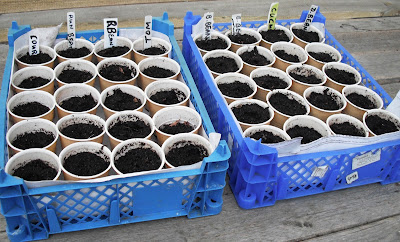 The plastic around the bottom of the greenhouse is disintegrating and needs a repair. I have four sturdy long pallets standing on edge around the base. 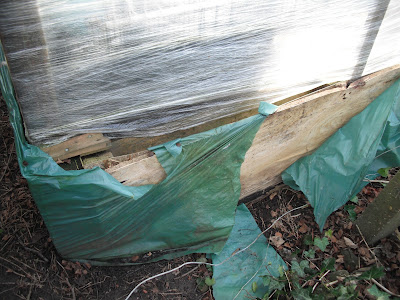 Luckily I have some of that gazebo roof left, that I got out of a skip. Remember that? I used the blue panels to make ten shopping bags but the white sections were too dirty to use for bags. It has come in handy for other jobs around the garden, like lining the seed trays above, putting a back on the wooden shelving up against the garage, and now repairing the bottom of the greenhouse. That will give it another years service. 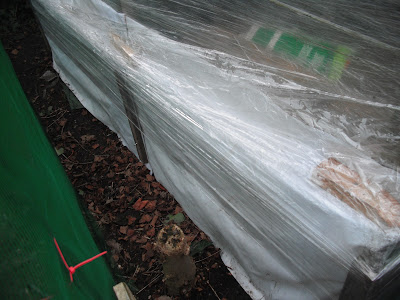 My next door neighbour has removed his garage, and now there is nothing between his garden and mine. My compost heap sits between the garage and greenhouse, I have a board up across the back to contain the compost. The original concrete posts are still there, all they did was to string some wire across when they built the houses. I think it might be my responsibility to put something there as it's on the left hand side of the garden. As I don't want to spend loads on a new fence, and don't want to grow a hedge between us, it's going to have to be something simple and cheap. 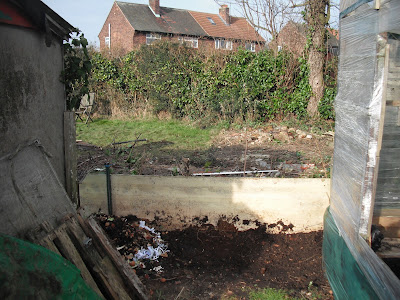 About a year ago my friend gave me a roll of this green stuff. I don't know what it's for but it is pretty strong. I utilised some old bits of metal from a broken gazebo which I had, and hammered the posts into the ground, then fastened the green stuff on with cable ties. 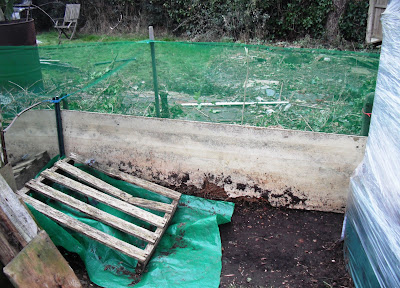 Looks alright dunnit. It will do for now. I'll wait and see if my neighbour erects anything on his side. 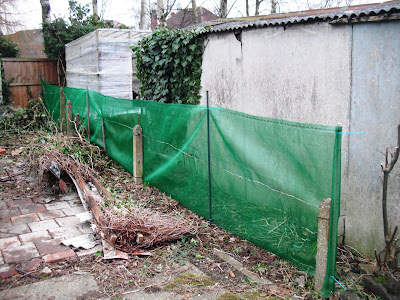 I've spent a lot of time on the new artyfarty project today. I must say, it's coming along a treat. I think it's going to be the best one yet, better than the others. It might be finished tomorrow, but then again it might not, ha ha. There's just one more thing I need to add before the final inspection. I won't unveil it until I am 100% happy with it.
Toodle pip.
Posted by Meanqueen at 20:40