Hello, I'm a bit late with this tonight, as I was late finding a bed. I can't tell you how far I've walked today, bikehike is playing up, but it's a flippin long way. I got to Buxton mid afternoon, far too early to stop, so I carried on, in the hope I would make it to Bakewell. A bit of a long shot, but I had to try, as there are hardly any places in between that have a B & B. I didn't reach Bakewell, but found a small hotel at Monsal Head.
I noticed that Anon left a comment asking why I didn't do the research on the internet first, to find cheap accommodation. The answer is that I don't know how far I am going to walk each day. I don't know what time I am going to set off each morning, I don't know how many hills I'm going to climb which slows me up. I don't know how long my feet are going to hold out. I don't know if I'm going to get lost and lose time finding the way. I don't know how long I'm going to walk for each day. I don't want to prebook and then have to walk to a timetable. The idea is to have complete freedom in where I go, and which route I'm going to take. Besides all that, the reason I am frugal in my day to day living, is to give me money to do trips like this.
So, this morning I set off from Macclesfield just after 9am. I am heading for Buxton, but I am not going to turn right here, I'm going to follow the B5470, and turn off on a narrow road called Cliff Lane. 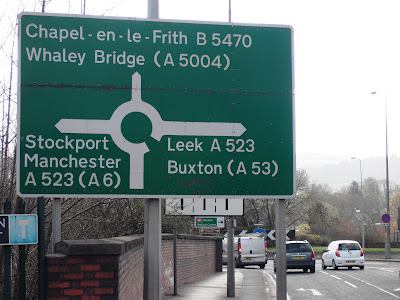 I passed a small holding, they had hens, ducks, and goats. 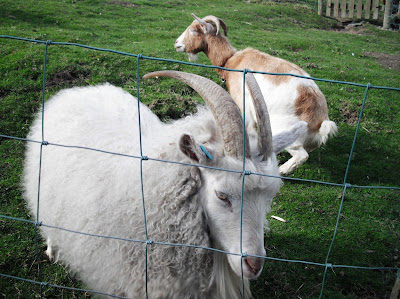 This was an unusual gate, the artist calls it an artwork, it certainly looked arty. It wasn't an entrance to anything, just a small patch of grass. Nearby was a plaque with the artists details on it, if anyone passing would like to buy one they can contact him. A novel way of advertising his wares. 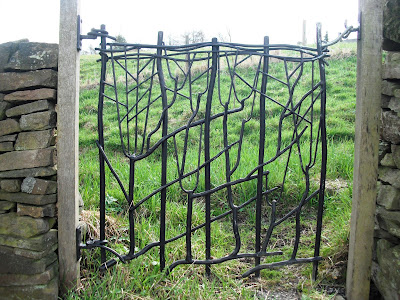 Jam and chutney for sale here, all proceeds to go to keeping the walled garden tidy. Put your money in the honesty box, and don't steal anything. 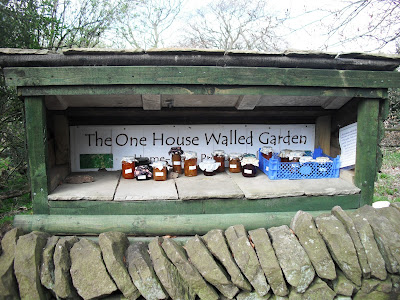 I've climbed a bit further out now, looking back over Macclesfield. 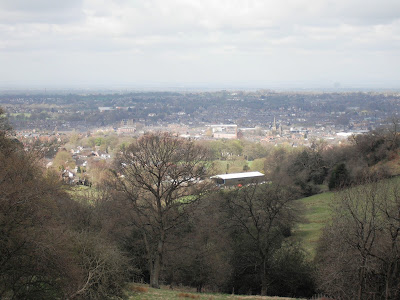 The track on the right has been badly eroded over many years, lots of loose stones makes it very difficult to walk comfortably. They are building a new track alongside it and have cut down a lot of trees on the edge of the forest, and put some fencing up. The ground is much softer there. 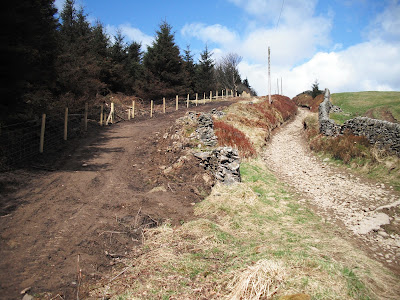 Yes it's been a sunny day, and yes I've had my shorts on all day. This is the A6, close to the Cat and Fiddle pub. 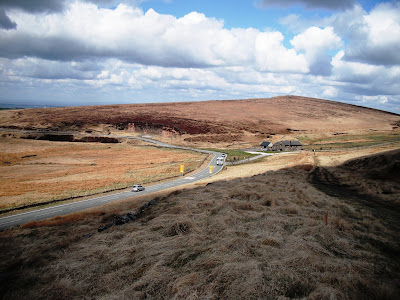 And this is the Cat and Fiddle, a famous landmark in Derbyshire. 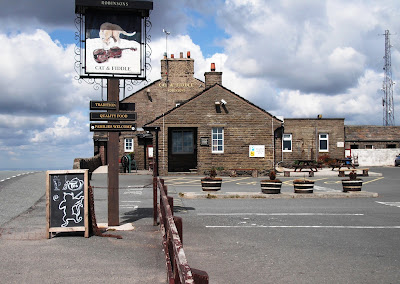 Just as I was coming into Buxton, I saw some red lambs, down there in the distance. I don't know if they had jackets on or the farmer has painted them red. I have heard that farmers are resorting to painting their stock bright colours due the the increase of rustling. 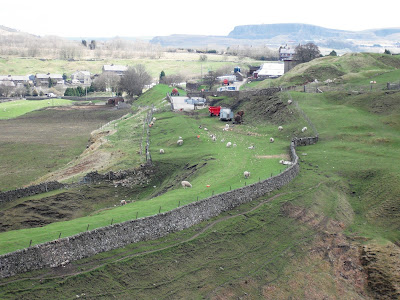 This is Buxton Pavilion. I called in here, to ask at Tourist Information if they could find me some accommodation half way between there and Bakewell, they couldn't. That's why I carried on walking, it was too early to pack up, and besides, I know from past experience that it is very costly to stay in Buxton. 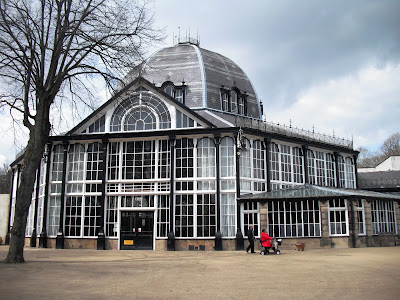 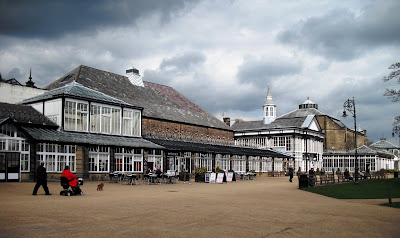 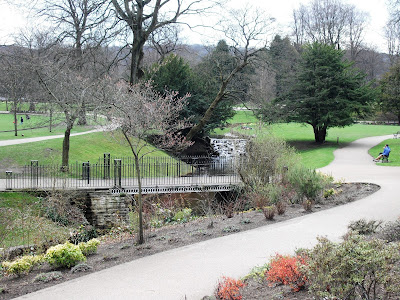 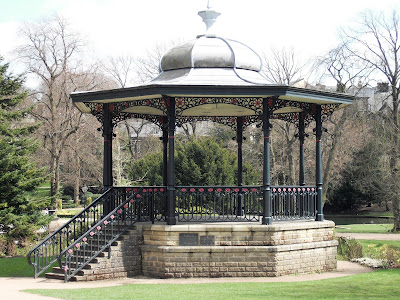 So, out of Buxton on the A515, I did a left turn to get onto the Gritstone Way to Cowdale. I went underneath the right hand arch of this viaduct. 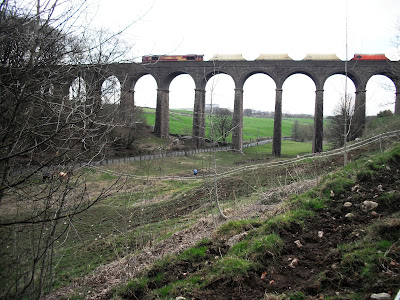 I picked up the route that I previously used in September, a bit boring but I didn't have time to get lost. I slogged it along the Monsal Trail, my little legs going faster and faster as I tried my hardest to get to Bakewell. It got to 7pm and I knew I was beat, and came off the trail at Cressbrook, to take the road, just in case I came across a B & B sign anywhere. I took this pic as I came into Cresswell. 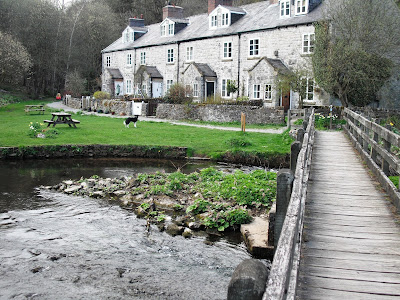 I rang Tracey, a lady I know from Walking Forum. She suggested Monsal Head pub, or a small hotel opposite. It was a steep climb up to the top of the Head, I should have stayed on the Trail a bit longer, then I wouldn't have had to do that climb. Here is the view, the Trail goes over the viaduct. The light wasn't very good as the sun had gone down at this point. I will take another one tomorrow morning. 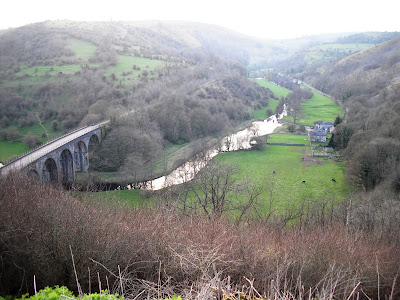 I was glad to get this room tonight, my feet are a bit sore, and I've had to put some padding underneath my shoulder straps to stop the rucksack digging in. The two blisters on my left foot are almost gone, only to be replaced by two more on my right foot. Breakfast is at 8.30, so I'll be off about 9,30. When I get to Bakewell that will be where I stopped last time, so it will be unknown territory from then on, so who knows where I will be tomorrow night.
Toodle pip.
Posted by Meanqueen at 22:15