Hello. I've just read something that has brought me to tears. I don't cry very often because I have nothing to cry about, but occasionally something tugs at the old heart strings and opens the floodgates. An article in the Daily Mail, yes goddamn awful newspaper I know, I still read it though. If it was a paper version it would only be fit for tearing up into squares, and hanging it in the lavatory, but once in a while there is a heartwarming story which shines out from among all the doom and gloom, and banal celebrity claptrap gossip.

The headline that caught my eye was, 'Desperate Grandfather has one stone tumour that measured twice the size of his head removed, after walking for three days to seek help'.  When he was in his 20's a swelling on Sambany's left cheek began to grow. After hearing that the charity Mercy Ships had docked in Madagascar he walked for three days then took a four hour car journey to seek help. The volunteer crew performed the life changing operation, removing the biggest tumour they have ever seen. Hey, look at him now, such an amazing transformation. 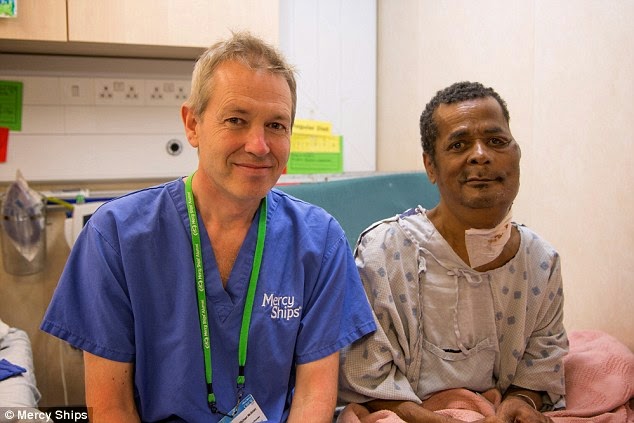 Photographs from the Daily Mail
I've never heard of Mercy Ships before. Here's a little bit from the web site.

In 1978, a team led by Don and Deyon Stephens began the process of finding a suitable vessel to fulfil their dream of a hospital ship that would reach out to the world's poorest people. On July 7th 1978, this dream became a reality. The first Mercy Ship, a retired ocean liner called Victoria, was purchased for £600,000.

Since then, various ships in the Mercy Ships fleet have served in more than 150 ports in developing nations around the world, bringing lasting change to hundred of thousands of lives. From the beginning, Don Stephens has served as Founder and CEO of Mercy Ships. Deyon, a registered nurse, serves as the Director of Training and oversees the Ships Watchmen programme.

Mercy Ships is an international faith-based organisation with a mission to increase access to health care throughout the world.

Mercy Ships uses hospital ships to transform individuals and serve nations, one at a time. Through the deployment of the world’s largest charity hospital ship, the Africa Mercy, Mercy Ships works with host nations to help fill the gaps in health care systems, while serving the immediate needs of their population.
Now isn't that amazing. Everyone who works on board is a volunteer. They all have to pay for their own transportation to and from the ship, and they pay for their own board and lodgings while volunteering. The ship, Africa Mercy,  is currently docked in Madagascar.

Isn't it wonderful that these kind hearted people do this work. And more wonderful that people in far off countries can get the help they so desperately need. If you want to read the newspaper article click on this link.  It has a short video about the work of the charity.

The link to the Mercy Ships web site also. I've had a good look round the site. There is a page about how to help, there are lots of different ways. I make my charitable donations as and when I can afford it. I send a cheque in the post because I don't like paying online and putting my card details into a computer. I put a note in with it to say I don't want a receipt, and not to put me on any mailing lists. I haven't made a donation since September, so I can afford to send Mercy Ships one now. If you would like to do the same, that would be very nice. If you already have your chosen charities that's great, carry on supporting those, and thank you for reading this blog post.
Lots of love, xxx Ilona
Posted by Meanqueen at 20:56

Email ThisBlogThis!Share to TwitterShare to FacebookShare to Pinterest
Labels: charity