Hello. This post is rather pic heavy. I've had a lovely afternoon out at Castle Howard in North Yorkshire. The day started sunny so I thought I had better not miss the opportunity to go out. It's about 60 miles each way, over the Humber Bridge, towards Beverley, then on to the B1248 through Bainton, Wetwang, Norton and Malton. It's very well signposted as you can imagine for such a famous building.
Castle Howard has been a family house for over 300 years. It sits in a 10,000 acre estate, and has a reputation as one of England's most magnificent houses. The house is not open during the winter, but that was ok with me, I just wanted to enjoy a walk around the gardens and estate. There is a £5 charge, which I don't mind paying as I wanted to park close to the house. A map was included in the price.
The sun being quite low meant a lot of shadows, the best side was the back of the house. 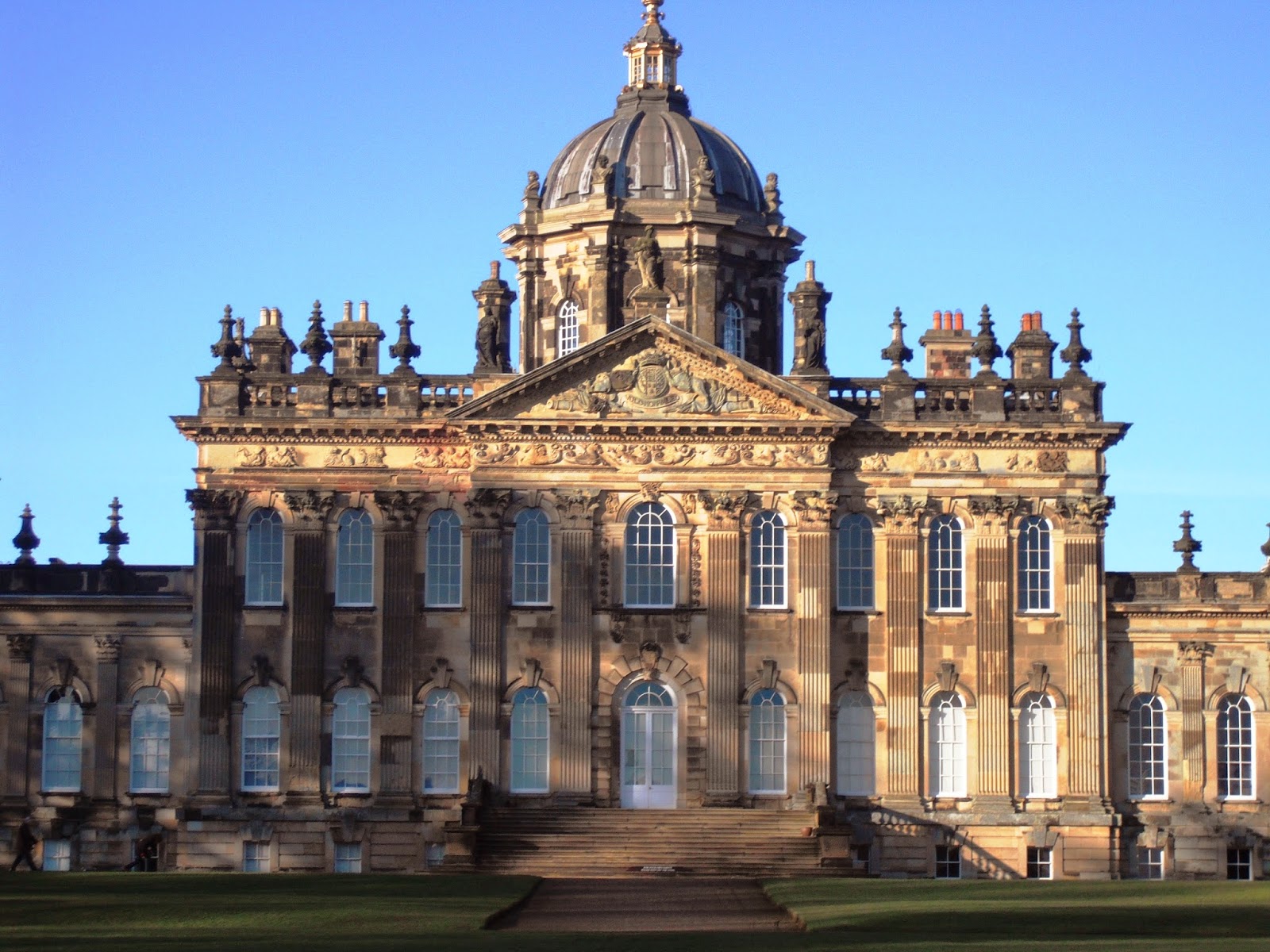 Of course the little fella came too. Some of the paths were hard going and at times it was easier for me to push him on the grass. 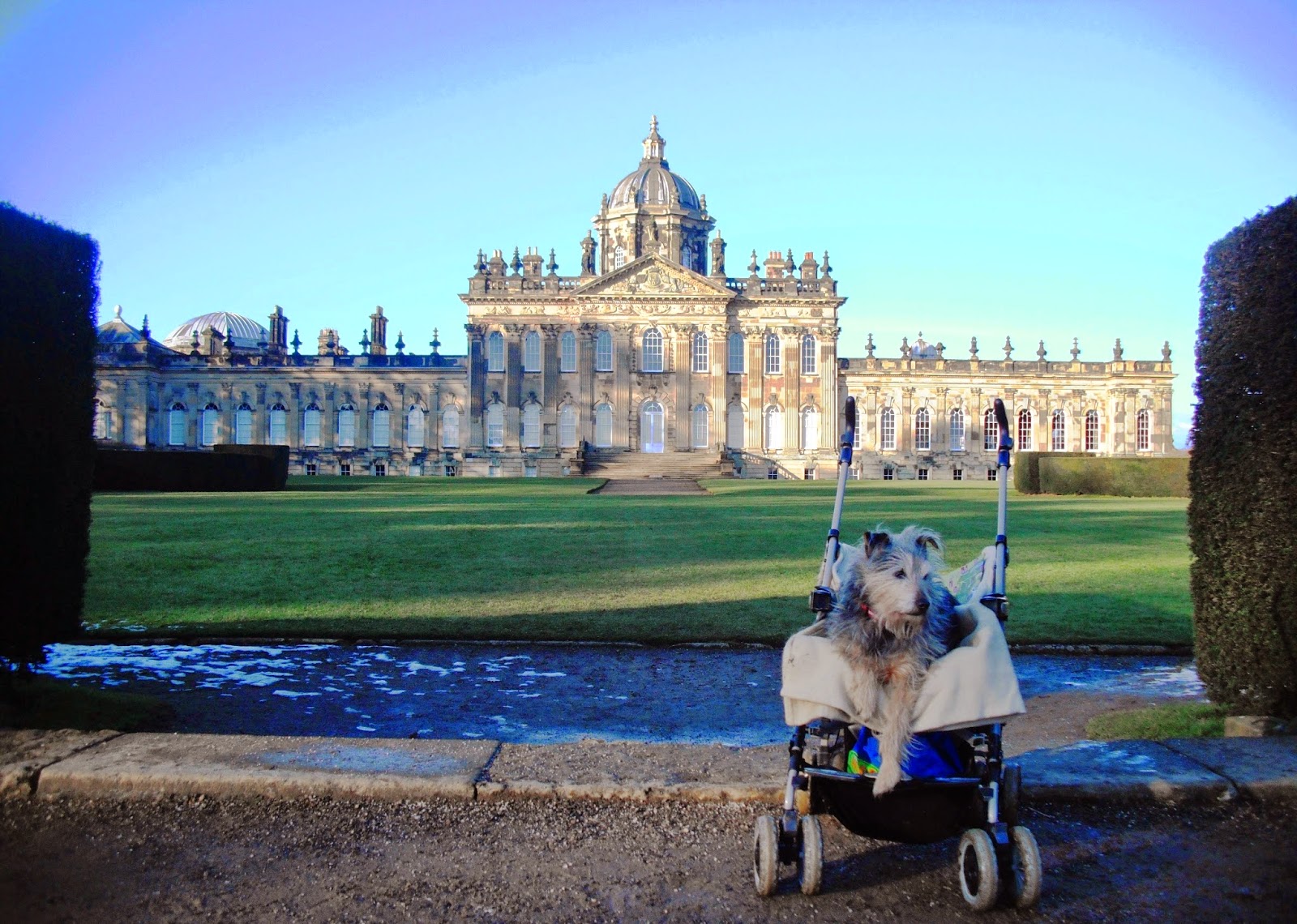 Pity about the shadows. 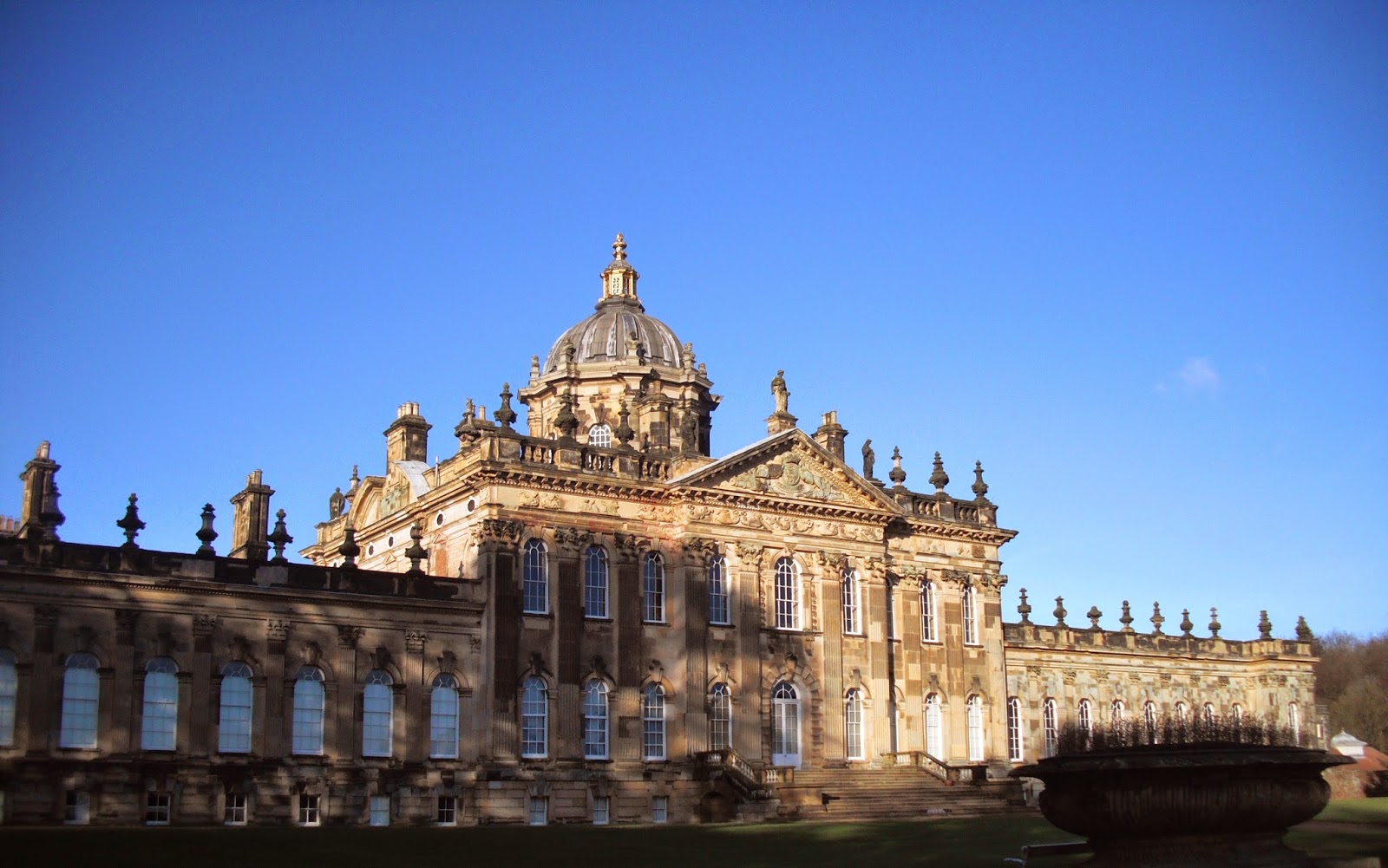 This is the Atlas Fountain. Not working today, the water is frozen. 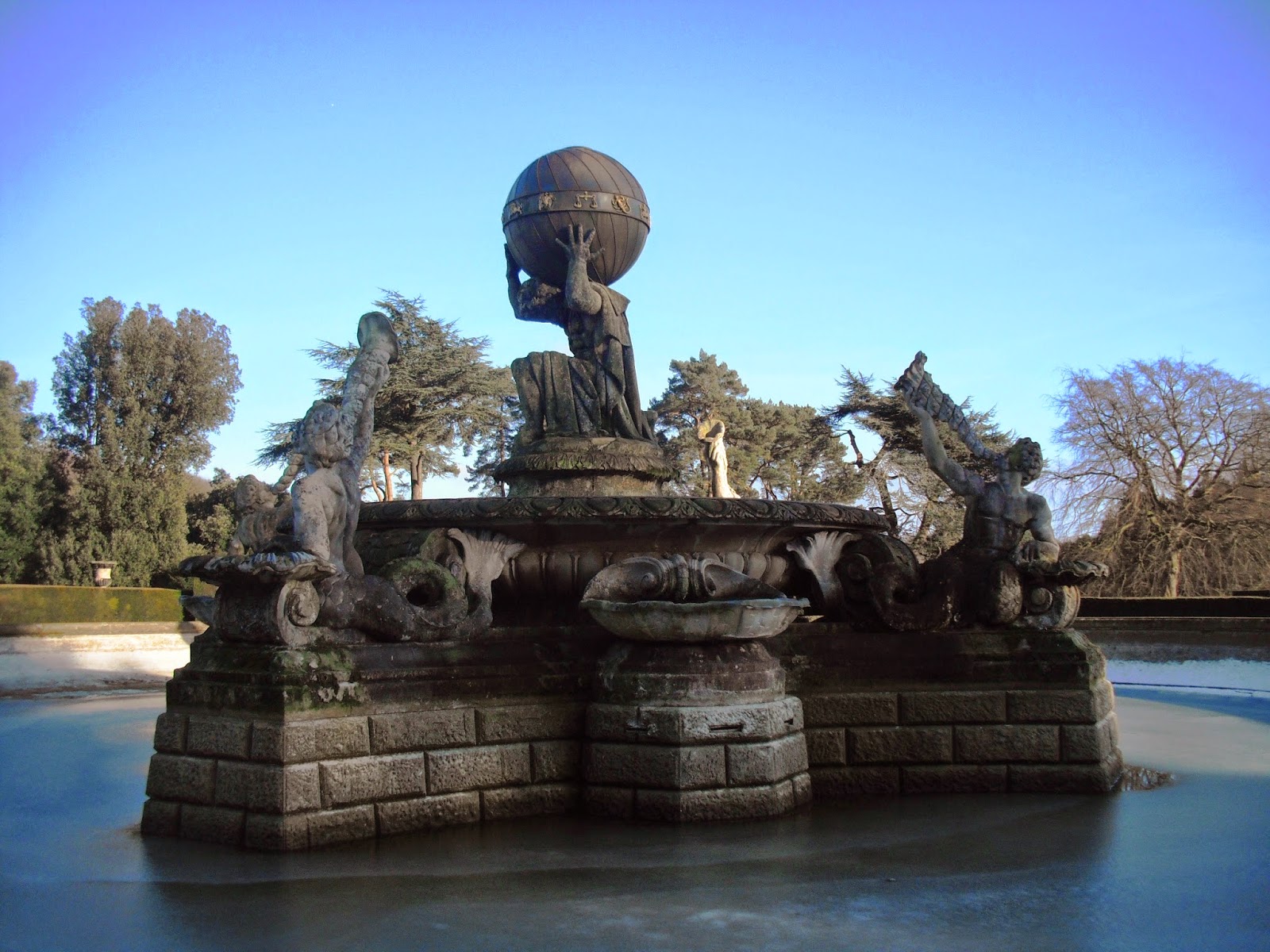 Through that gate is the courtyard. 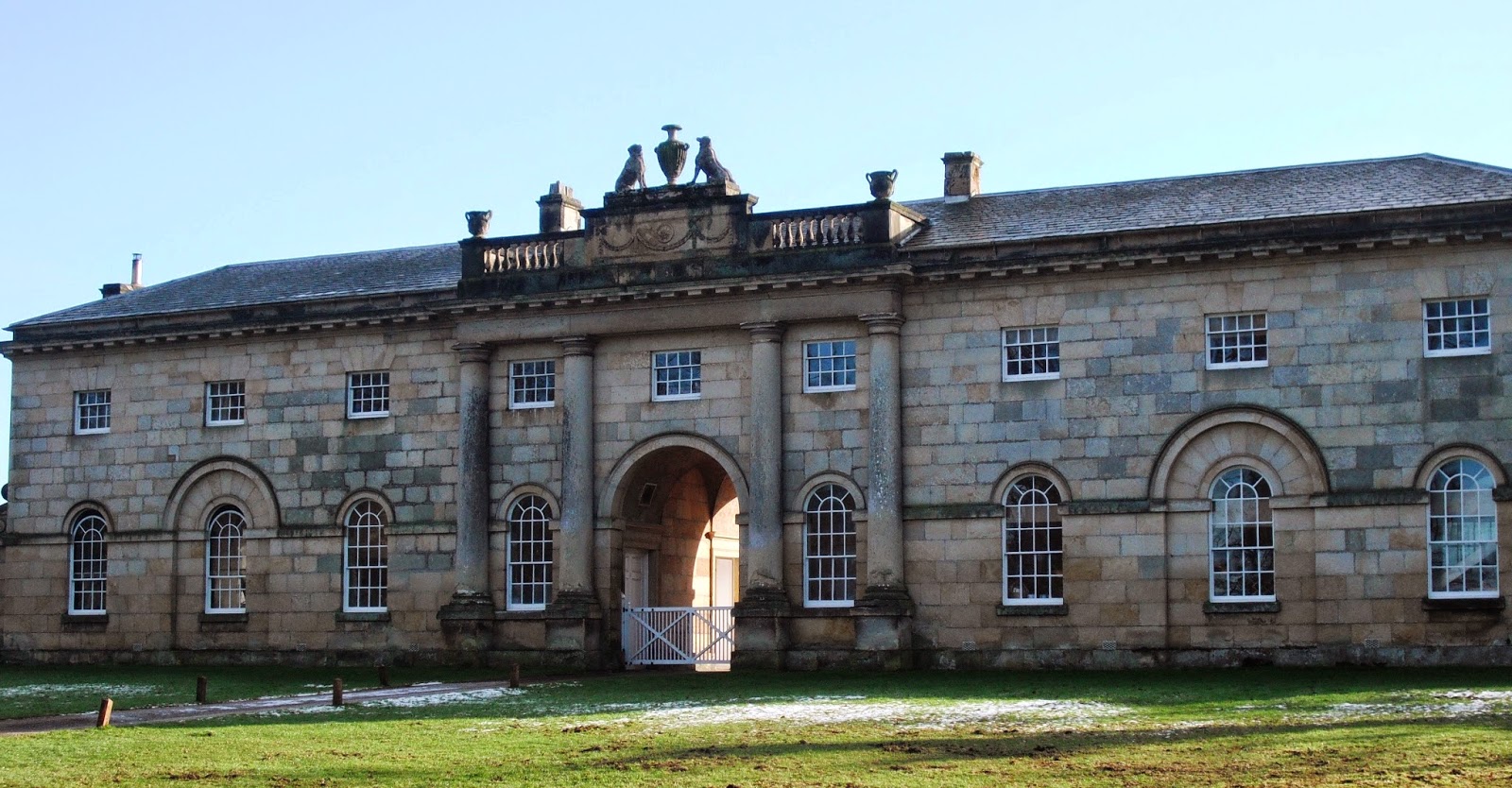 The side of the house has a lot of sun. 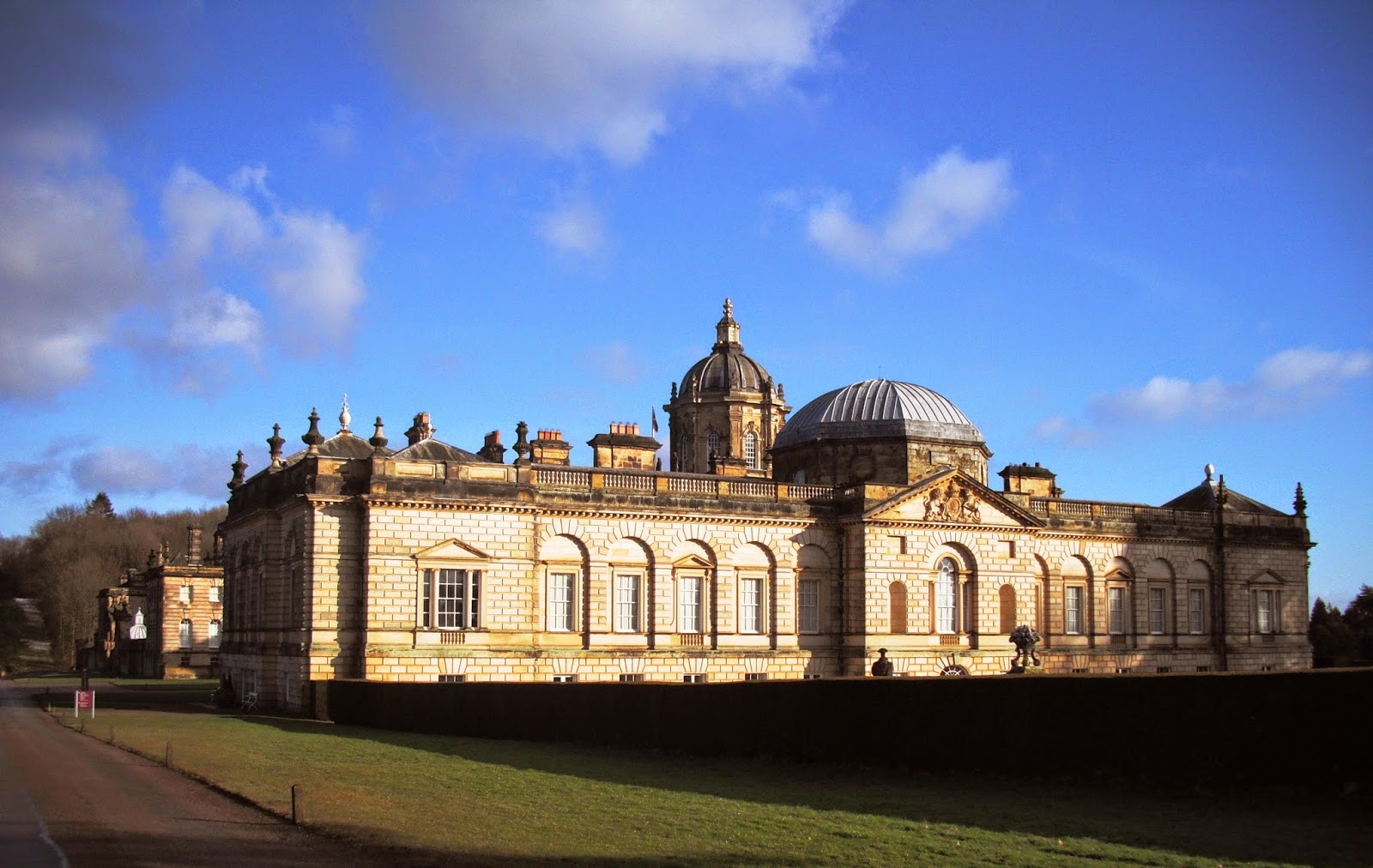 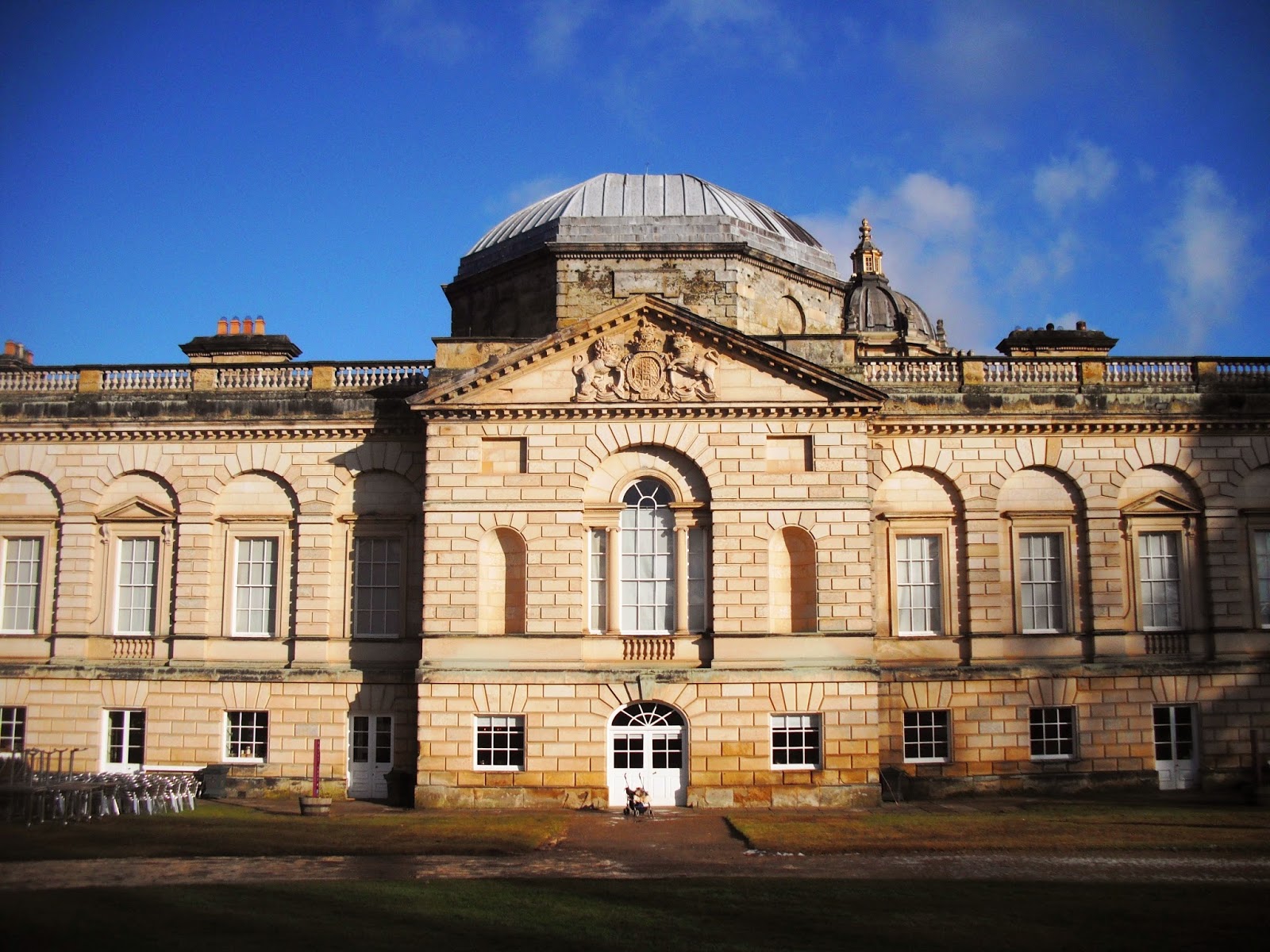 In the Stable Courtyard is a Cafe, Coffee shop, Farm shop, Book shop, and a Carriage House. 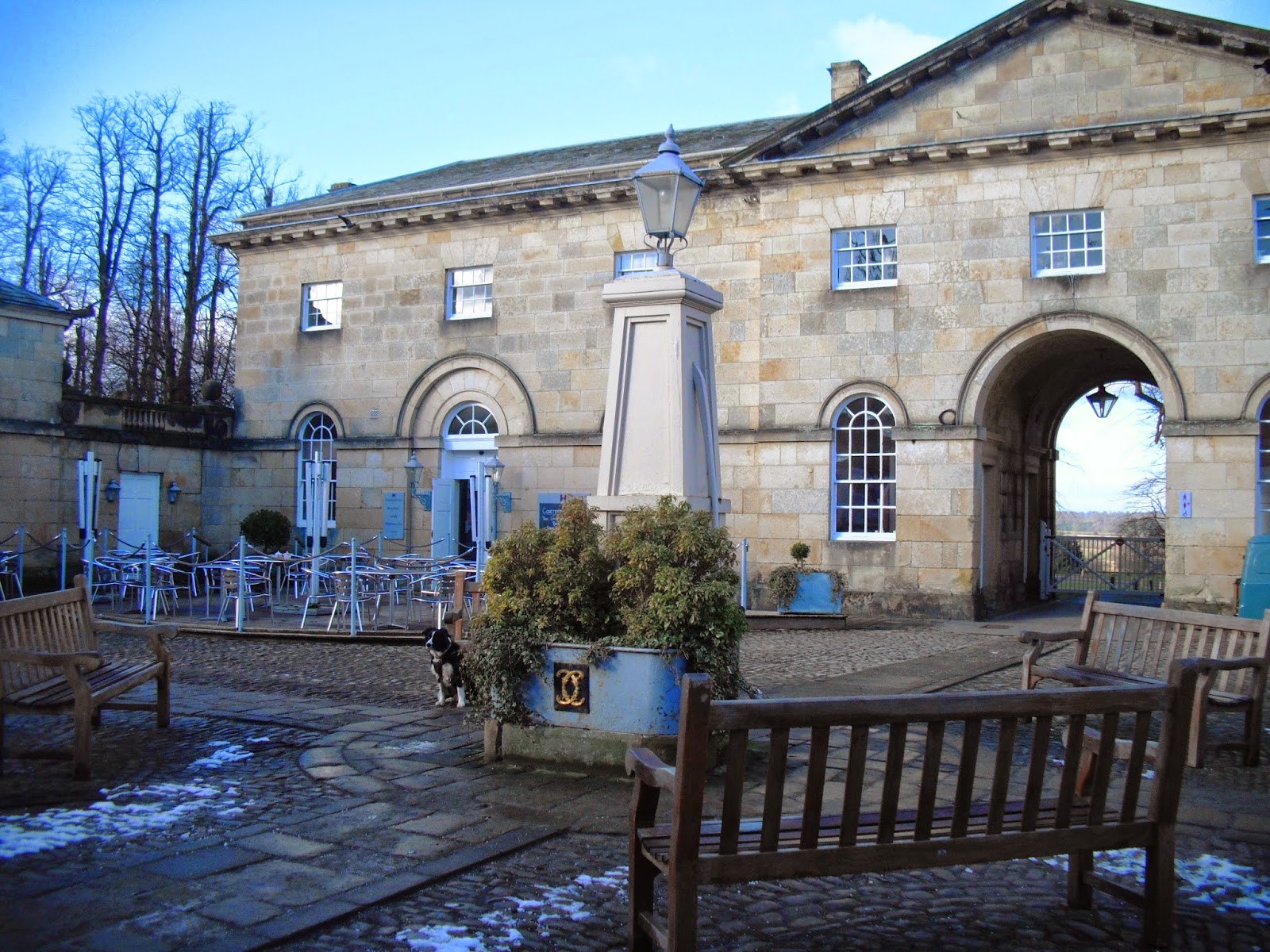 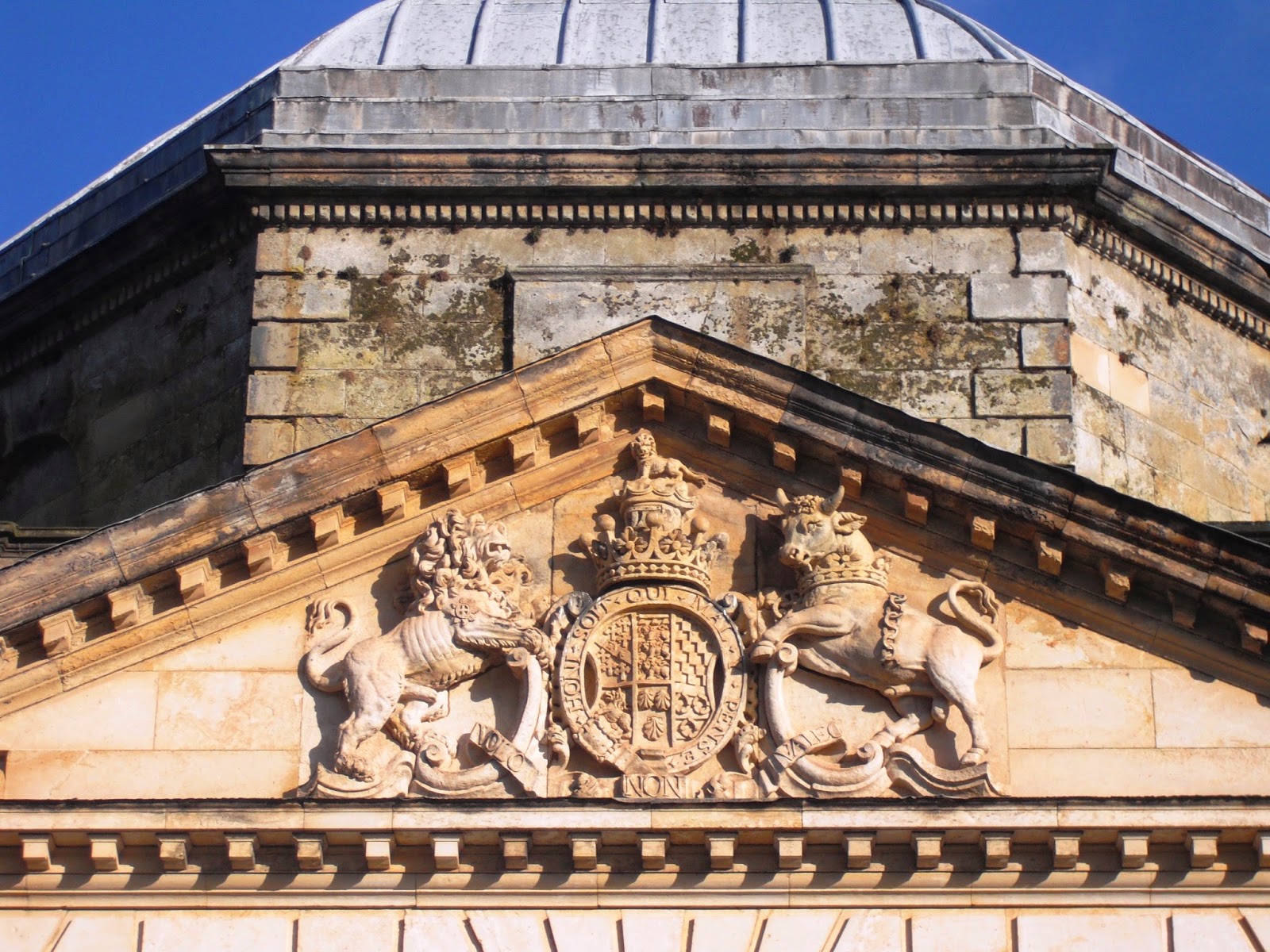 This is the front of the house, mostly in shadow. 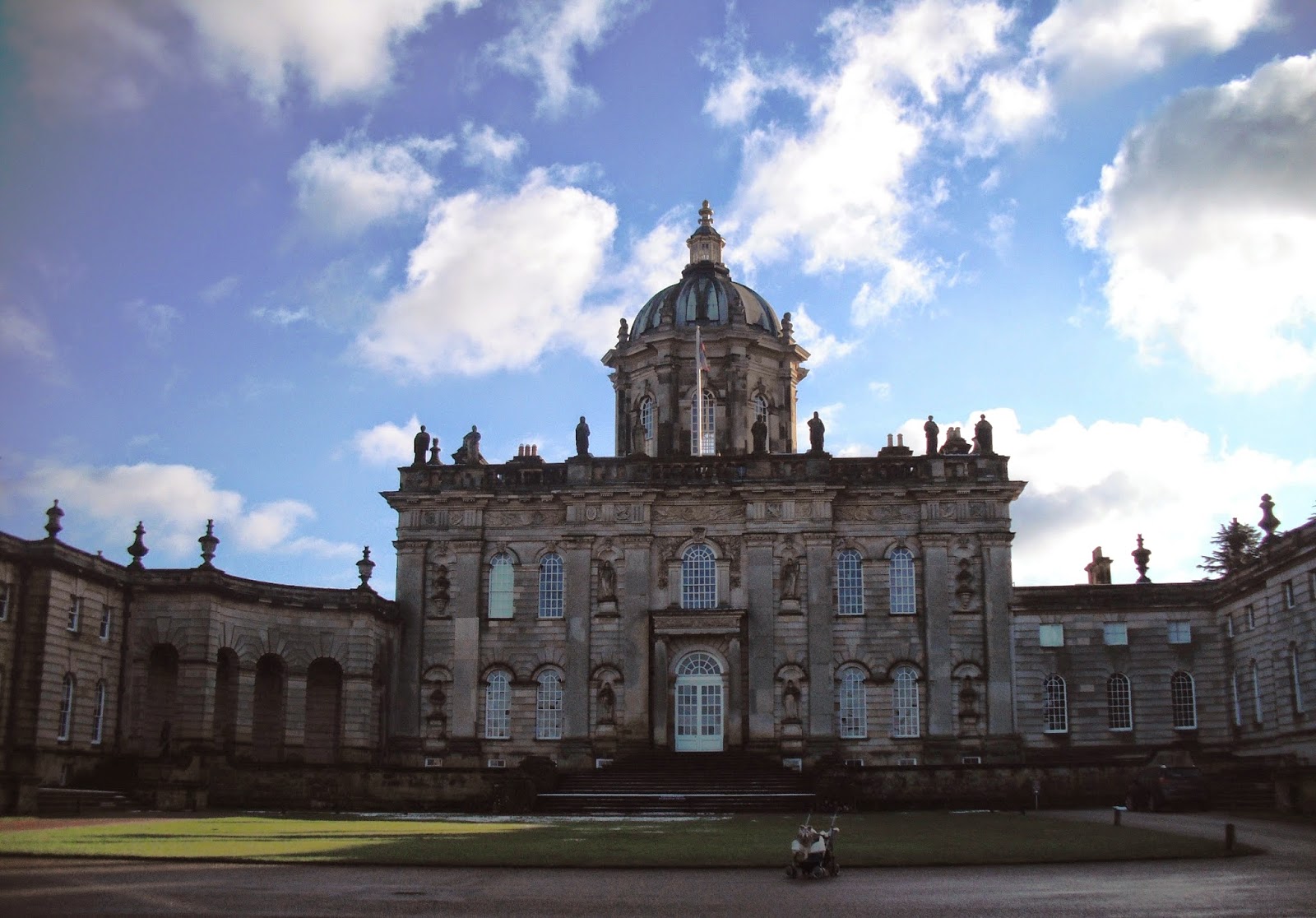 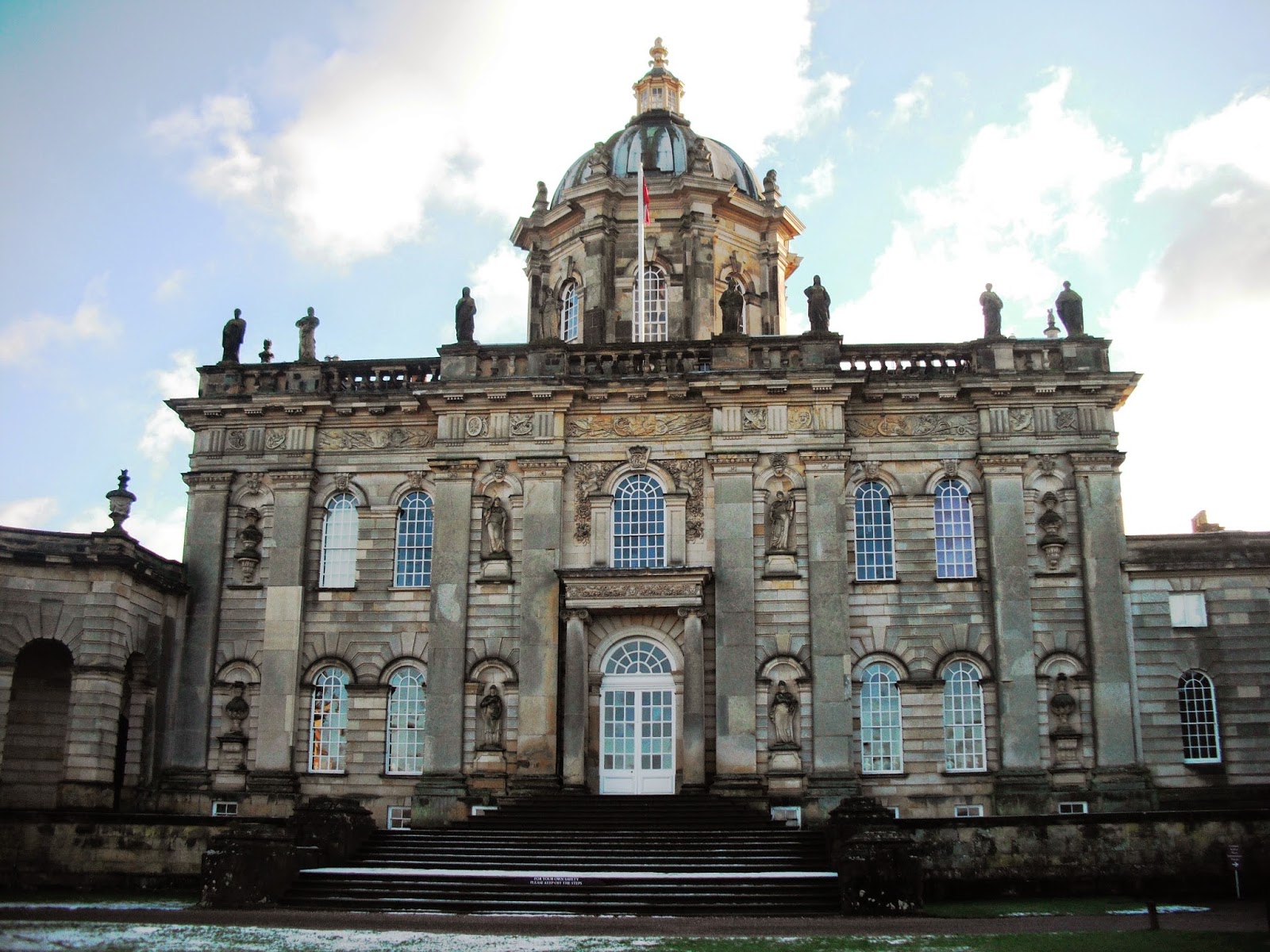 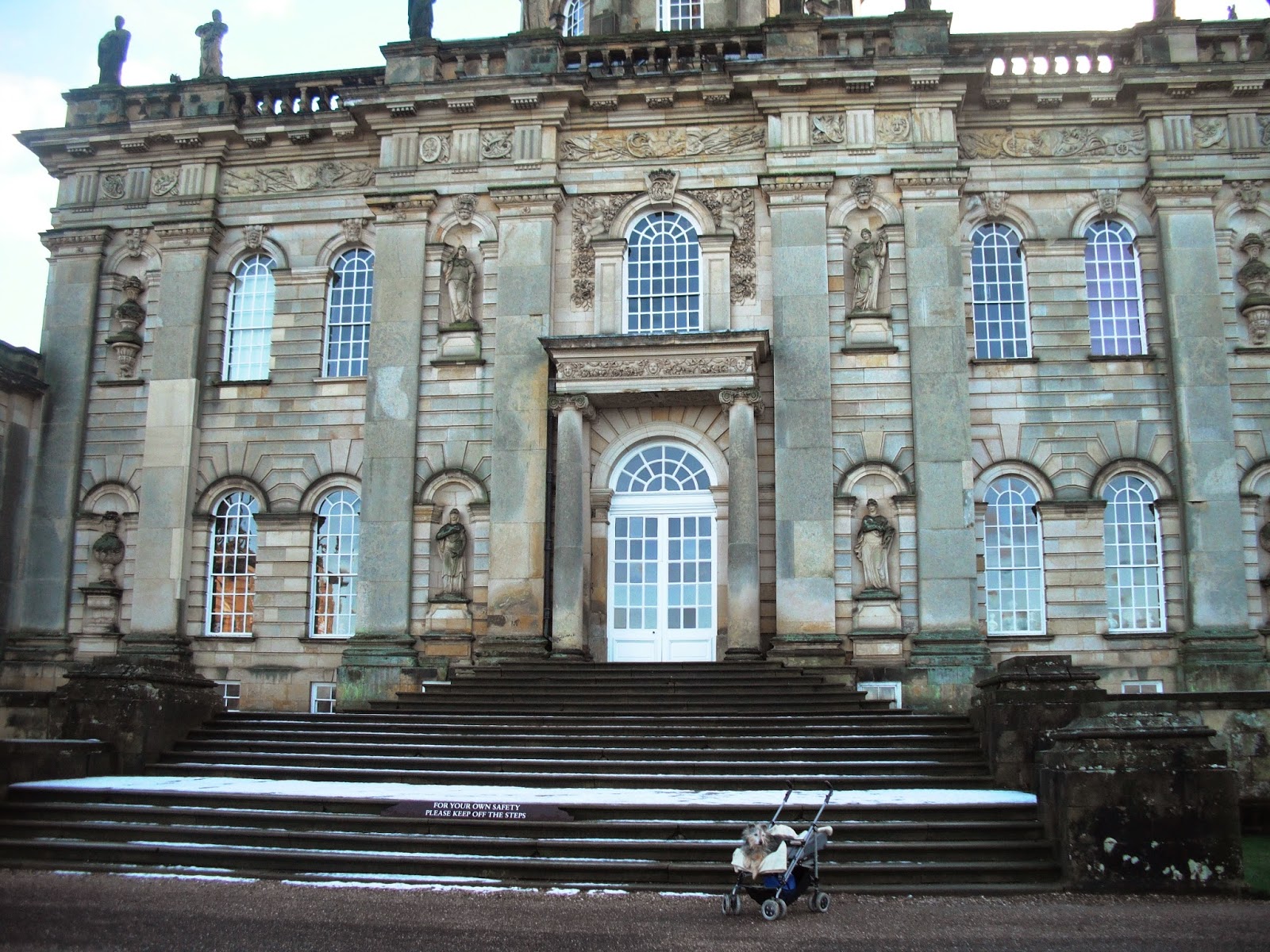 Watch out, the owl is about. Pic taken especially for Jane. 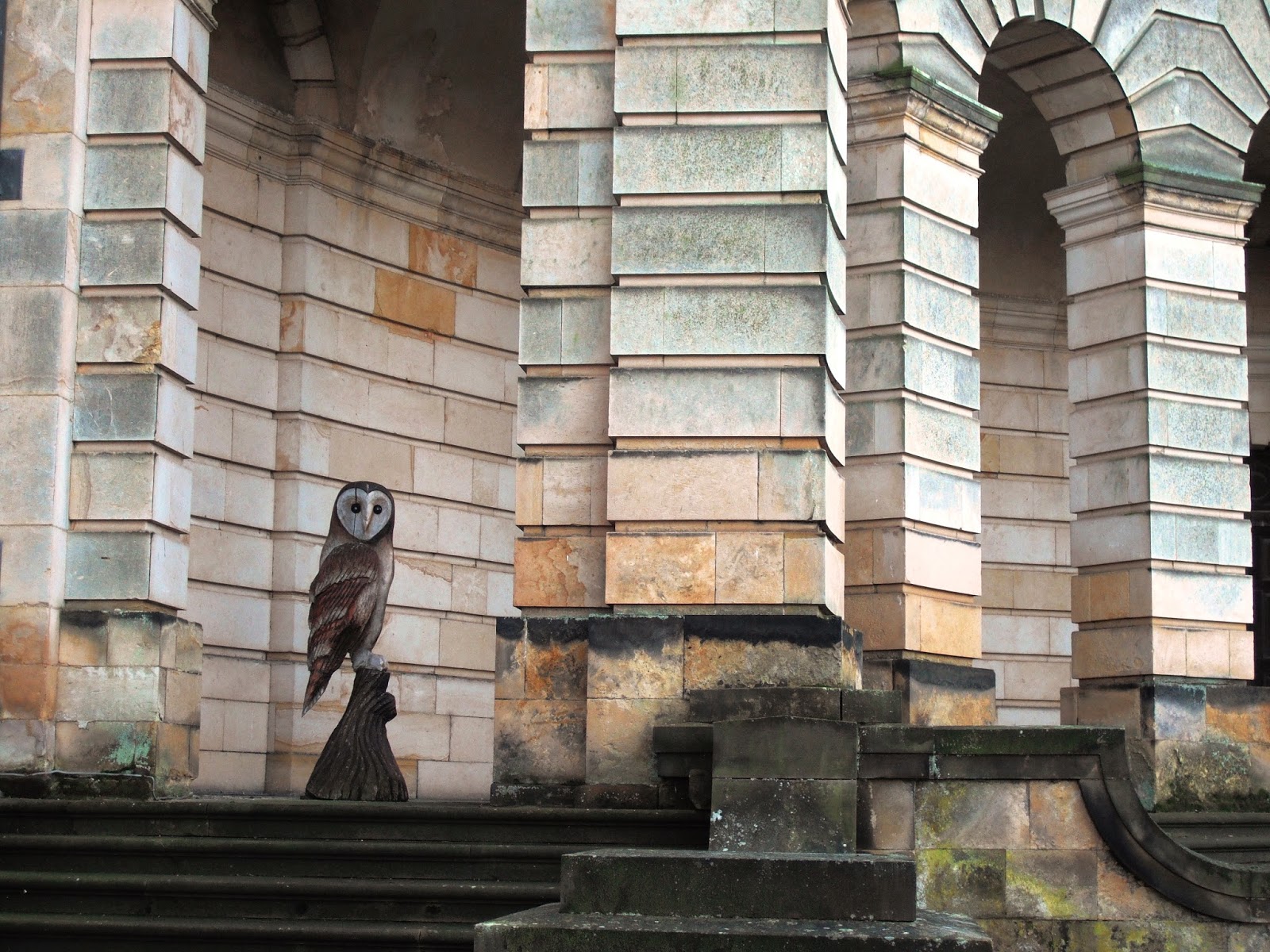 Some of the buildings were out of bounds for visitors. These are for staff and residents. 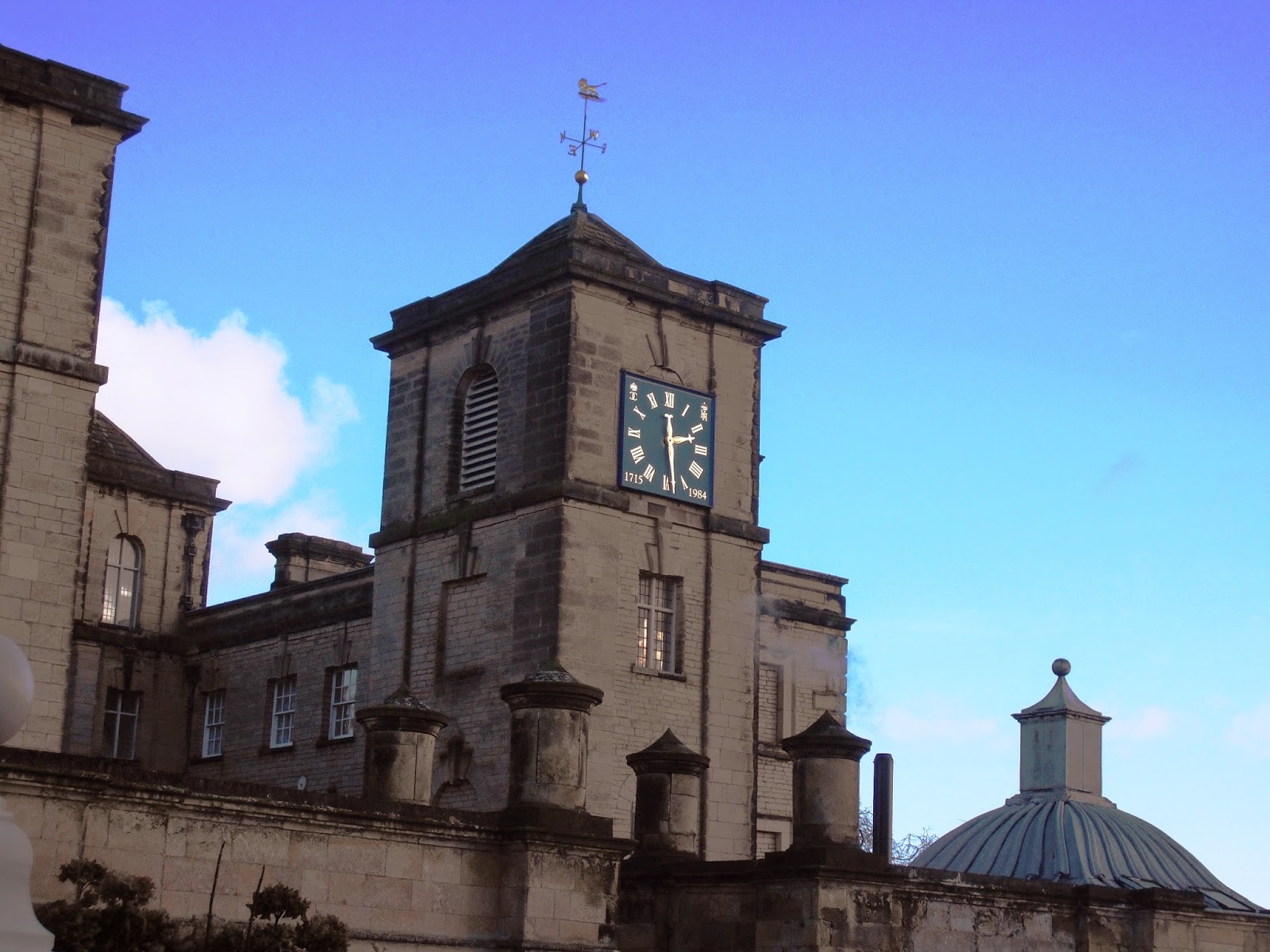 This is the view from the front of the house, looking across the Great Lake. We didn't have time to go over there. There is an Adventure Playground, Boat Trips, Cafe, and a Lakeside Camping and Caravan park. 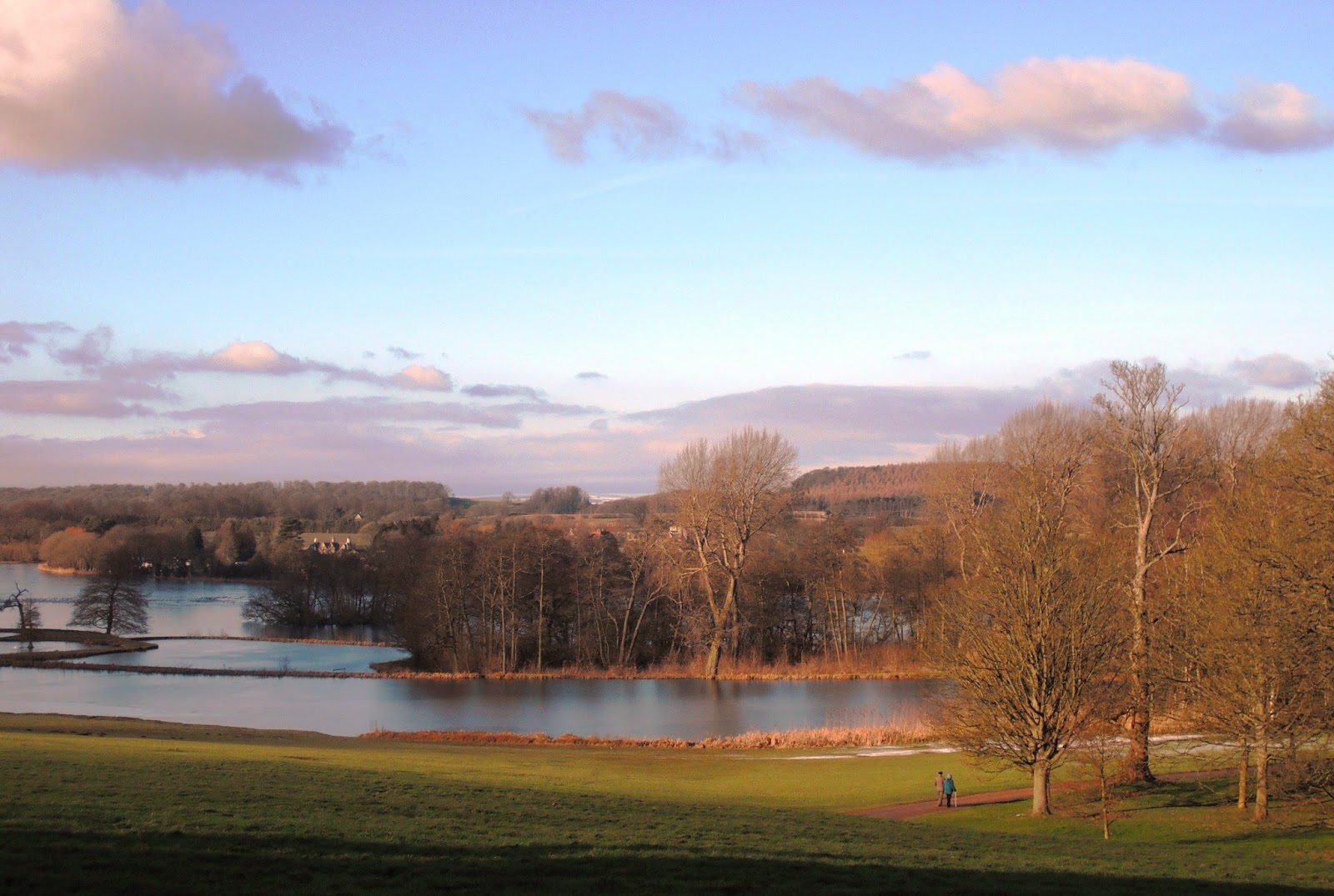 The Polar Bear Walk goes up into Ray Wood. There are nice walks through there, but inaccessible for buggies. 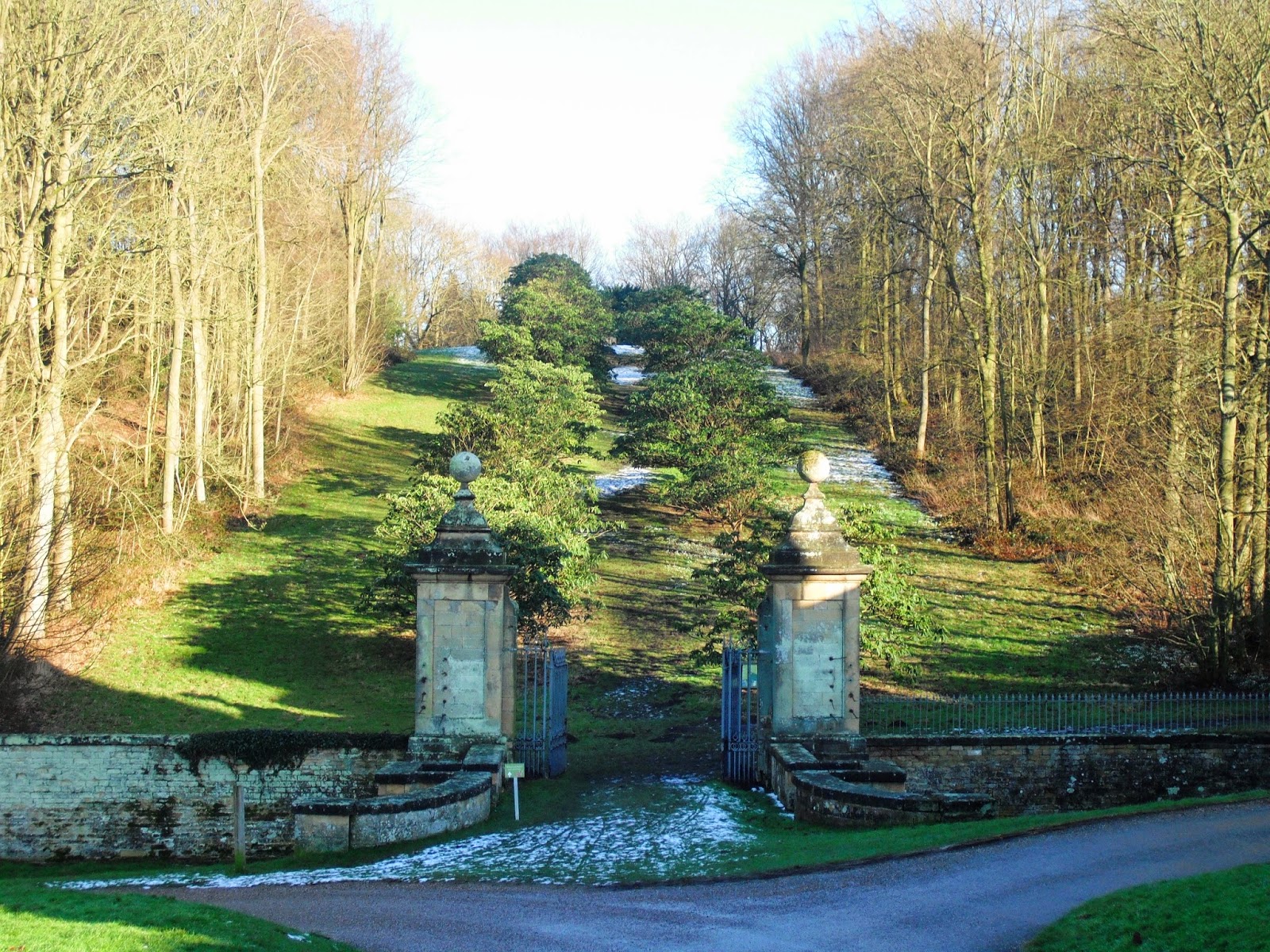 So we took the flat route to the Temple of the Four Winds. 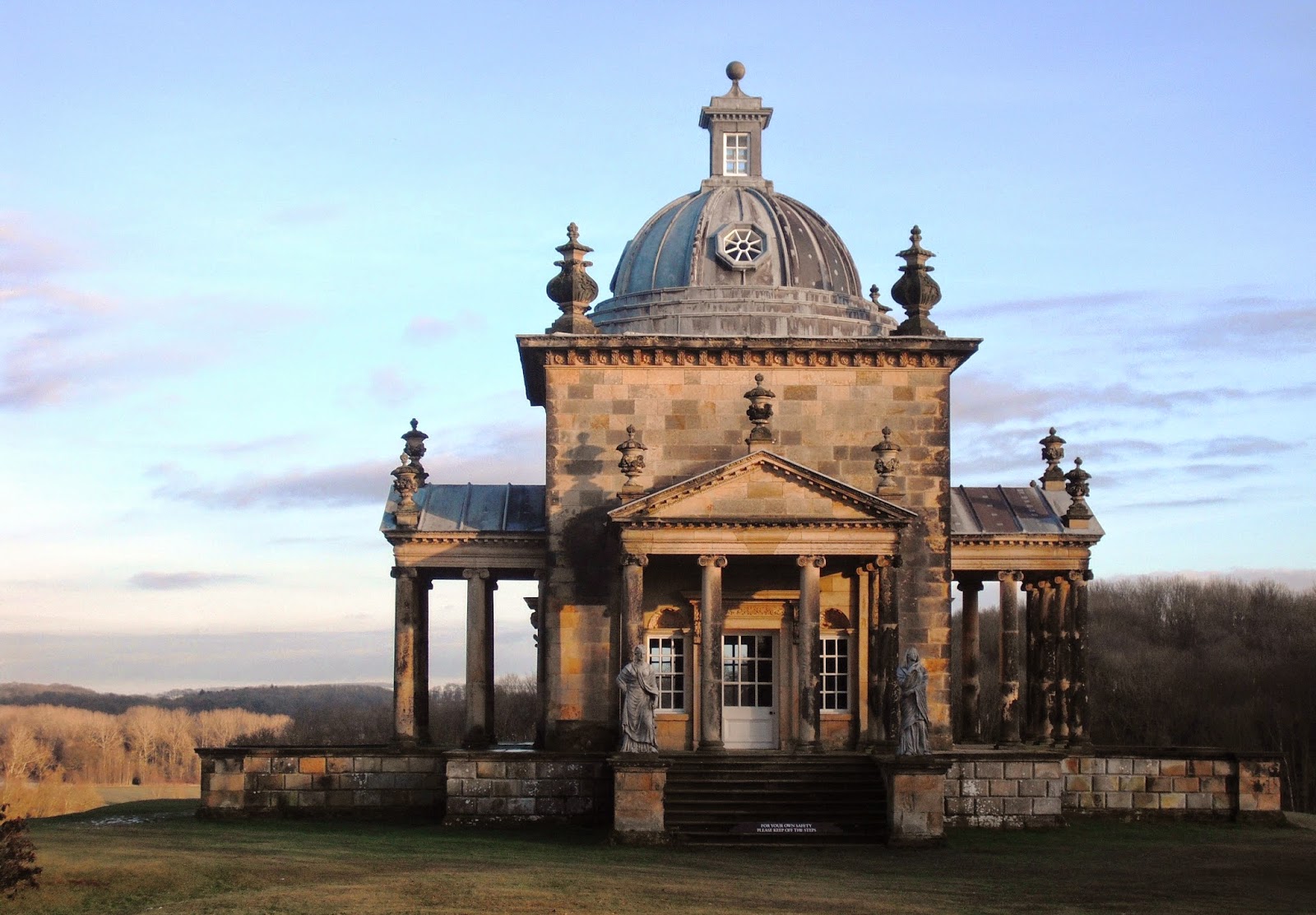 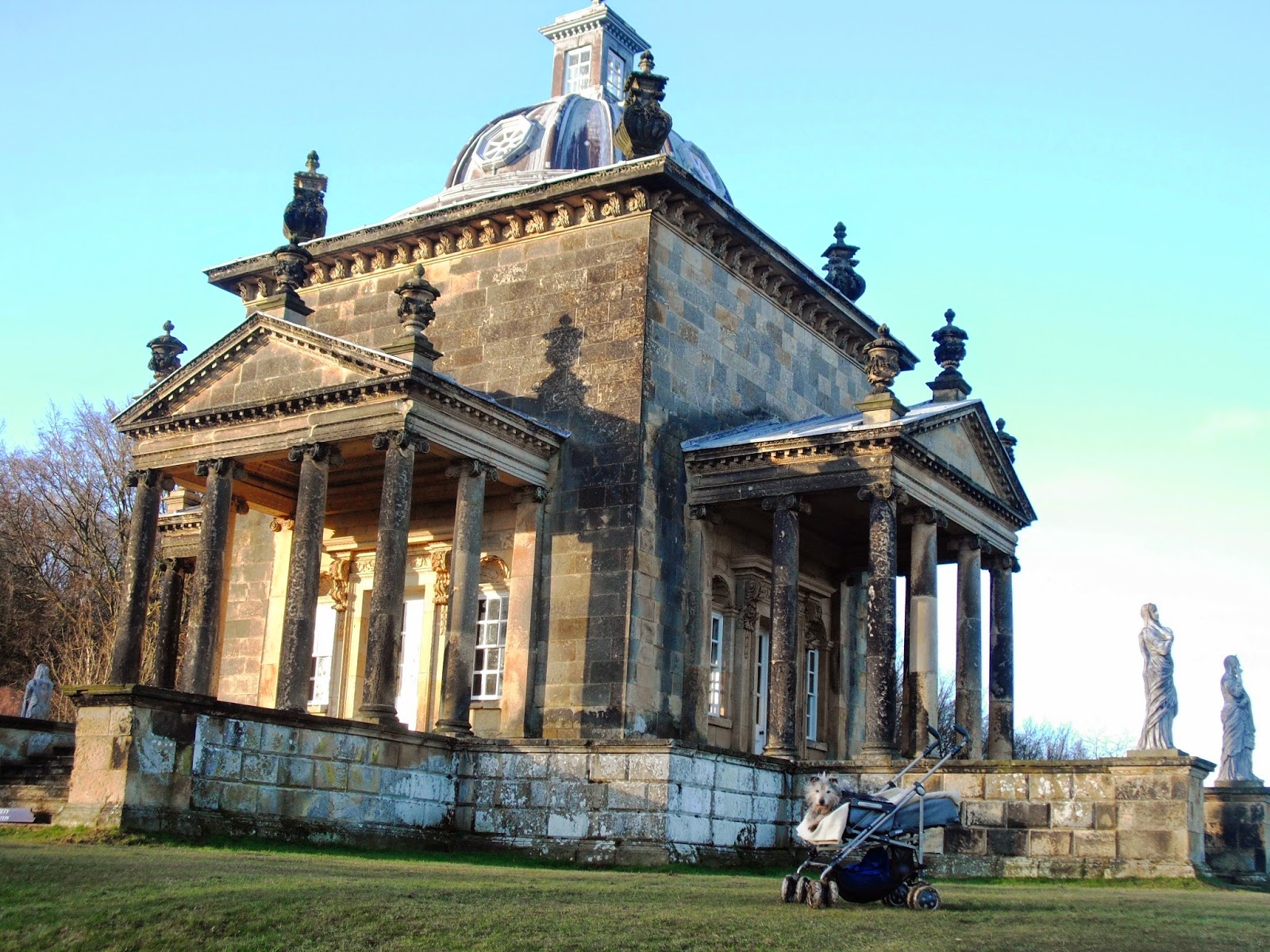 From there you can see the New River Bridge. Up stream from this is a Cascade, but it's frozen today, like most of the water. Walkers can go down there and have a look. Beyond the trees is the Mausoleum which says no public access on the map, but the tracks across the field indicate that people do go over there for a closer look. We don't have time today, and I don't fancy pushing the little fella back up the hill. 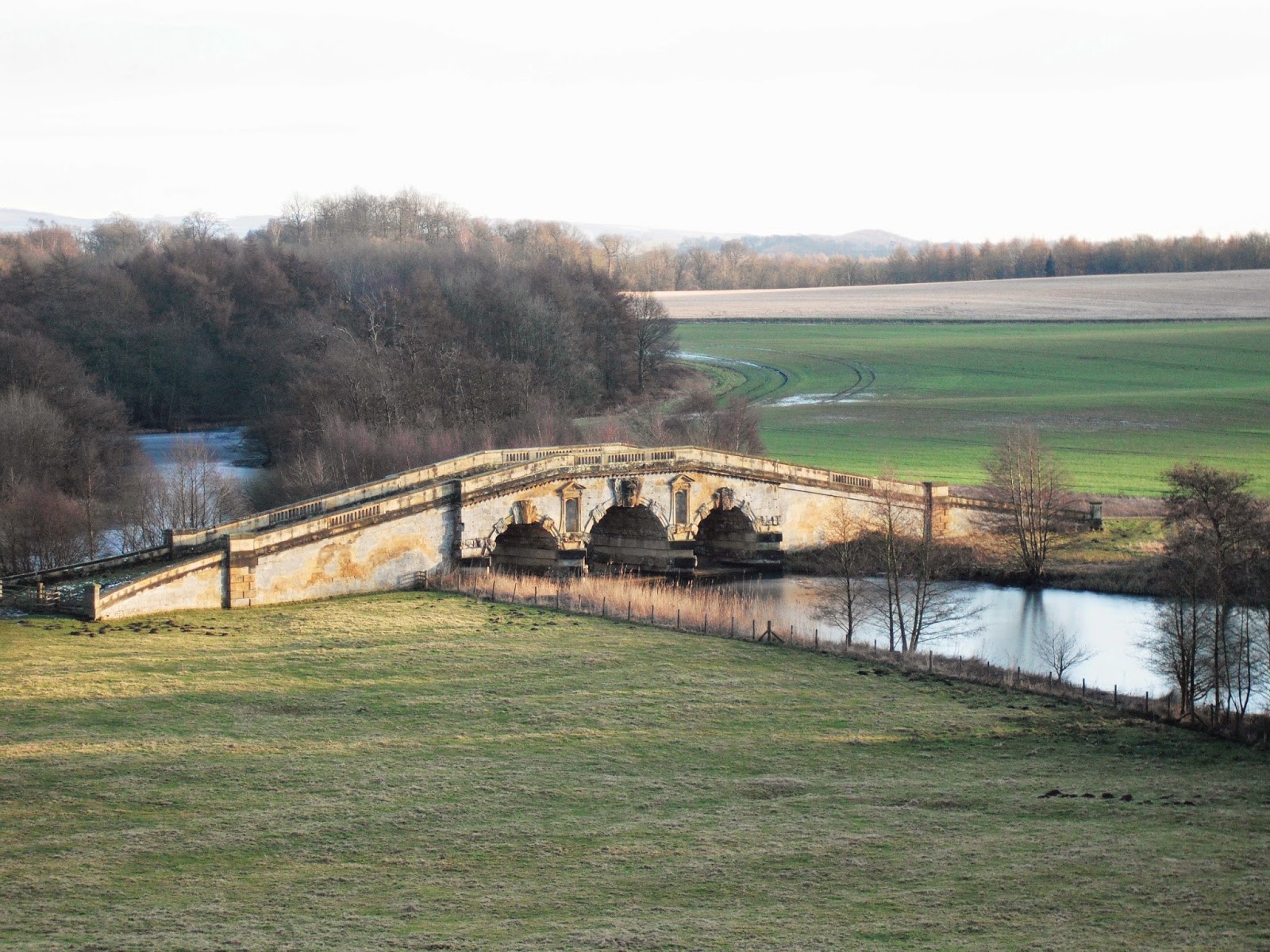 On the way back to the house was a lovely spot so sit for a while. We were high up looking over the South Lake. The Prince of Wales Fountain was asleep in the frozen water. It was like a little bit of heaven, so still, not even a whisper of a breeze, and so quiet. I could have sat there for ages, but time was getting on. 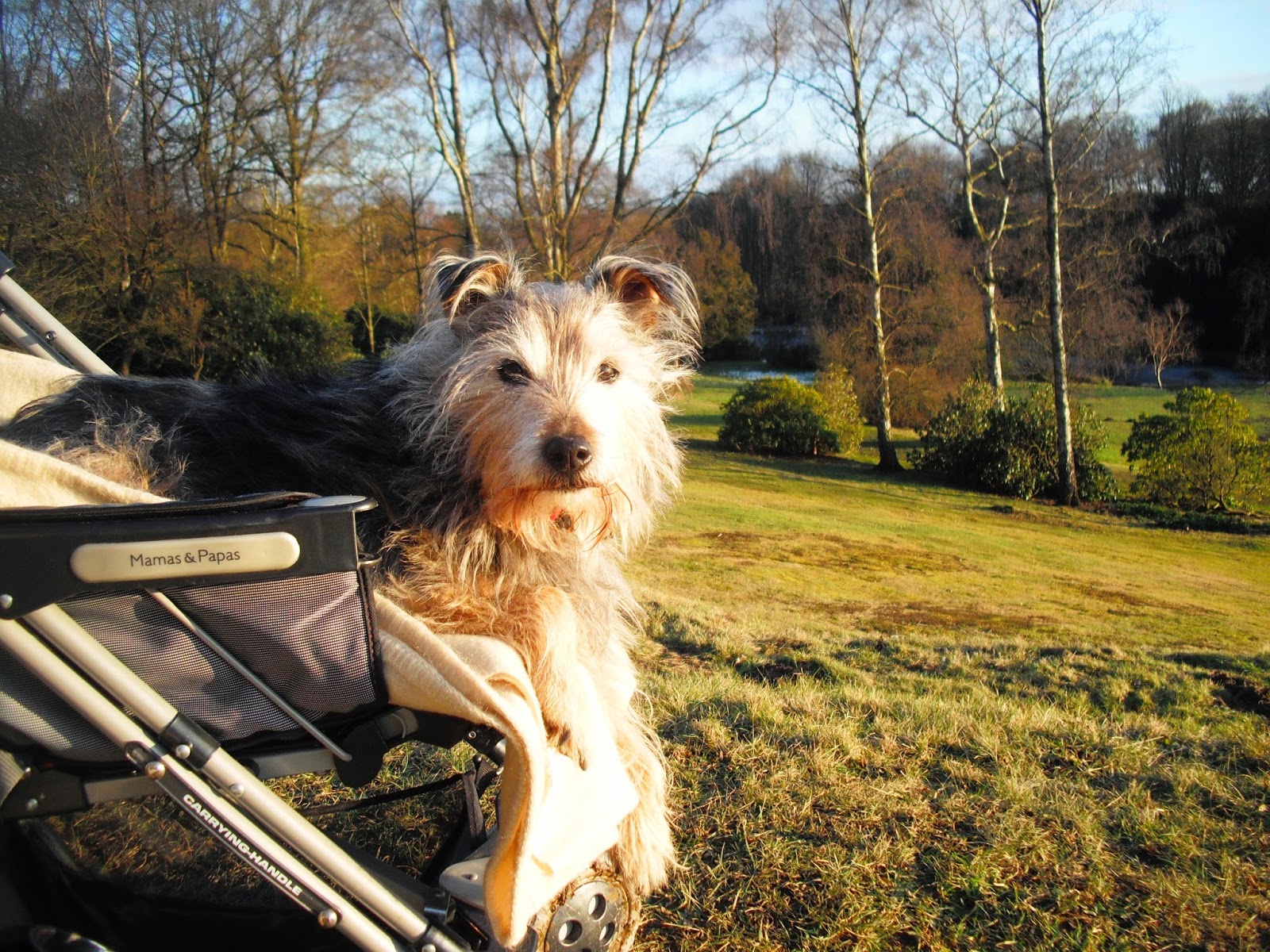 A quick walk through the Walled Garden. All the plants were sleeping for the winter. It was all very neat and tidy, the labels in the ground show where everything is planted. It would be worth coming back in the summer to see it at it's best. In the centre is a pond with huge fish. The water trickles in and the ice floats in chunks on the top. 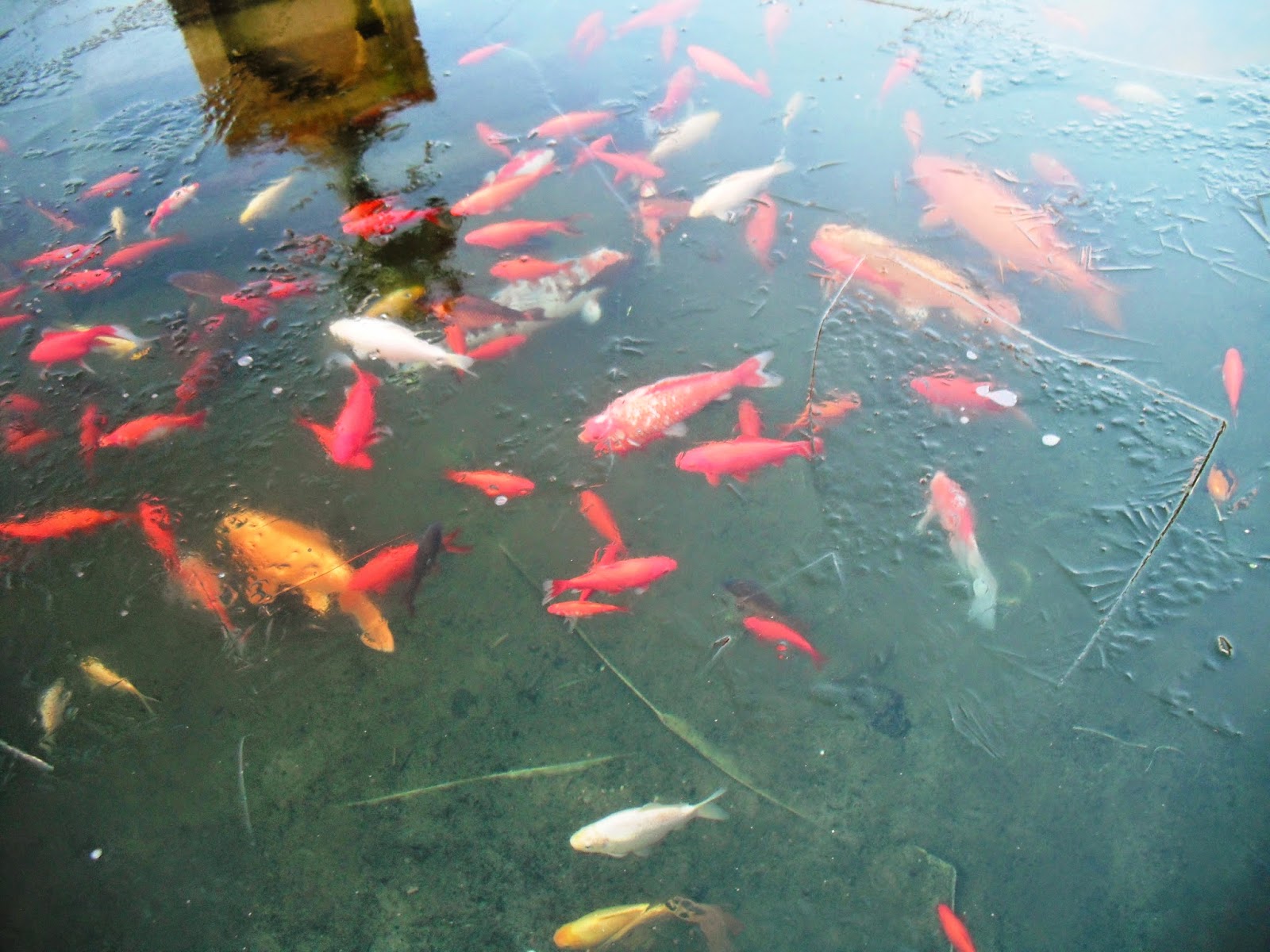 This brave little chap came right up to my feet. 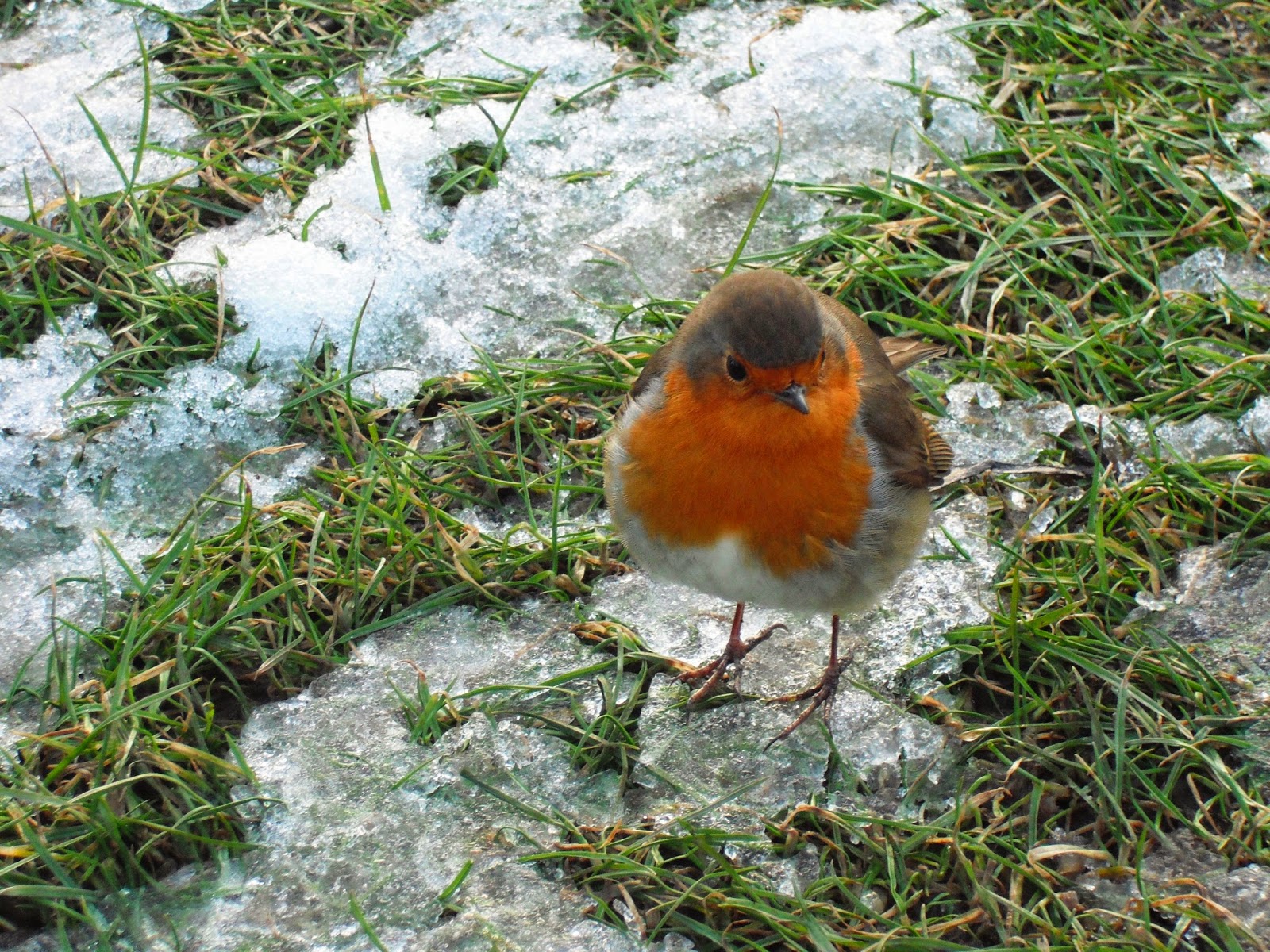 I popped into the toilet in the courtyard on the way to the car park. Peacocks are free to wander around. 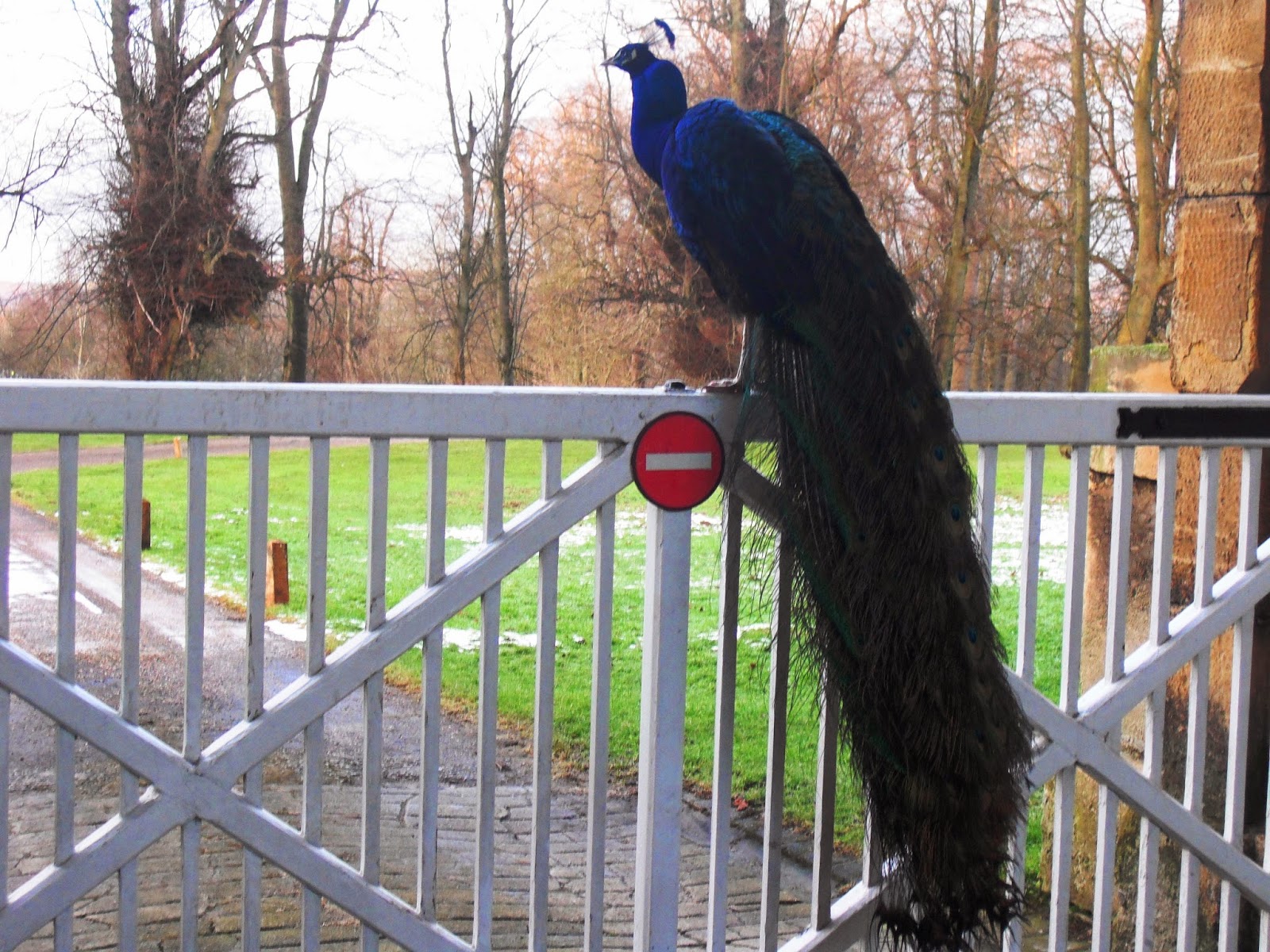 Very useful map, I will keep it for the next time I go. 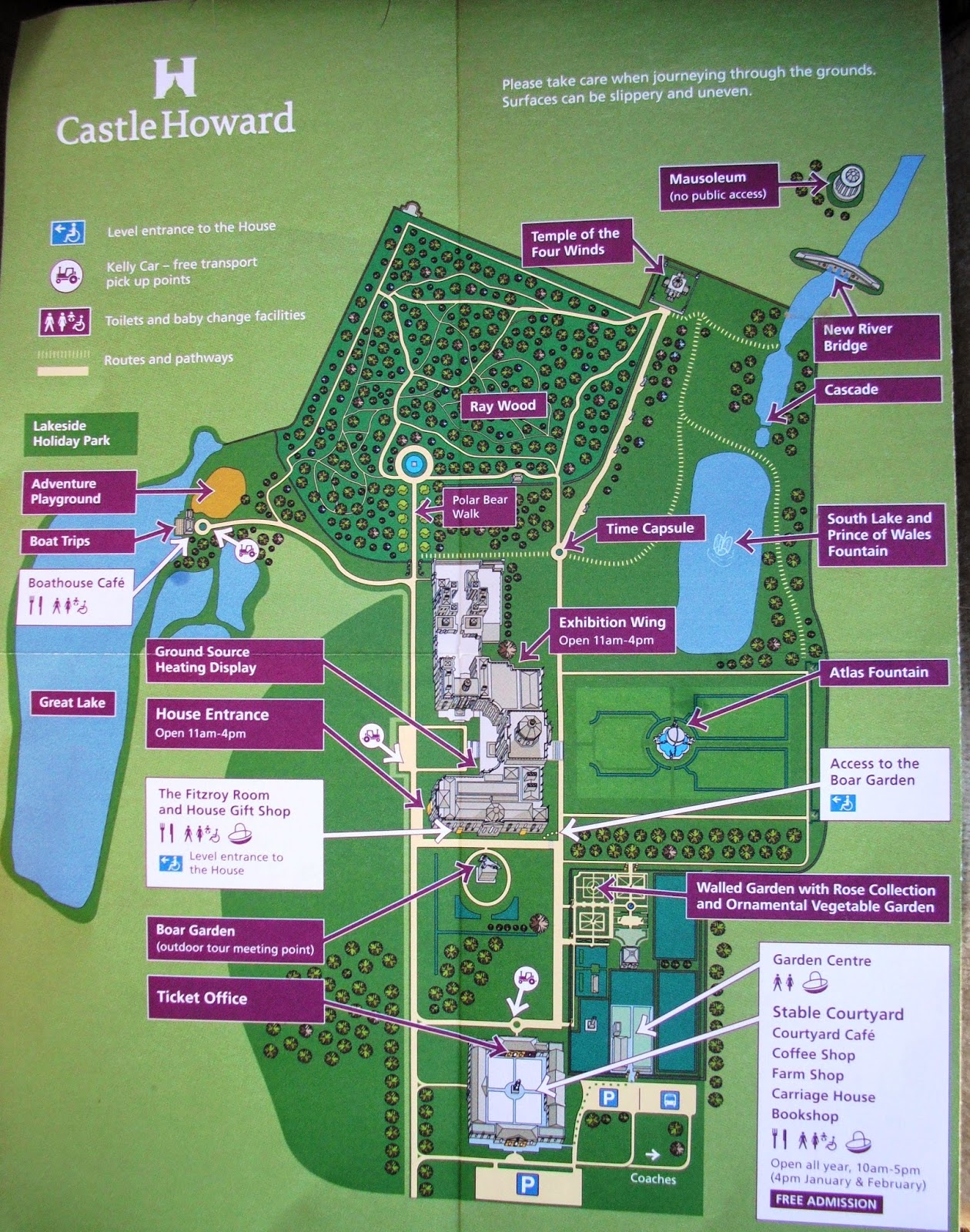 Fantastic, love the place, it would be good to stay at the camp site.

I called in at the chippy at Wetwang on the way back. It has a reputation for great food. My portion of chips was lovely. Some eaten in the car, and the rest warmed in the microwave with grated cheese on top when I got back. No faff in the kitchen tonight, ha ha.

I popped into Waitrose at Willerby as I was passing, just out of curiosity really. Good grief, aren't they expensive. Even more expensive than Sainsbury's. I found a couple of price reductions, not yellow stickers, theirs are red, and not that noticeable you have to search for them. I got a big bag of spinach, only 31p off, but better than nowt, I like spinach.

Anyway, that's it for tonight, it's gone 11pm and I should be heading up the wooden hill, so I'll say goodnight and Toodle pip.
Posted by Meanqueen at 23:11