As I sit here looking out of my window, what do I see? The tall trees in the garden directly behind mine, are dancing wildly in the wind. The hanging foliage of the weeping willow is wafting about like badly woven hair extensions. The makeshift gate, formerly known as a pallet, has blown over, and the brown wheelie bin now lies on it's side, lid wide open.  Even the cats have more sense than to go out there. 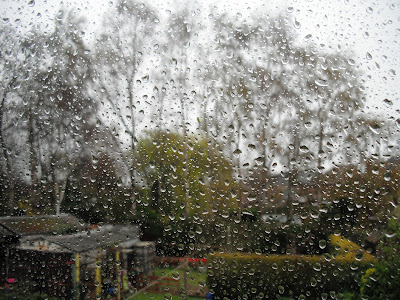 Oh my word, now it's starting to snow again :o( Things are not looking too good at the moment. Think I'll stay indoors.

Yesterday I purchased my train ticket for my journey to Morecambe next week. It was a nice day and I was full of the joys of spring, looking forward to my adventure. Now look at it. One could easily become despondent when one has organised a holiday, and the weather is threatening to put the mockers on it.

I could easily curl up in a ball, refuse to go out, and give the whole idea up as a bad job. In situations like this I always tell myself things could be worse. The roof could blow off the house, I could be living in the far north of Canada with snow up to the top of the door, or a flash flood could sweep through the ground floor leaving mass destruction in it's path. Of course none of those things are likely to happen. So what have we got here? Yep, it's windy, yep it's raining, yep there are a few flurries of snow, but this is today. Tomorrow could be different, it could all calm down and brighten up. The forecast is frost overnight, and tomorrow will be brighter. That's what they say and that's what I choose to believe. You might have guessed that I'm a glass half full kinda gal.

Things are never as bad as you first imagine them to be. I can think of lots of examples where I thought things couldn't get any worse. Like the time my beloved Ford Focus was rear ended and written off by a taxi driver. My goodness I was flippin annoyed, but hey it could have been worse, I could have been sitting in it at the time of the accident. I could have been injured, but I wasn't.

Like the time I wrapped a lorry trailer round a gatepost because I was going too fast. I thought it was the end of the world, I was so shocked. But it could have been worse. Instead of turning into the entrance of a factory on a quiet country road, I could have been in a busy shopping street, and wiped a cyclist out as I did the turn. Flippin heck, I was lucky there.

And what about the time I fell for the smooth talking guy who promised me he would love me forever as we planned to spend the rest of our lives together. It was all lies lies lies, all he wanted to do was to control me, and still keep his freedom. I went through a lot of heartache for that man, thank goodness I found the strength to get out when I did. But it could have been worse, I could still be the quiet frightened little mouse he turned me into. But I fought back, and I won :0) I had a lucky escape.

So, wet and windy and rainy and snowy today, but what for tomorrow? I bet it will be a lot brighter, well that's what I think anyway. Toodle pip.
Posted by Meanqueen at 10:55