Hi Peeps. Several of you have asked some questions. I am happy to answer them, as sometimes I tend to ramble, and don't always explain myself very well. So, to tie up a few loose ends, here goes.

Matthew asked if I got a look at Fountains Abbey? Well guess what? I got a peek but couldn't go in as it was too late and they were closed. But shock horror, I took these two photo's and missed them off Day 5 Grassington to Ripon. So thank you Matthew for bringing it to my attention. This one is the view towards Pateley Bridge as I was walking away from it, up the hill past the cemetery. 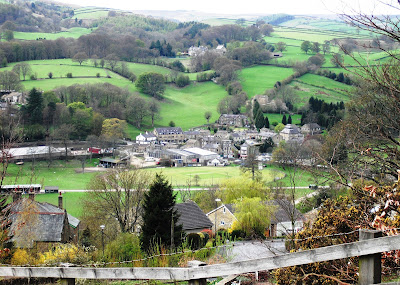 And this is the peek I got of Fountains Abbey. It was getting late and I was concerned about finding a bed for the night. The gate was locked, I thought I might get a better view as I followed the road round the other side, but it was surrounded by trees. 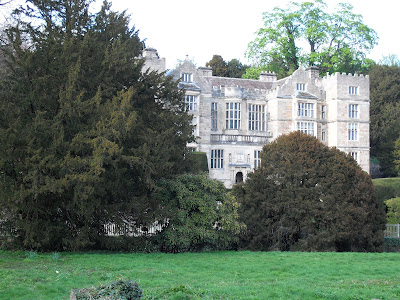 Cynthia asks what kind of camera I use? Here it is Cynthia. A simple point and shoot Finepix J25. I take a lot of photo's but also delete a lot. I take several shots of the same thing from different angles, then pick out the best. I also edit with the simple Microsoft Office Picture Manager, cropping, colour enhance, and brightness and contrast. 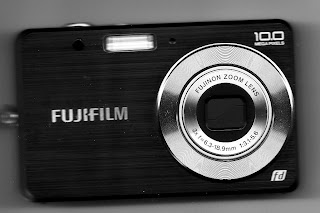 I am not really sure how all the settings work, just use the basics, let it find it's own focus from Macro to Landscape. 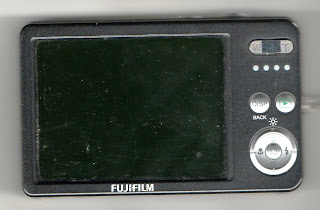 ElaineInPhilly asks how do I remember everything to write? I take a notepad with me but very rarely use it. I always think to myself no need to write it down, I will remember it, and of course I don't, ha ha. I make notes on my maps, scribble on the edges, usefull for later when writing it up. Yes, the photo's are a prompt as well. I do tend to remember when quirky little things happen, such as the people I meet. The easiest way to make notes is to photograph what you want to remember.

Elaine also asked if I was eating enough? To be honest, I don't actually need to eat that much at any time, whether away or at home. I never eat big meals of stodge, the only time I have a big plate full is when I do steamed veg at home, because it doesn't hang around in the gut for hours. I prefer to eat small portions several times a day, and any doctor will tell you that is the best way to eat.

I ate the breakfasts at the B & B's but didn't eat any meat, so it was mainly eggs, beans, hash browns, tomatoes, and mushrooms. Every day I wrapped up the toast to take with me for later. I found I was feeling full for a long time after these breakfasts, so only needed to pop into a Spar shop to get something for tea. Tins of mackeral fillets, pasta salad in a plastic box, etc. Then I would eat half of it, and nibble the rest while walking the next day. I only once had something to eat in a pub, and that was only a baked potato with a tuna topping. I think generally people eat too much. I listen to my stomach, it tells me when to eat.

Jane asked would I do a walk again, or do I prefer new walks? Jane, I prefer to walk where I haven't walked before. Although this trip did include one or two places I had already seen. I have been to a lot of places in Yorkshire, so to come straight across the country from one side to the other, it was difficult to not come through Grassington and Pateley Bridge. Also I have been to York and Beverley before, they are near enough to visit on a day trip.

PP asks, do I take a tent and sleep anywhere, or would I get chased away? Dont Unplug also asks if I camp out? I don't have a tent light enough to carry, though I am thinking of getting one. If I took camping gear I could not take the net book, the rucksack would be too heavy. If I camp it's with my car, drive to a camp site. PP, there is such a thing as wild camping here. It's not strictly legal unless you get the landowners permission, and most will give it. Some people will camp discreetly, hide in a corner and no one will know they are there. The rule is you arrive late and leave early, leaving no signs that you were there. You wouldn't get arrested if you were caught.

Campfire, I arrived late at York Hostel, so I didn't see much of it. I had breakfast so didn't see the members kitchen, I sat in the empty dining room blogging, and I was in a four bedded room with two others. It seemed a good hostel.

Several people asked where do I plan on going next? I've a few ideas buzzing around in my head, something will come to me in a flash of inspiration I expect. I fancy the North Norfolk coast, Ireland, Isle of Man, and the Cotswolds. I could go anywhere, I'll let you know. I need to save up some pennies.

Judy wants a summary of the miles covered. Here is a day by day account.
The breakdown of miles is as follows.

Sorry I missed you Eileen, I got into Morecambe at 5pm and found a B & B pretty quickly, as it was cold. I had a short walk along the prom then retired to my room.

Carol asks how is my garden? Not much happening at the moment, Carol. Waiting for sown seeds to come up in the pots, more to sow. It keeps raining. The weeds need chopping down, the grass needs mowing. I will be growing veg in the same fashion as I did last year. Chuck some seeds down, rake them in, and see what happens. As long as I get some veg to keep me going, not expecting loads.

Welcome back Andrea, I'm glad you've found some posts particularly helpfull. Please stick around, I love it that you pop in.

Email ThisBlogThis!Share to TwitterShare to FacebookShare to Pinterest
Labels: holidays/days out, reflections on life, walk