I was hoping to have the finished patchwork quilty thing to show tonight, but even with my little helper, it is still not ready. I've been working on it for most of the day, with a dog walk in the middle to get me out for an hour or so. I am still walking my friends dog, as he is not up to being dragged around, with a gammy arm which he is not supposed to be lifting. She is a very strong dog.
Anyway, I'll show you where I am up to now. I am using a duvet cover costing £1 from a charity shop for the backing. Here I am trying to cut the edges off to separate the two sides. Heidi nearly got a manicure in the process. 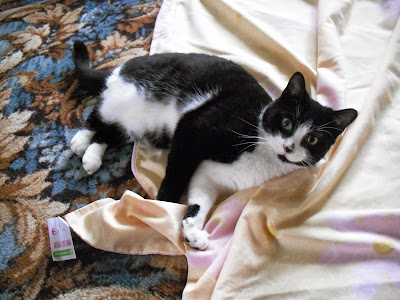 I had to move some furniture around in the living room to make a space big enough to lay it out on the floor. It's a pale yellow colour with pink flowers. I smoothed it out as best I could, and pinned the corners to the carpet. 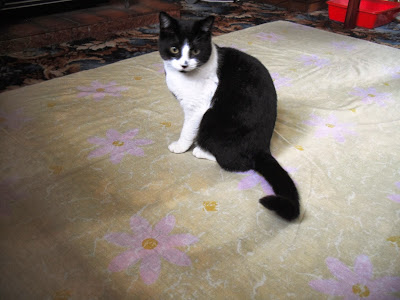 In the middle of the sandwich I am using a very old candy striped flannelette sheet. I don't know how old this is, I suspect about 30 years, I'm sure I had it in my first house. Smoothed out and pinned on the backing. 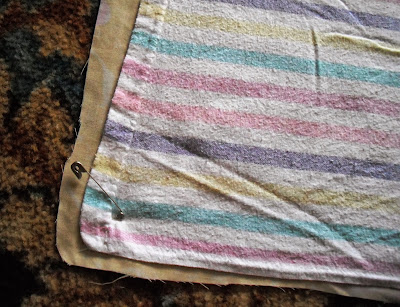 Oooh, I've got an itch, just a minute while I have a scratch. 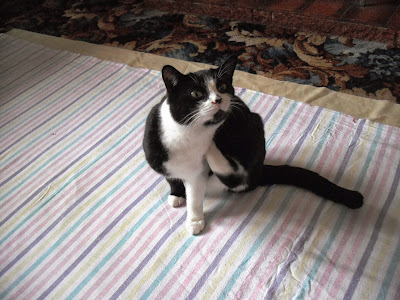 Next the top, placing it almost to the edge on two sides, then trimming the excess on the other two sides. Next I set about pinning the layers together with safety pins. I had to buy a packet from the 99p shop because I didn't have enough. I found they weren't going in very easily, they were sticking in the carpet. 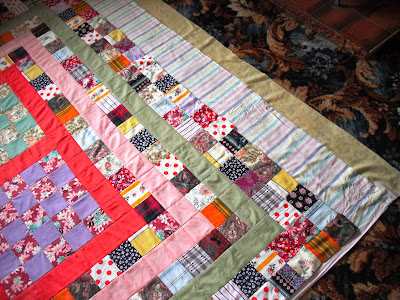 So I got a long flat piece of laminated wood and slid it underneath where I wanted to put the pins, moving it across as I pinned. It was much easier to do it this way. I only pinned into the patterned squares because I was planning on sewing only on the plain squares. 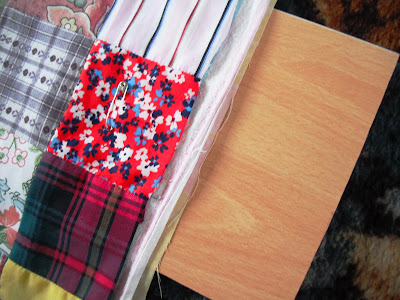 All pinned up and starting to machine sew. Heidi is on hand to supervise. 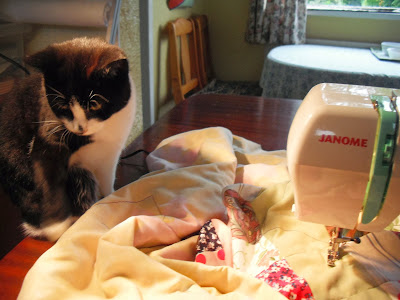 At this moment in time I am half way through it, so I am going to keep going over the weekend to hopefully get it finished. Looking good so far.
Have a nice weekend. Toodle pip.
Posted by Meanqueen at 20:07