As you might have guessed by now, I absolutely love free stuff. I love it that I am given stuff, I find stuff, and I gratefully accept stuff, from people who want to give away their stuff. I also give away my stuff that I no longer want or need, I give it to charity shops. Stuff should be mobile, it should move from person to person and from house to house, and be used until it is no longer fit for purpose. If possible, new stuff should be made from old stuff. Stuff should be re purposed, re worked, re designed, and re used. When it is broken it should be repaired if possible, or taken apart and used for another job.
Take my shopping bag for instance, I made ten of these from a gazebo roof that I found in a skip. It was the end of a caravan show and one of the traders had dumped their gazebo because the frame was broken. I fished it out and brought it home. My shopping bags will out live me, and hopefully get passed on to someone who can use them. 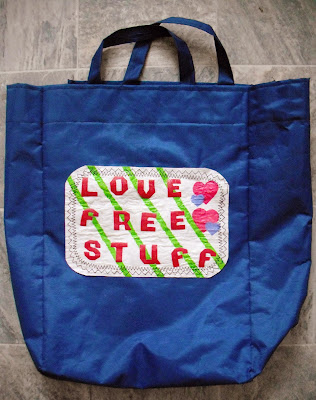 This morning I walked past a house with a skip on the driveway, they were having a clear out. Me being nosey I stopped to chat and have a look at what they were throwing out. An elderly relative had moved into a care home and they were clearing the house. This galvanised potting table was on the lawn and they said I could have it. Wow, that was lucky, I went home and got my car out to pick it up. Then there was a hose pipe, and a garden tool, don't know what it is but I will pass it on if I can't find a use for it. Isn't it a smashing little table, perfect, just the job. 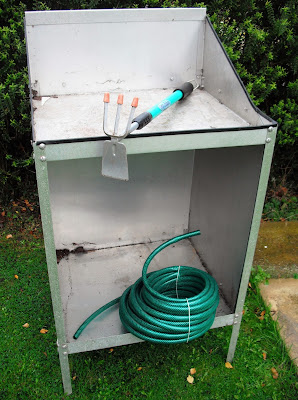 Then they said there is an office chair if you want it. Yes please, I love office chairs. I love the way you can push them around the room to wherever you are working. They are much more comfortable than an ordinary straight backed chair which you have to lift to move. There is a damp patch where the rain dripped on it, but that will be dry in a day or two. It's like new, no signs of wear and tear. I am pleased with my new second hand stuff. 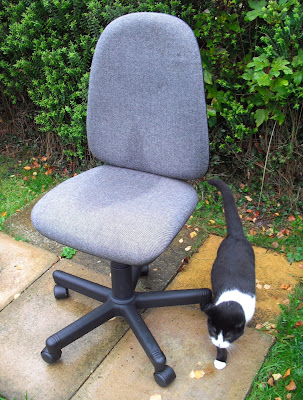 Yesterday I took a box full of stuff to the Age UK shop, so some out some in. There is no need to buy new stuff these days, most things you can get second hand if you are not in a hurry and look around.

My lunch today was done on the cheap. I bought a cauliflower yesterday, and made some soup with the leaves. I added two dessertspoons of porridge oats, a veg stock cube, shake of curry powder, and a dab of garlic puree. Eaten with a slice of wholemeal bread. Very nice and very cheap. 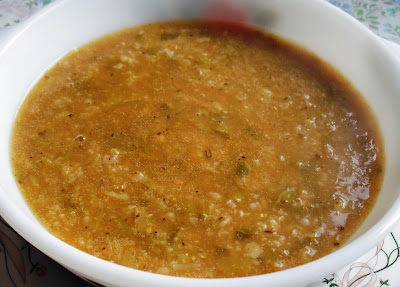 I'm off back down the road to see what else they are putting in that skip, they said to come back later and have a look. I love free stuff.
Toodle pip.
Posted by Meanqueen at 14:20