I was checking out the BBC iplayer last night, looking for something to watch while I ate my dinner. I don't like to just sit and eat, I like to keep my mind occupied while I feed my body, doing two jobs at once. My dining table is where ever I happen to have the computer switched on, upstairs in the office for the big one, and downstairs in the living room for the little one. Last night was upstairs.
I always go to the Factual programmes first, prefer documentaries and real life situations. I was beside myself with excitement when I found this programme on page two. Oh wow, The Crane Gang, all about heavy cranes doing heavy lifting. Take a look at this beauty in the screenshot, couldn't you just drool over that baby. What a magnificent piece of engineering. 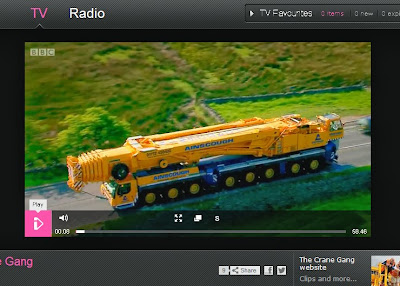 When I finished watching episode one, I carried on and watched episode two. Two hours of back to back sheer bliss. Boy was I in heaven. If you have a leaning towards large structures, and the problems of moving them from A to B, then this is for you. If you are not particularly interested in macho stuff, watch it for the skill of these dedicated men, and the humour they inject into a very demanding job. I had three years of working with crane drivers and they have my respect. I found this programme a pretty accurate portrayal of the construction industry. The crane drivers live, breath and eat the job, in fact they don't call it a job, it's a way of life. You have to be dedicated to work away from home for weeks at a time, and live in the back of a van, or a mobile crane.
Here is a link to the BBC iplayer.
http://www.bbc.co.uk/iplayer/episode/b03bmg9n/The_Crane_Gang_Episode_1/
And here is a link to the same programme on yootoob. I have embedded it so I hope it works.


I've had a look through my photo's and picked out a few of my loads which involved craning them on and off my trailer. This is the first time I had what is classified as an abnormal load, which needed a police escort, a movement order, and a second person in the cab. The young lady sat on the side is someone I found to come along and act as the mate. My boss thought it would be difficult to find a male to come with me, he said, what if the mate is married, you have to stay out up to a week at a time and sleep in the cab. This girl came out with me just the once, she didn't like it. After that I told the boss to find me a male person. We used to get some funny looks, ha ha. After a few loads with a few different male mates, people got used to it and started to treat me with a bit more respect. 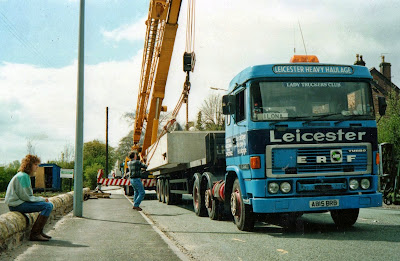 Can't remember where this was taken, I have a boiler on the back of my low loader trailer. 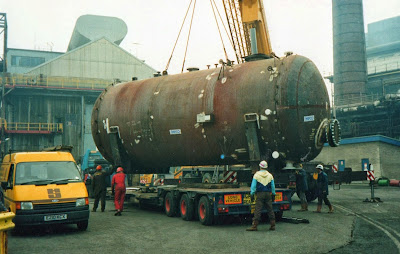 It's a shame this photo is discoloured, the light got into the camera. They were joining up two sections of the M25 over the top of the river at the Dartford Crossing. This was going to take the pressure off the Dartford Tunnel. I had a concrete and steel bridge beam on the back. They had to close this road at West Thurrock, underneath the slip road for the new bridge, for several weekends. 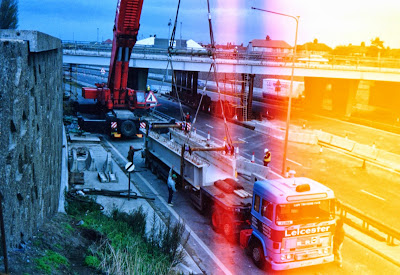 Part of a new air conditioning unit. A bit of a squeeze to get the cranes and the lorries in. 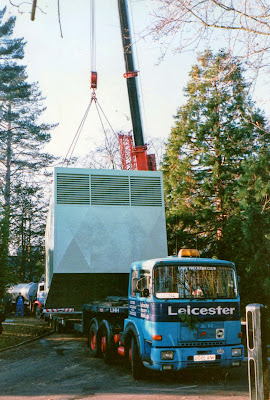 I had to reverse back into this building at Scunthorpe Steelworks. The heat from the hot metal was scary. I was glad to get my load off and get out. 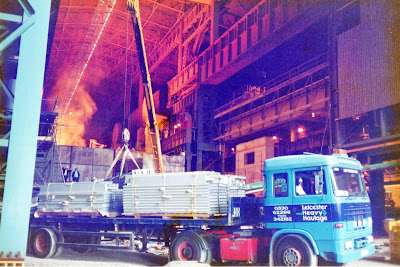 This stainless steel tank was wrapped in six layers of plastic shrinkwrap. I still had to put three tarpaulin sheets over it as it had to be kept bone dry during the journey from Burton on Trent to Sellafield. It was loaded inside the factory by two overhead cranes, then a mobile crane unloaded it at the other end. Total height of load and trailer was 17ft 4ins. Police escort all the way. 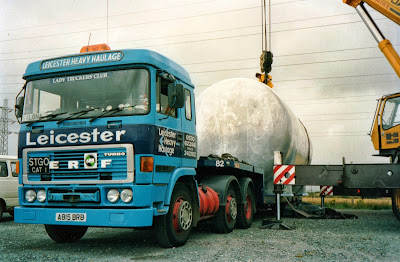 Police escort not needed for this load, it's only slightly wider than the trailer, but very heavy. My clapped out old motor struggled to climb up the long steady slope of the A2 to Dover. They were building a new ramp for the ferries. I had several sections which would be assembled to make the roadway that the cars use to drive on and off the boat. 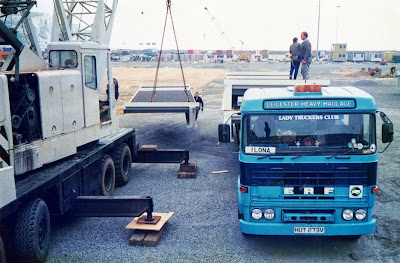 This was a regular job, concrete panels made near Nottingham and unloaded just off Fleet Street in London. We did this for several months while they were building a new office block. The tower crane is starting to lift this section under instructions from the slinger, the man on the ground. 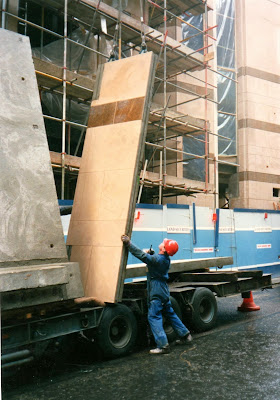 Unloading a prefabricated modular building. The site was all laid out with the groundworks completed. Drop these into place and connect up the services. 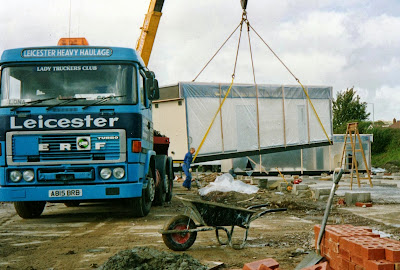 Oh happy days. I wish I had started driving earlier, then I could have maybe moved over to the cranes. I did look into paying for a course at Bircham Newton in Norfolk, but it was pretty expensive, then I might have hit a brick wall when I started applying for a job. I decided to stay where I was, and carry on trucking.
I can't wait for episode three of The Crane Gang. The only thing which niggled me was that the dramatic music is too loud, otherwise a very entertaining programme.
Toodle pip
Posted by Meanqueen at 17:04