Hello, it is me, back from walking in Derbyshire fully refreshed and ready to blog. It is important for me to get away every so often, I feel trapped if I am in the same place for long periods of time. There are a lot of places within an hour or two's driving, with lovely scenery. Might as well make the most of it.
I've been to Hartington Youth Hostel before, I thought it was about four years ago, but when I checked I see it was six years ago. How time flies. I remember this cottage just down the road, with the two trees that meet in the middle. 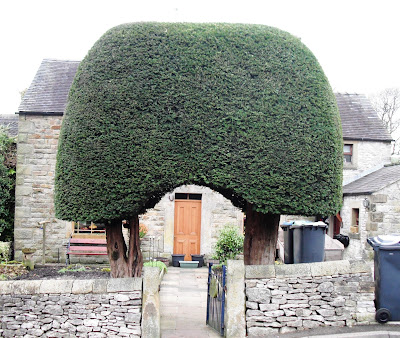 After a lunch stop at Cromford on the first day, I drove straight to the hostel and only had time for a short walk in the afternoon. After a big breakfast the following morning, which was far too much, I set off for a full days walk, taking a veggie sausage and a hash brown with me to eat for lunch.

It was a bit dull, but dry. I made this short video about 20 minutes into the walk.

I crossed several fields to get to Sheen. Mud mud, glorious mud, yuk. Hows this for a Village Hall. A lovely old building. 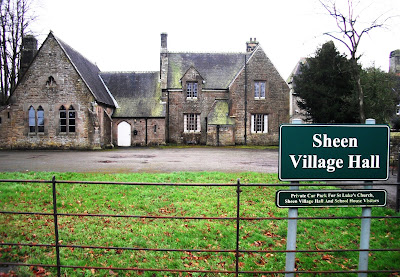 I decided at that point I was going to stick to mainly roads, it's not much fun sloshing around in mud. I got on the road to Townend. A typical country pub in these parts. 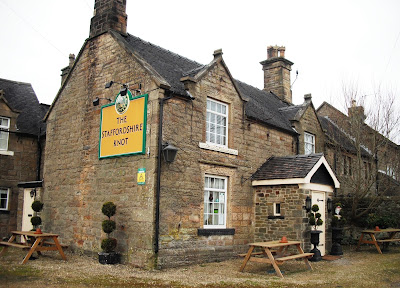 At the road junction in Hulme End is this very picturesque pub. Looks a nice place to stop for refreshments. The Manifold Inn. Not for me though, I want to carry on. 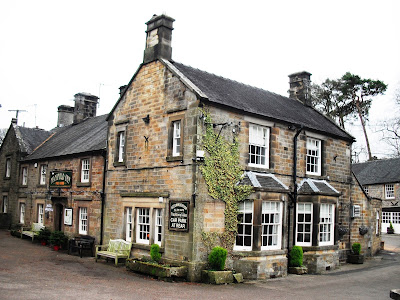 Nearby is the old railway station which is now a Visitor Centre. The disused track is a pathway for cyclists, walkers, and horse riders. I set off heading south The track runs alongside the River Manifold for a long way. 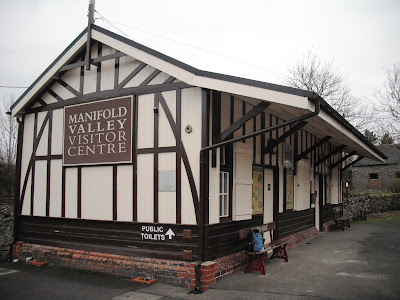 So far down and the track turns into a narrow road and goes underneath the road above it. 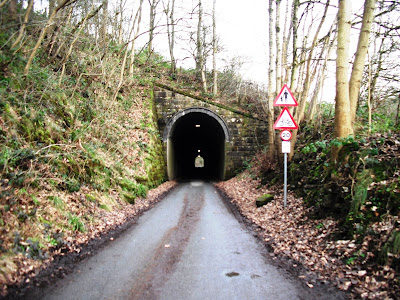 There are some spectacular views, I've zoomed in to this cave across on the other side of the valley. 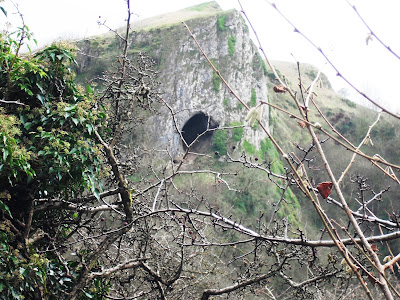 Look at this, big skies, big open spaces. It's starting to brighten up, maybe I'll be lucky and the sun will come out. Just past the cave I decided to come off the Manifold Way and continue on the road to Wetton. It's time I was starting to make my way back. 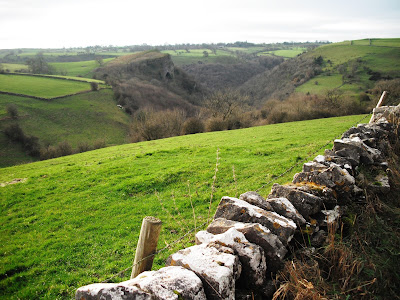 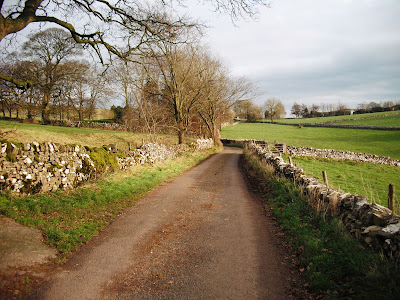 I found a bench on the village green, opposite the pub, and had a bite to eat. I like villages because you never know what you are going to see in people's gardens. Howzabout these giant wood carvings. 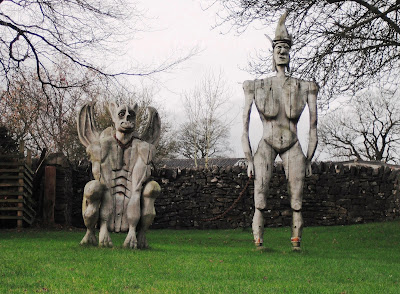 And two very big hands sticking out of the ground. 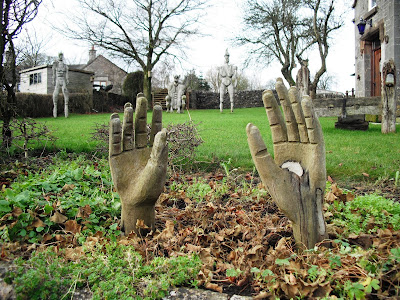 The plaques on the wall of this cottage look a bit arty. 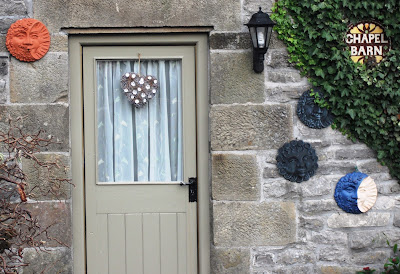 And how about staying for the night in this old chapel, offering B & B. I would like to have a nosy inside. 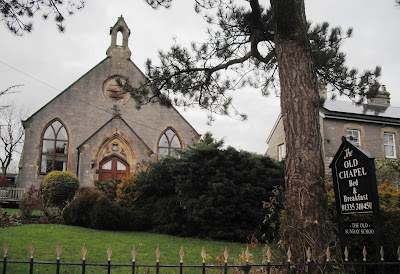 Time was getting on and I needed to head off back. I came off the road and took a track along the bottom of Wetton Hill. The sheep round here don't seem as nervous as some I come across. These let me pass through them as they carried on munching. 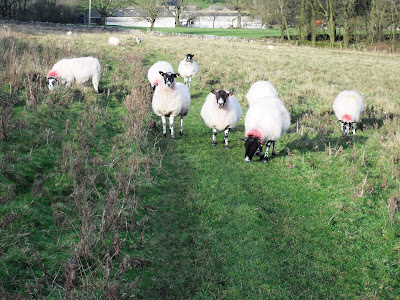 Back on the road again, taking a dead end road to Narrowdale. There are several buildings here which have been abandoned. Not a soul about. 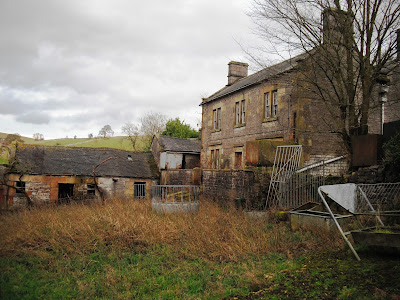 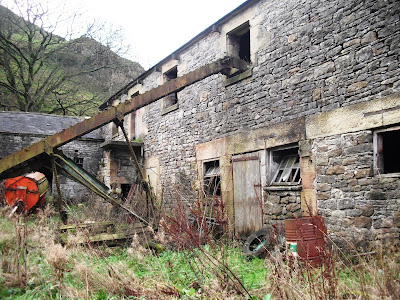 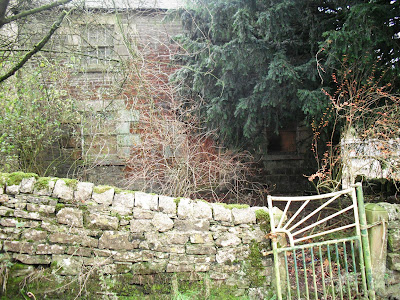 No time to linger, less than an hour left of daylight. Onward I went, looking for a track to go towards Beresford Dale. It is the shortest distance back to Hartington, and I have walked some of the route before, even though it was six years ago.

Something wasn't working out. I should have come to a T junction a lot sooner than I did. I lost my bearings, there was a signpost, but nothing on it indicated where I wanted to be. After twenty minutes I realized I was no where near where I thought I was, I must have taken a wrong turn. Nothing for it but to backtrack. I needed to get to a road. I had torches but they are no good in the pitch black open countryside if you don't know where you are. Getting onto a road would be easier.

After ten minutes or so I saw two walkers coming towards me, and asked if they knew where they were going. They did, I said I had gone wrong and needed to get back to the road. After a brief discussion these kind people said they were going back to their car at Alstonefield, and if I went with them they would give me a lift to Hartington. What a relief. No doubt I would have got back anyway, but their offer made it a bit easier for me. They dropped me at the hostel door just before four o clock. Altogether I walked 11 miles. I know exactly where I went wrong, it was at the derelict buildings. Too busy taking photo's and not noticing a footpath around the left side of them.

The evening meal was pizza, it was massive, far too much for me. I wrapped half of it up to take with me for lunch the following day. I have some pictures of the hostel for another post.

Back to normal now. There were some embroidery magazines in the quiet room so I had a good read of them. Given me lots of ideas for artworks.

Thanks for popping in, more tomorrow.
Toodle pip