Reading all the comments that have appeared on John's blog after he announced that he was taking a few days off, has made me realise how happy I am that some of my readers have fallen by the wayside. I suspect that is because they don't like what I say, which is fine by me.

A few years ago when people were clamouring for money saving tips, and how to live frugally, it was a massive job for me to give people exactly what they were looking for. I put myself out there, passing on what I had learnt, trying to help others with their budgets, on television, radio, newspapers and magazines. The pressure was on to know all the answers, and share them.

Years previously I was in a similar situation, being the only female lorry driver around. All of a sudden I was the star of the show, everyone wanted to know me. I started the Lady Truckers Club because I wanted to help other women get into the business. I built a support network. I put myself out there, and for a few years all I was doing was driving full time and running the club. I didn't have any time for anything else.

John has built up an army of followers with his imaginative and sensitive writings. His compassion for the human race is admirable. He shares every aspect of his life, and people want more, the pressure is on him to keep going.

I do not want to be in that position. When I see how dependent people are on their daily dose of life in a Welsh village, with outpourings of sadness when it comes to a halt, I find that quite worrying.

I can only take so much responsibility for other people. When it reaches the point of saturation I have to stop. I have to pull up the drawbridge and say no more. I will only give so much. Ok, it is nice to know when someone cares for me, when someone values what I do, but I don't need constant reminders.

The pressure to perform can be overwhelming, the only way to cope with that is to step back, have a breathing space. If I got a hundred comments from people saying they miss me and can't wait for the next blog post/video, I would be running for the hills. I don't want that. 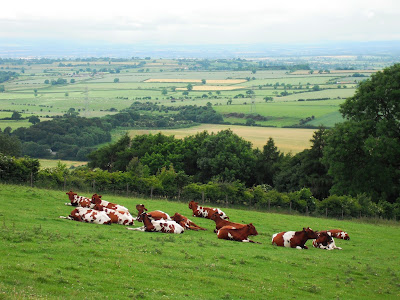 Thank you for popping in. Comments are optional, if you feel like it, if you don't that's ok. Have a nice weekend. Toodle pip.   ilona

Email ThisBlogThis!Share to TwitterShare to FacebookShare to Pinterest
Labels: blogging, reflections on life