Small bag to make, with instructions.

Another windy and wet day, and more sewing. This time it's a smallish pouch which could be used in a variety of ways. Closed it is 7 inches by 5 inches, and has a boxy bottom. This is the first one I made, it is so simple. There is very little stitching involved it could be made by hand as well as machine. A strap could be attached to the tabs on the sides to hang it around the neck, or a thin belt could be threaded through them. It could be a purse, or even a camera case. 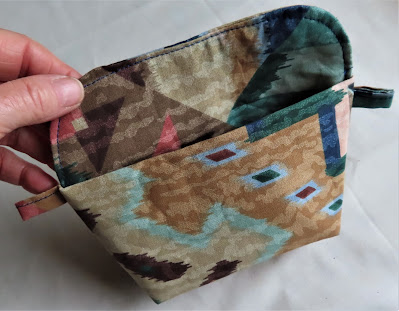 This one hasn't got the tabs, I forgot to put them in. A wide loop could be added at the back to thread a belt through it, to make it a bum bag. 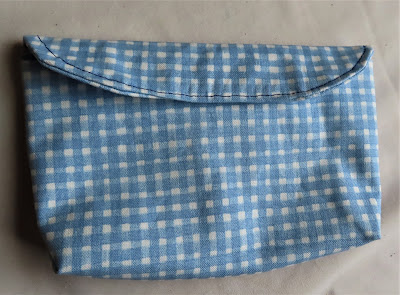 I added velcro to fasten the flap down. You could have a loop and button, or a press stud. 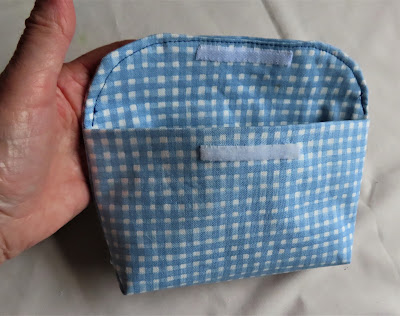 The boxy bottom is achieved by some clever folding, no stitching required. 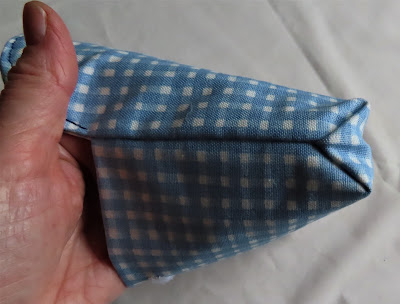 If you feel like having a go, it only takes about an hour to make. Make a few notes when you first watch the video, then go back to it for reference. Thanks to the yoootooobers for putting these bag making instructions out there.
It looks like we are going to have a Boot Sale in the village, a lot of people are interested. I shall be joining in, if the weather is nice.
I did a late Aldi shop last night, not as late as I normally go because it was a Bank Holiday and they changed closing time from 10pm to 8pm. It was raining so that keeps people at home. As usual the shop was almost empty, one other person came in and picked up a basket. I was the last one to be chucked out at 8pm. I just made it back to my car when the heavens opened and the rain lashed down. I filled up with petrol at a convenient 24 hour garage nearby. As I arrived back home the atmosphere was very mysterious. The rain had almost stopped, there was a heavy mist hanging in the air, and the sun was glowing through the haze. A perfect rainbow could be seen over the houses.
I think I might need to take my chances and go for a walk now as it's stopped raining. Still windy though. Thanks for popping in. We'll catch up soon. Toodle pip. ilona
Posted by Meanqueen at 14:51